Even rural America can have good public transportation 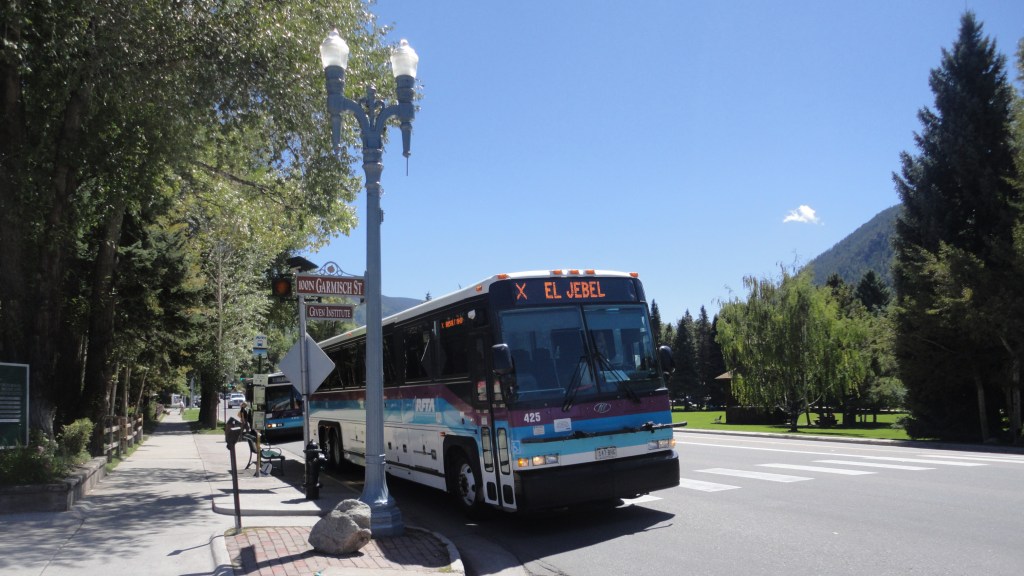 Even rural America can have good public transportation

When I travel to a rural area, I assume that renting a car will be a necessity. In fact, I assume it in much of the U.S. Except in a few older coastal or Upper Midwest inner cities, it’s hard to get around in America without driving. So imagine my surprise upon arriving in Aspen, Colo., for a reporting trip and the Aspen Ideas Festival, and finding that a surprisingly good bus system and bikeshare program could get me almost everywhere I needed to go. And it didn’t cost an arm and a leg — just an arm. A broken arm. It turns out Aspen is so pro-pedestrian that it can actually create difficulties for visiting cyclists. But that’s not the worst problem to have.

Aspen and its neighbors along the Roaring Fork River high in the Rocky Mountains, such as Carbondale, are old mining towns. Developed in the late 19th century, they have walkable downtowns. To help residents and visitors get around or between those downtowns, they have a recently expanded bus service. The regional bus stops along Route 82, the road connecting the towns, with parking lots at the outlying stops, like a suburban commuter-rail station.

Local environmentalists I spoke with raved about the bus system, which may partly reflect the low expectations we’ve all developed for rural mass transit. Still, there were 4.1 million rides on Roaring Fork Transportation Authority (RFTA) buses in 2013, a 4 percent increase over 2012. That’s impressive for a region with only around 32,000 residents (though the seasonal population can increase substantially from tourism). If you’re in a downtown area, there will be a stop walking distance from you. The buses come frequently enough despite the small local population. The system is even integrated with other modes of transit: Many buses are outfitted with a bike rack in front and at certain stops you can load your bike on.

And it isn’t like in some Sun Belt cities where bus riding is a stigmatized habit of poor people. While the system’s primary purpose is to take service workers from the less expensive towns where they live to their jobs in Aspen, I saw tourists and members of the second-home crowd on the buses. Professionals also often commute by bike or bus. Jamie Cundiff, the forest program director at the Aspen Center for Environmental Studies, does both. “My car doesn’t do very well in the snow, so especially in the winter it’s nice not to stress about the snow,” says Cundiff. “If it’s in the summer, I love having the ability to bike one way and bus the other because sometimes the weather is different in the morning than the afternoon.”

But, like many bus systems, this one is confusing to outsiders. Stops are identified in a local jargony shorthand, like “ABC” for the “Airport Business Center,” and there’s no easy way to find out how the nicknames or acronyms correspond to places in the real world. Buses skip stops if there is no one waiting there and no rider requests the stop, but of course out-of-towners often don’t know when to request the stop they want. Even so, with effort, determination, and a lot of communication with the bus driver, one can save the $100 per day it would cost to rent a car.

Still, the system is not quite as advanced as the marketing would lead you to believe. The RFTA’s new “Bus Rapid Transit” line is actually nothing of the sort: It’s just express bus service. It makes fewer stops — only nine on its 41-mile route — and it doesn’t wait for other buses to arrive so that riders can seamlessly transfer, as the local buses do. But real BRT has a dedicated lane and a number of design elements that speed the loading of passengers, such as fares paid ahead of time at the stop, instead of on the bus. In a rural area, these differences probably matter a lot less than they do in a big city. The Roaring Fork Valley “BRT” only has a dedicated lane for a small section of its route, but it’s not like I ever got stuck in traffic as a result. Nor is waiting for people to pay on the bus as big a deal when the bus doesn’t have nearly as many riders as, say, Manhattan’s 2nd Avenue line.

But why call it BRT rather than just an express bus? Because it might make it easier to get funding from local voters and the federal government. Local officials brag that their “VelociRFTA,” which launched in 2013, was the nation’s first rural BRT line. The $46 million cost of the line was paid for partly with federal money and partly by a 0.04 percent sales tax increase in the eight participating jurisdictions, approved by voters in 2008. The proposal was considered politically risky at the time, as the economy was in crisis. Voters, though, were weary of high gas prices and worsening traffic coming in and out of Aspen at rush hour, so 55 percent voted to fund the new line. (RFTA did not respond to a request for comment.)

The whole question of BRT highlights a larger problem, which is that even express bus service relies on the inefficient mechanism of roads and automobiles. Trains can keep to a schedule with a certainty that buses can’t, unless they are shielded from the vicissitudes of traffic in a dedicated BRT lane. (Every RFTA bus I took was precisely on time, but a road blocked by an accident could easily change that.) And trains, of course, are more energy-efficient than cars and buses. The Roaring Fork Valley actually had trains until they were phased out between the 1960s and ‘90s. It’s too bad they’re now gone, but at least the former tracks have been turned into a lovely biking and walking trail, largely managed by the RFTA.

I took a bike ride on that stunningly scenic trail, which runs right along the Roaring Fork River, through a valley with mountains on all sides. And thanks to Aspen’s bikeshare program, annoyingly called WE-cycle, I also used bikes to zip around town.

It was great — until I discovered one of the big downsides of the city’s people-centric transportation policies. On my last full day in Aspen, I was biking down a hill when a jaywalking pedestrian waltzed into the middle of the street in front of me. I slammed on the breaks, flew forward off the bike, landed on my wrist, and fractured my elbow. I stood up to find the woman who’d stepped into my path screaming at me, insisting that I was supposed to stop for pedestrians. I thought she was crazy — she wasn’t in a crosswalk, after all — until I asked a local police officer and was told that is indeed the expectation in Aspen. Pedestrians apparently always have the right of way, and cars and bikes are expected to just stop for them. I’m a firm believer that cyclists should follow the same rules as cars and be considerate of pedestrians — I wrote about this at length just a couple of months ago — but it doesn’t make sense in this context. Unlike a car, a bike can’t stop on a dime without sending its driver flying forward.

So I experienced the good and the bad of the Aspen area’s transportation system. It’s mostly good — cheaper, greener mobility options are helping to maintain the area’s high quality of life. And the bad — well, my arm is still in a sling, three weeks later.