In Ferguson, walking while black was a crime 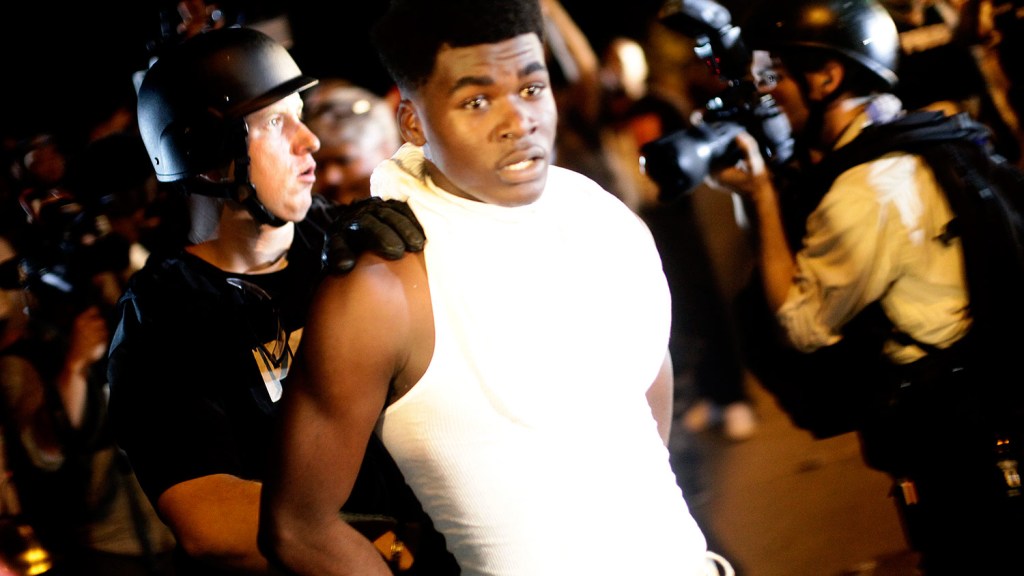 A police officer in riot gear detains a demonstrator protesting against the shooting of Michael Brown, in Ferguson, Missouri August 19, 2014. Reuters/Joshua Lott
Cities

In Ferguson, walking while black was a crime

While forensic scientists and pundits were examining why Ferguson police officer Darren Wilson shot and killed the unarmed, African-American teenager Michael Brown — did Brown strike Wilson first, or did Wilson shoot Brown purely out of racial malice? — I was concerned about why Wilson approached Brown in the first place. Well, it turns out there was something to that.

According to an investigation performed by the U.S. Justice Department into Ferguson Police Department practices, released today, it appears Wilson’s stopping of Brown that day was part of a larger system of racial discrimination and harassment of African Americans throughout the city.

The Justice Department’s investigation concluded that the Ferguson Police Department (FPD) had been engaging in conduct that violates several constitutionally protected rights for African Americans.

“As detailed in our report, this investigation found a community that was deeply polarized, and where deep distrust and hostility often characterized interactions between police and area residents,” said Attorney General Eric Holder, who will soon be leaving his post. “Our investigation showed that Ferguson police officers routinely violate the Fourth Amendment in stopping people without reasonable suspicion, arresting them without probable cause, and using unreasonable force against them.”

A huge part of the evidence found by Justice Department officials was that Ferguson police were picking on black residents for petty issues like walking in the street — what Michael Brown was doing when approached by Officer Wilson. From the report:

More on those walking crimes — Ferguson police engaged in:

… [A] pattern of suspicionless, legally unsupportable stops we found documented in FPD’s records, described by FPD as “ped checks” or “pedestrian checks.” Though at times officers use the term to refer to reasonable-suspicion-based pedestrian stops, or “Terry stops,” they often use it when stopping a person with no objective, articulable suspicion. For example, one night in December 2013, officers went out and “ped-checked those wandering around” in Ferguson’s apartment complexes. In another case, officers responded to a call about a man selling drugs by stopping a group of six African-American youths who, due to their numbers, did not match the facts of the call. The youths were “detained and ped checked.” Officers invoke the term “ped check” as though it has some unique constitutional legitimacy. It does not. Officers may not detain a person, even briefly, without articulable reasonable suspicion. To the extent that the words “ped check” suggest otherwise, the terminology alone is dangerous because it threatens to confuse officers’ understanding of the law. Moreover, because FPD does not track or analyze pedestrian Terry stops — whether termed “ped checks” or something else — in any reliable way, they are especially susceptible to discriminatory or otherwise unlawful use.

The DOJ report said that Ferguson’s approach to law enforcement “both reflects and reinforces racial bias,” and claimed evidence that many of their practices were at least partially due to intentional racial discrimination. These racial malpractices were especially reinforced when it comes to police brutality. The report notes: “Nearly 90 percent of documented force used by FPD officers was used against African Americans. In every canine bite incident for which racial information is available, the person bitten was African American.”

This is 2015, y’all. In two days the nation will commemorate the “Bloody Sunday” march in Selma, Ala., that led to hundreds of unarmed, church-dressed, non-violent, prayerful, Bible-clenching black people getting firehosed, badgered with billy clubs, tear-gassed, and bitten by police dogs. And here we are today, and African Americans are still getting fucking sicced by police dogs.

Once bitten, handcuffed, and arrested, African Americans in Ferguson become lunchmeat for the court system. They are 68 percent less likely than non-blacks to get their cases dismissed by the court, and are 50 percent more likely to have their cases lead to an arrest warrant. Of those arrested for outstanding warrants, 96 percent are African American, many of them poor. In fact, many black Ferguson residents end up in jail because they can’t afford to pay court fees and fines for the petty crimes they are arrested for.

The DOJ report details how Ferguson courts basically bankroll themselves by finding ways to fine these residents. In March 2010, Ferguson’s finance director told the police chief to ramp up ticket writing “significantly” to help raise city revenue. Three years later, not satisfied with a 7.5 percent rise in court fees, the finance director asked the police chief if he could deliver a 10 percent increase.

They impose a particular hardship upon Ferguson’s most vulnerable residents, especially upon those living in or near poverty. Minor offenses can generate crippling debts, result in jail time because of an inability to pay, and result in the loss of a driver’s license, employment, or housing.

DOJ chose not to bring charges against Wilson for stopping and eventually killing Brown. Its memo on that killing suggests a slight connection between Brown’s theft of cigars from a store minutes prior to his tragic encounter with Wilson and the ensuing melee. But the memo also states that when Wilson first drove up on Brown and his friend Dorian Johnson, it was only to tell them to get out of the street and onto the sidewalk. They were walking on a back road where the speed limit was just 25 mph and the two teens were already close to their destination, an apartment complex just a stone’s throw away.

It was only after that encounter that Wilson backed up his Chevy Tahoe to cut the teens off under the suspicion that they might have been involved in the earlier cigar theft. That might be enough evidence for some of you to indict Brown, or even justify his death. But when you consider the DOJ findings of how Ferguson police had harassed, ped-checked, bankrupted, and badgered black residents for years, it’s not difficult to understand why Brown didn’t merely stop and roll over when Wilson first approached.

As I wrote last December, “Wilson’s approach looked less like protecting and serving, and more like abusing and overpowering,” and now we have evidence that that’s exactly what black Ferguson residents had been suffering from for too long.

The Justice Department has issued a number of recommendations to Ferguson police to reverse these discriminatory clashes. Among them:

Other police departments should take note of these, because it’s not just Ferguson that has these problems.