Why Michael Brown had the right to stand his ground 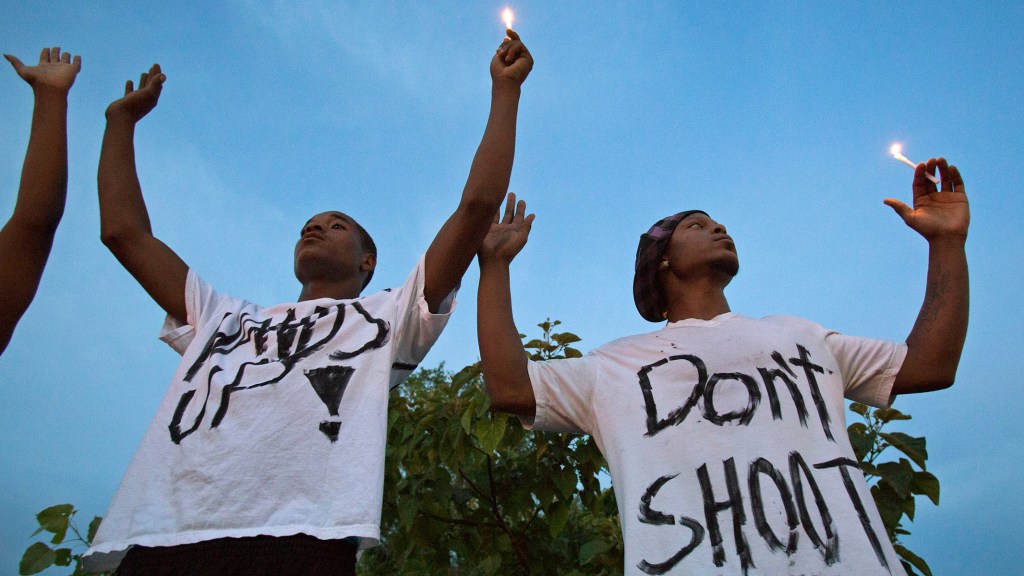 Why Michael Brown had the right to stand his ground

“It’s like trying to fly, but they clipping your wings, and that’s exactly why the caged bird sings; Who can nickname it? The shame rings true. Seems to me reparations are overdue.” — The Clipse

People who are wary and weary of racial profiling think of Brown’s offense more as “walking while black,” as referenced by Eugene Robinson, columnist for The Washington Post and author of the book Disintegration: The Splintering of Black America. Whatever you call it, Brown may have been killed, in part, because he didn’t want to move from the street to the sidewalk.

Considering the racial history of St. Louis, not to mention America, I believe Brown was entitled to stand his ground.

To understand this, you have to understand how we got here. Brown did not end up in a black municipality governed almost exclusively by white people by accident. Suburbs like Ferguson have become the new dens of concentrated poverty and segregation, both predicates for crime. African Americans are six times more likely to live in those areas than white residents throughout St. Louis County, according to the St. Louis Post-Dispatch.

It hasn’t always been this way. Ferguson was incorporated as a city in 1894 as “a commuting suburb for families who could afford to escape the noise and soot of St. Louis,” writes Post-Dispatch reporters. It wasn’t that long ago that Ferguson was 85 percent white.

With the residential composition today flipped, Ferguson has become “home to an out-of-step power structures, where the leadership class, including the police force, does not reflect the rapid demographic changes that have reshaped these places,” explains Elizabeth Kneebone at The Brookings Institution.

“This often translates into inadequate resources and capacity to respond to growing needs and can complicate efforts to connect residents with economic opportunities that offer a path out of poverty,” writes Kneebone, author of the book Confronting Suburban Poverty in America. “And as concentrated poverty climbs in communities like Ferguson, they find themselves especially ill-equipped to deal with impacts such as poorer education and health outcomes, and higher crime rates.”

While white residents have been able to simply move about and start new cities to escape noise and soot, African Americans have not been afforded such luxuries and liberties. For generations, in fact, they have been told where they can and cannot go.

Environmental studies Professor Dorceta Taylor at the University of Michigan goes into this in her latest book, in which she identifies the St. Louis region as a  “Toxic Community.” Her focus is mainly on environmental racism and industrial pollution, but she devotes at least five chapters to examining racist housing, zoning and land use policies. She uses this research as framing for why and how black people end up living in the most undesirable areas with the least amount of control of their surrounding resources.

This was true in St. Louis where one of the keystone fair housing law cases, Shelley v. Kraemer, originated. In 1945, the African-American couple J. D. and Ethel Shelley were hoodwinked into buying property in an area that was restricted only to white buyers. The restrictive covenant specifically mentioned that “people of the negro or Mongolian Race” could not purchase land there. The covenant and others like it had the firm backing of the St. Louis Real Estate Board, the St. Louis Real Estate Exchange, and the United Welfare Association, writes Taylor — and courts upheld them. In Shelley v. Kraemer, the U.S. Supreme Court ruled them invalid, but only if they needed legal enforcement. Racially restrictive covenants that had voluntary compliance were OK, the high court ruled.

It happened in St. Louis’s suburbs, too, like in Blackjack, which is just six miles from Ferguson. In 1970, a nonprofit affiliated with the Methodist Church planned to build federally subsidized townhouses there for low- and moderate-income families. Within nine months of the announcement, the previously unincorporated Blackjack got Inc.’d up and passed a zoning ordinance limiting development to three homes per acre. This “effectively squashed plans for subsidized housing,” writes Taylor. The case had to be decided, again, by the U.S. Supreme Court to finally allow construction in 1974.

As University of Iowa professor Colin Gordon has mapped out, black families moved to places like Ferguson where such restrictive zoning policies weren’t in place. But when the black families showed up, white families moved out. This history explains why the St. Louis metropolitan region has registered some of the highest dissimilarity indices (how we measure segregation) between black and white residents in the nation for virtually the entire 20th century.

The issue boils down to who votes. Ferguson is roughly two-thirds black, but compared with the city’s whites, the community is younger, poorer (the city has a 22 percent poverty rate overall), and, as the New York Times recently wrote, somewhat transient, prone to moving “from apartment to apartment.” All of these factors make black residents less likely to go to the polls, especially in low-turnout municipal elections. And so whites dominate politically. “The entire mobilization side of it is what accounts for the difference,” Kimball said.

This blog from the Monkey Cage in The Washington Post further digs into why the skewed racial outcomes in Ferguson electoral politics.

St. Louis County has also been an epicenter for voting rights violations over the past 20 years, including the 2000 presidential election debacle when over 50,000 eligible voters were purged from voter rolls. The federal government sued St. Louis over this. Missouri, meanwhile, perennially tries to pass a photo voter ID law, which would be just more grain for the disenfranchisement monster — which is why courts perennially block it.

Copious segregation on top of disenfranchisement and excessive arrest tactics by mostly white law enforcement leads to skewed perspectives of who belongs where, in terms of space and land use. How are black youth like Brown supposed to hope for any control over their futures when they have little control over where they can live, much less walk?

The area Brown was perambulating is physically bordered off from much of the rest of Ferguson with “concrete barriers and fencing,” as mandated by the police, as reported by the St. Louis Post-Dispatch. The area becomes unsequestered during school hours, for busing. But when closed, “hundreds of residents have just one way in and out.”

“I am wondering if it is for safety or just to cage us in,” resident Rochele Jackson told the paper.

It echoes the words of The Clipse (above) and rapper Cee-Lo who in describing similar apartment settings in Atlanta  said, “But every now and then, I wonder if the gate was put up to keep crime out or keep our ass in.”

This is why if I was Brown, I wouldn’t have moved at Wilson’s request either. You cage my community off, disenfranchise us through voter caging and then flag me for walking on my own street? No, I’m not moving. Brown might have been unaware of this history, but he inherits the pedestrian right-of-way nonetheless.

This is why tanks, tear gas, and curfews can’t move Brown’s protesting neighbors either. Black people are tired of moving — tired of being told where they can live, work, play, swim and even where they can walk.

The weight of racial history — in Ferguson and throughout America — presses down too heavily on black and brown youth. You can almost picture that history’s foot planted squarely atop Brown’s prone body as it lay in the street for hours while children stood and watched, some of them wondering, no doubt, if this is the future that lies in wait for them.