London — city of famous bridges — has just approved the construction of one more viaduct across the Thames. But this is not just any point-A-to-point-B piece of infrastructure — this bridge will be a destination of its own: an actual park lofted high above the river.

The bridge will connect North London’s Temple neighborhood to the South Bank, supporting 2 million pounds of dirt, 270 trees, and presumably hundreds of tourists. It will feature meandering paths, shady nooks, and outlooks on the city. Pending final approval from London’s mayor, construction is slated to begin late next year, and wrap up in 2018.

In a weird mashup of celebrity influences, the bridge was initially proposed by actress Joanna Lumley nearly 15 years ago, as a tribute to Princess Diana. It was designed by star architect Thomas Heatherwick (of recent Olympic torch fame), and — here’s the crowning gem — inspired by Leonardo DiCaprio’s king-of-the-world moment at the prow of the Titanic. (That this massive project of civic engineering and human ambition takes cues from the most infamous of bungled engineering-slash-ambition of the previous century may not be the MOST ideal comparison, but never mind that.) 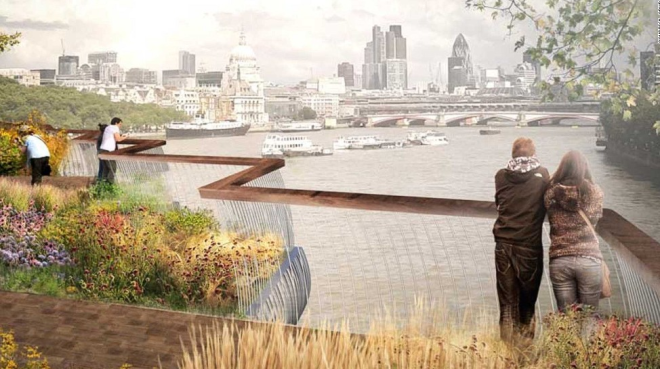 “For the last time, I don’t think I’m allowed to hold you up over the railing.”Heatherwick Studios

It has been compared to the High Line, in New York, which takes credit for putting elevated urban parks on the map, but it looks more like something out of a J.M. Barrie playscape. On the website of the Garden Bridge Trust, the project is described as a kind of reimagining of the city itself: “Its ground breaking design will integrate a new kind of public space into the fabric of the city, adding to London’s rich and diverse horticultural heritage.”

To that, I’ll just add: So long as that “rich horticultural heritage” includes things like this edible staircase. In which case this weird bridge-park is right on track.

There is, of course, some controversy, mostly to do with the bridge’s steep price tag: an estimated $278.5 million, covered in part by public funds. Critics point out that money might be better spent on infrastructure or affordable housing than on a bridge connecting two well-to-do neighborhoods. The bridge’s limited capacity and the possibility of an entry fee may further restrict its utility.

Trust us, we know how bad things can get when you commit public funds to massive infrastructure projects. Still, if I can’t believe in a green, pedestrian-friendly urban future where garden bridges are the beautiful norm, I don’t know what’s worth believing in.