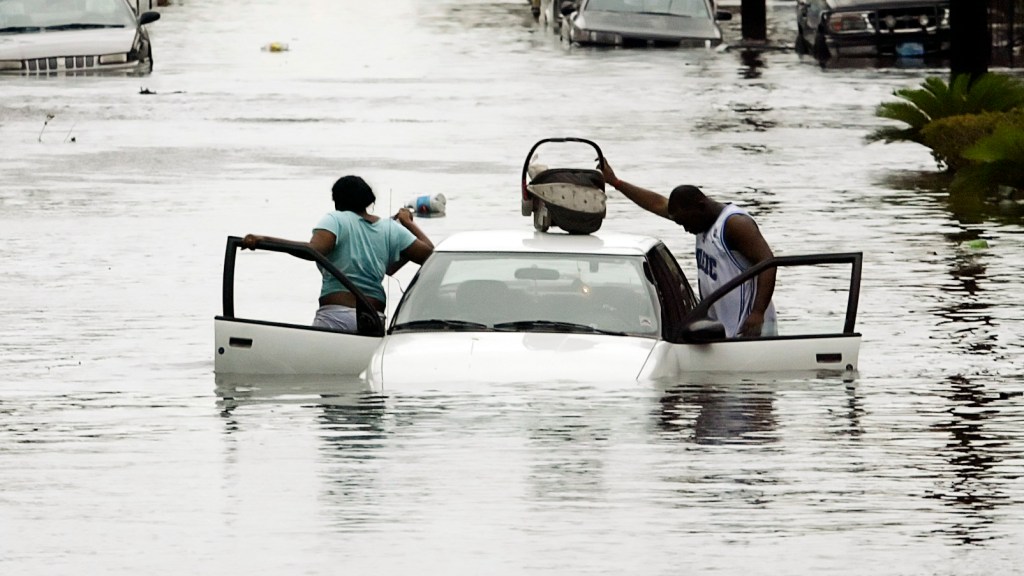 A man puts his baby on top of his car as he and a woman abandon their car after it started to float in New Orleans. REUTERS/Rick Wilking
Cities

Ten years after Hurricane Katrina displaced 40,000 people in New Orleans, opinions about the recovery can be traced along racial lines. A pair of new studies underscores that African American women, particularly those who lived in public housing, faced some of the biggest hurdles after the storm.

Nearly four in five white residents in New Orleans say their state has “mostly recovered,” while nearly three in five African American residents say it has not, according to survey results released Monday by the Louisiana-based Public Policy Research Lab. More than half of all residents, regardless of race, said the government did not listen to them enough during the recovery, but African American women struggled more than any other group to return to their homes in the months and years after the hurricane, PPRL noted.

On Tuesday, a study by the Washington-based Institute for Women’s Policy Research found that recovery policies in New Orleans after Hurricane Katrina largely ignored the needs of African American women who lived in four of the city’s largest public housing complexes. These women were forced to move into more expensive housing, and some had to relocate to areas where they faced racial intimidation.

The study, based on interviews with 184 low-income black women, offers a look at how redevelopment efforts affected some of the city’s most vulnerable residents. A majority of the women interviewed said they wanted to move back to their homes but were unable to do so because city and federal officials demolished the buildings in the years after the storm.

The demolition plan, announced in 2006 by the Housing Authority of New Orleans and the U.S. Department of Housing and Urban Development (HUD), aimed to deconcentrate poverty in the city by replacing the public housing complexes with mixed-income housing. However, the new developments included fewer low-income apartments, which meant many people had to pay more for housing.

The decision to raze the public housing complexes seemed odd to some former residents because HUD had found them to be structurally sound after the storm, the IWPR reported. Here’s what a 70-year-old retired grandmother told the research group:

The buildings were good, strong buildings. Now, if they say they couldn’t be renovated, well, that’s a different story, but they had some buildings in worse shape and they’re doing them over … I’m very disappointed with our elected officials. They turned their backs on us.

Many of the women interviewed by the IWPR said that even though public housing hadn’t been ideal, they felt safest in their former homes. There, they had known all their neighbors, and the brick apartment buildings had withstood the hurricane’s winds and subsequent flooding. There had even been a saying among poor residents in the city that if a storm ever came, you should “get to the bricks.”

One woman who had lived in the C.J. Peete housing project believed the razing of her building was unjustified.

Bad as the waters were, it did not go into our houses. That was one of the projects that I think they just wanted to tear down. They could have left that project there … They had people coming from other places to come stay in the projects, but they never came down because they are brick.

After nearly three decades living in the C.J. Peete complex, another elderly woman with diabetes and arthritis told researchers that she was forced to move temporarily to a community known for Ku Klux Klan activity.

In Baker [where the emergency trailer park for displaced people was], [the crosses] was all over. Ah, Baker was the main headquarters of the Ku Klux Klan … This white man walked up and he said, ah, “If you all would’ve came here in the ’60s … I’m so glad you all didn’t come … Oh, you all would’ve been dead … They would’ve killed you all.” They put us in a pasture where the cows and horses was living. That’s where the trailer was.

To read more of these stories, check out the report by the IWPR here.