For generations raised on Jaws and Sharknado, putting your hands within snapping distance of the ocean’s most awesome apex predator might seem like a very scary prospect — and does the boilerplate “we’re-more-dangerous-to-them-than-they-are-to-us” disclaimer really make anyone feel any better? But selachii-phile David Shiffman gets hands-on with the beasts on a weekly basis.

When not tweeting on behalf of sharks at @whysharksmatter, the 30-year-old PhD candidate helps run shark-tagging research trips for the University of Miami’s RJ Dunlap Marine Conservation Program. Before you can tag a shark, you have to wrest it out of the ocean, hold it down, and get awfully close to those ripsaw teeth without harming the animal, or yourself. Shiffman shared some wisdom from a life spent wrangling sharks for science — including how you can do it, too. 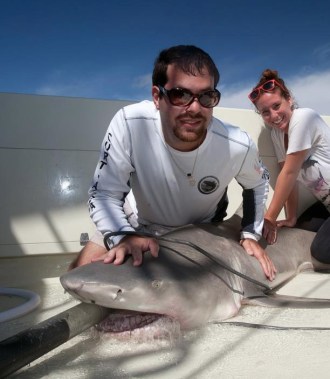 I feel like most kids go through a shark or dinosaur phase. I went through both of those but had to choose. Though I grew up [inland] in Pittsburgh, I read every book I could get my hands on, watched every documentary, went to the PPG Aquarium. In my teens, I got scuba certified and went to marine biology camp in the Florida Keys. Now I’m studying the feeding ecology and food web dynamics of sharks along the Florida coast — basically what happens to the food chain if we lose sharks. Both my masters and PhD research have involved a lot of fieldwork. I’ve tagged close to 2,000 sharks.

We don’t use rods and reels — [instead, we have] ten drumlines separate from the boat, and we deploy them 500 meters apart with a 50-lb. weight at one end. There’s a line to a float on the surface and a baited hook on a long stretch of line so the sharks can keep swimming in circles. We use fresh fish from around the area: Barracuda’s a very smelly fish, and therefore very good for catching sharks. We also use tuna or jack or whatever’s around from local fishermen. With a good-size chunk, we have very little bycatch; the hooks are so large that you need to be a predator with a large mouth. Above 95 percent of our catch are sharks — very occasionally we’ll get a barracuda or a grouper.

Some places [we fish] are only 10 to 15 feet deep. We tell guests that if the boat sinks, just come to the top deck and you’ll still be above water. Other spots are up to 100 feet deep. Our boat is parked in Miami Harbor on Biscayne Bay and one of our sample sites is right off South Beach. We also catch sharks in the downtown area, which helps us learn how sharks use urban waterways. On one research trip, during our downtime, we got lunch at the Hard Rock Cafe downtown.

There’s a shark on the line. Now what?

We tow the line all the way up, get it all the way back on the boat. If there is a shark, we get them on a semi-submerged, portable Jet-Ski dock with a specialized water pump so they can still breathe. We have a team of undergrad interns who push the sharks on their fins — enough to hold the animal down without hurting them.

We say it’s like a NASCAR pit crew: Our team secures the shark, draws blood, gets skin samples, and attaches telemetry devices; [any] guests take detailed measurements. It’s all done hand over hand. Our team inserts a telemetry device through the top of the dorsal fin; if it’s just a soft tag, we insert it in soft spot at the base. The fin has no blood or nerves — it’s like an ear piercing. All our methods are for minimizing stress; as much as possible, we want to make sure we’re not harming them.

When that’s done, we remove the hook, which is a superficial injury caught in the lip; we use circle hooks that don’t cause any lasting damage. We’re extra careful and walk it to the back of the Jet-Ski ramp, securing the shark as much as possible. A member of our photo team gets some very close pictures as we release it. They only have a few seconds: After a workup, the shark just wants to get away.

It takes 15 minutes to explain the process, and we try to be done in two minutes. We drop 30 hooks a day; the highest number of sharks we’ve caught is 17. On a typical day we catch three to five. Many shark populations have declined precipitously: Some days we’ve caught nothing.

Now sit back and wait for the data.

For GPS telemetry tags, when a fin breaks the surface, it sends us an email. Plastic tags have a unique number and ID, so if someone catches the shark they can call us and let us know where it was, how big it was.

We monitor nurse sharks, bull sharks, blacktips — but our major area of focus is in great hammerhead sharks, which are an IUCN Red List endangered species. We’re very interested in their biology and behavior.

Some sharks don’t mind being wrangled. Others haaaate it.

It depends wildly on species, size, and how long they’ve been on the line. Great hammerheads have a very severe stress response. If they fight for too long, they won’t live even if you release them. Tiger sharks basically don’t even react: It’s oversimplified, but we suspect that they are used to being the biggest thing around. They don’t have a trouble response because they are so very rarely used to being in trouble. The largest shark I’ve ever been a part of [wrangling] was a 15-foot tiger shark, and it was completely docile. We always secure it assuming it won’t be docile, but they almost always are. Nurse sharks are the hardest to work up.

No one gets bitten. But that doesn’t mean you can’t get hurt.

The only time I’ve been injured was a tail slap from a five-foot nurse shark. We heard an Indiana Jones whipcrack, and the next thing I knew my back was in a great deal of discomfort. But we try to be very careful to avoid that stuff. We’ve never had a shark-bite injury. A lot of divers are bitten because they pull on the tail or pose for a picture — the shark would obviously prefer that not happen. The shark is more than likely to leave you alone. We teach that you shouldn’t be afraid of them, but be appropriately respectful of their power.

Ready to wrangle a shark? Good news: You can.

Every trip, we bring a group from the community with us. Even if it’s the 75th nurse shark I’ve seen this summer, it might be the first they’ve ever seen. They realize sharks aren’t something they need to be scared of, and we can feed off their excitement. Each year over 1,000 high school students and 1,400 members of the community [join us] to tag 400 to 600 sharks. We also work with corporate groups and private individuals, who we ask for a donation to help pay the cost of Title I schools.

Speak up for sharks.

Sharks are one of the most threatened vertebrates on the planet, and people think, “good” — because they’re scared of sharks. But they are important for the healthy ocean ecosystem that millions of people depend on for food and jobs.

Even if you live far from the ocean, there’s lot you can do. The U.S. has a very participatory fisheries management program; when they are thinking of changing fishing regulations, they ask for comments from the public and listen. So you should comment. Probably the most effective way a so-called regular person can help is through the purchase of sustainable seafood. Sometimes sharks need the food we’re overharvesting; sometimes overharvesting can destroy an entire habitat. Twenty-four percent of all sharks and their relatives are threatened or endangered; it’s the worst conservation crisis you’ve never heard of. The wonderful/terrible thing about social media is it gives everyone a voice. Follow reliable individuals, mainstream scientists, and conservation groups. Learn what’s happening, tell your friends, tell your families, tell your coworkers.