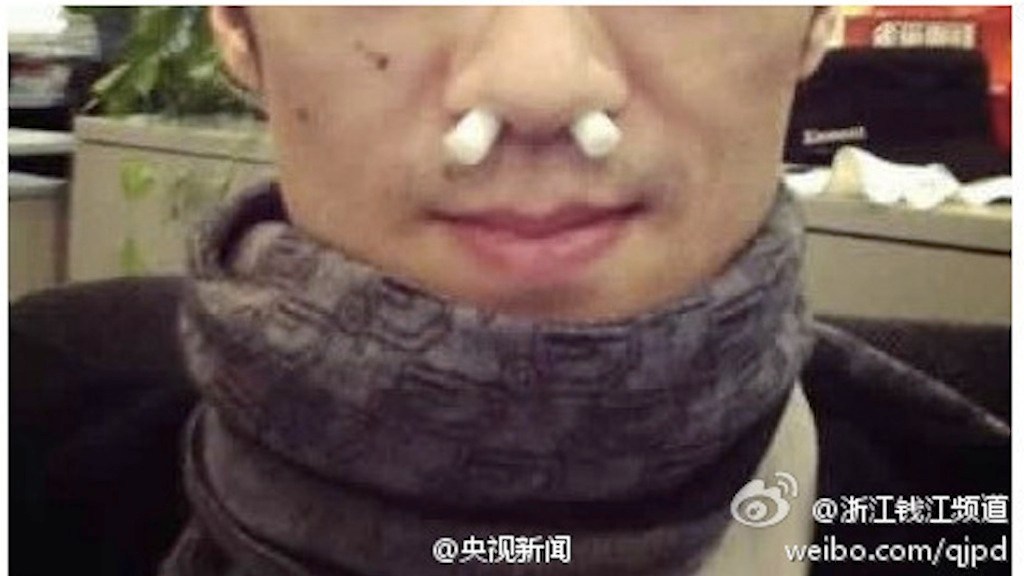 Beijing’s smog is legendarily bad — on some days, stepping outside is kinda like trying to breathe in an ashtray. So it’s not that surprising that someone on Sina Weibo, China’s equivalent of Twitter, decided to deal with the pollution problem by shoving cigarette filters up his nose.

Rumors have spread over the Internet in China that taking cigarette filters and inserting one into each nostril can block the tiny PM2.5 particles of pollution that make breathing difficult and cause respiratory ailments. Some people have posted pictures online demonstrating the technique, although it was often unclear whether the pictures were in jest or in earnest.

“A magical fix for coping with the haze,” said one message that has been repeated many thousands of times on Sina Weibo, a microblog site that is China’s most popular equivalent of Twitter. “Take two cigarette filters, strip away the wrapping paper, and insert them in the nostrils.”

This definitely seems like it might be at least partly a joke, but the photo and concept went so viral that Beijing Youth Daily consulted an expert on whether the method would work (verdict: “unreliable”). And the Changsha Evening News warned that it could even be harmful: “Doctors have stated that this technique will definitely obstruct air entering the nasal cavity, and will affect normal breathing.” On the other hand, you’re kind of damned if you don’t: “There’s no doubt you die if you don’t breathe, but constantly breathing amounts to slow suicide,” said a Sina Weibo commenter.

If you’re going to go with this method of smog suppression, may we suggest that you use the entire (unlit) cigarette instead of breaking off the filter? That way even if it doesn’t work — and it won’t — you can still pretend to be a walrus.