Now for the next injustice: If you live in Minneapolis or St. Paul and you’re not white, it takes longer for you to get to work. A new study put together by four Minnesota nonprofits found a pretty astonishing “transit time penalty”: Asian Americans, African Americans, and Latinos living in the Twin Cities spend anywhere from 11 to 46 more hours a year commuting on public transit than whites do.

And if you compare those numbers to white drivers, nonwhite transit riders are spending way more time commuting. Here’s the breakdown, from the study: 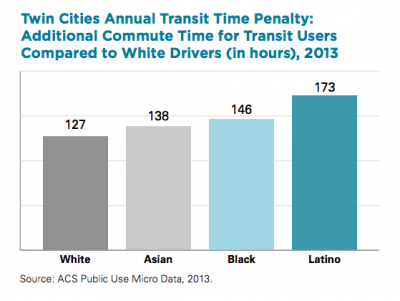 Translation: Black and Asian transit users lose the equivalent of 3.5 weeks of work each year because of their long commute-times alone. For Latino transit users, it is nearly 4.5 weeks.

Combine that with the fact that significantly more nonwhites are commuting via public transit – in Minnesota and across the country — and you’ll see that this is just stitched through with all kinds of messed up urban policies and socioeconomic injustices.

In Minnesota, this study finds, 8 percent of Latinos, 10 percent of African Americans, and 29 percent of Native Americans commute to work on public transit, versus just 5 percent of whites and Asian Americans. But thanks in large part to ongoing patterns of development and displacement, low-income communities of color experience not just longer commute times than whites, but shittier service, too:

Infrequent service, indirect routes, delays, overcrowded vehicles, and insufficient shelter at bus stops contribute to the transit time penalty both quantitatively (adding minutes to a trip) and qualitatively (increasing the stress of the experience).

And thanks to a national car-loving ethos that puts roads and freeways above buses and trains, public transportation sucks – across the board! Nationwide, public transit commutes take twice as long as car commutes.

That’s not the only reason just 5.2 percent of U.S. commuters take public transit to work and more than 75 percent drive alone in their cars. But still. As long as there’s a dearth of quick and reliable transit options, it’s going to continue to encourage car ownership. This study points out, for instance, that just 15 percent of jobs in the Twin Cities region have good public transit connections, “resulting in working families in the Twin Cities spending more on transportation than on housing.”

And that is a huge deal when it comes to racial and economic equity. Research shows that access to adequate transportation has an enormous impact on the odds of escaping poverty. Makes sense: an unreliable bus takes a huge toll on your chances of keeping a job. But as one Harvard study suggests, it’s actually commute length that has the biggest impact – beyond crime rates, test scores, or the percentage of two-parent families in a community. According to an article on the study and its implications in the New York Times, “The longer an average commute in a given county, the worse the chances of low-income families there moving up the ladder.”

So there’s another very good reason to adequately fund public transit, America: Not only will it help the planet, it will seriously improve the lives of lots and lots of low-income Americans.