Earlier this week I posted a long account of Seattle’s ill-fated efforts to build a tunnel to replace the Alaskan Way Viaduct, an urban highway that cuts between downtown and the waterfront. It’s about to fall down, you see, like the similarly designed Cyprus Street Viaduct in Oakland, which collapsed in an earthquake in 1989, squashing 42 people between levels. Originally Seattle’s viaduct was slated to come down in 2012, but the tunnel project has pushed it back to 2016 (or maybe farther), endangering more Seattle drivers.

Despite that post’s prodigious length, I’ve since been reminded of a few things I forgot. So here are three more reasons to feel bad for us Seattleites.

1. A tunnel expert warned us about all this.

In 2010, when alternatives to the viaduct were under consideration, then-mayor Mike McGinn hired a tunnel expert named Thom L. Neff to assess whether the geology around the viaduct was suitable for a tunnel. Neff reviewed all the extant documents and literature; his report is here. It concludes:

Given the level of current design and the risks identified in constructing a tunnel of this magnitude, there is a reasonable expectation that costs and schedule could exceed current estimates.

Neff warned that the project was “beyond precedent,” with the largest single-bore dig ever taking place in “the worst geologic environment I’ve ever seen,” beneath the water table, under considerable water pressure, through highly varied soil conditions. He made various recommendations, including the creation of a reserve fund, a more equitable division of risk between the Washington State Department of Transportation (WSDOT) and its contractors, and the transfer of real-time monitoring responsibilities to WSDOT.

He was ignored. Seattle City Council member Nick Likata dismissed the report, saying, “The only thing he said that is in alignment with the mayor is this is a big project, and it’s risky, but we already know that.”

I guess we know now, eh?

All the viaduct alternatives were measured against the same metric: Seattle’s projected traffic. But what if those projections were wrong?

You may know that national vehicle miles traveled (VMT) peaked in the mid-2000s and, in 2007, began declining for the first time in the post-war era. There are good (if not dispositive) reasons to think that this trend is permanent.

But the U.S. Department of Transportation has not gotten the memo. This is from a Sightline post: 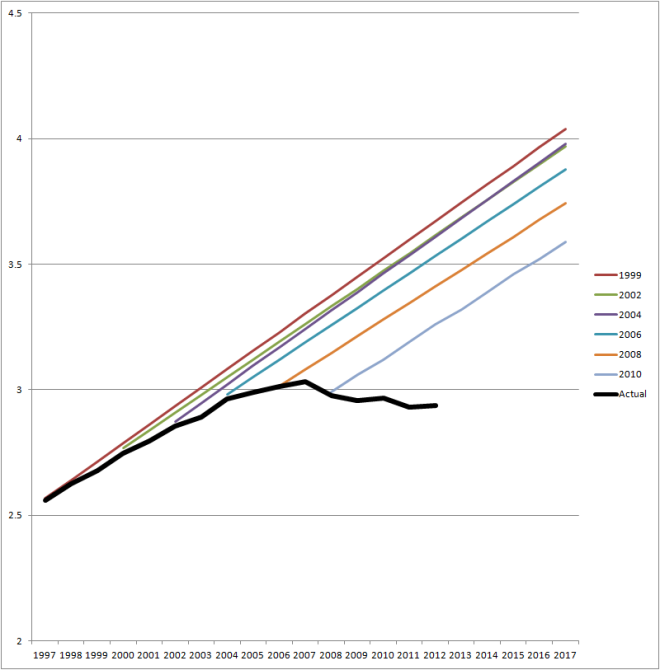 The black line is national VMT. The colored lines are USDOT’s traffic projections. See a theme?

Is WSDOT any better? Well, here are its projections for the 520 bridge, Seattle’s other ongoing transportation megaproject fubar, from another post on Sightline: 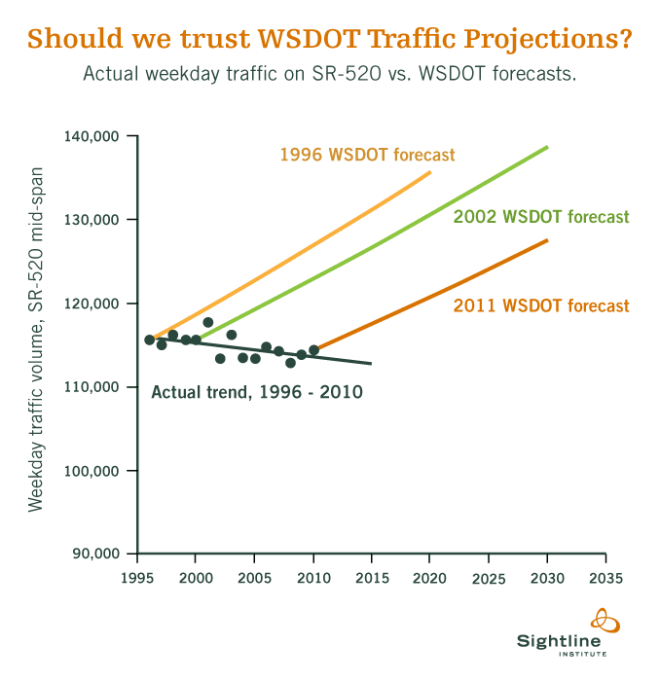 WSDOT is not appreciably different than USDOT on this issue; their long-range forecasts for 2008 ended up overestimating VMT by well over standard deviation (see pg 9 here) but despite that error, their 2010 model predicted [traffic] would return to 20th century growth rates in 2011, and continue on that trajectory until 2030, essentially replicating the now evident folly on the graph above. But the declining trend in Washington dates back over a decade — there were fewer VMTs total (not per capita in this growing region, but total) in 2012 than 2002. And WSDOT is still using these clearly broken projection models.

See this extensive analysis from the Congress for the New Urbanism for more.

Point being: A lot of the support for the tunnel, and a lot of the scaremongering against the surface/transit option, was based on WSDOT traffic projections that are almost certainly high of the mark.

Speaking of scaremongering, critics of the surface/transit option were convinced that it would flood nearby streets with traffic. All those cars that used to use the viaduct would just fan out through downtown, right?

Turns out not so much. Dominic Holden tells the tale:

The city hired consultant Nelson/Nygaard in 2008 to explore maximizing surface streets, optimizing lanes on I-5, and improving certain transit corridors through downtown. It concluded that it would cost $3.3 billion — almost a billion dollars less than the tunnel project — and would perform as well as, and in some cases better than, the tunnel.

The most compelling evidence for I-5/surface/transit is buried in the state’s own [supplemental draft impact statement]. In an appendix of a transportation discipline report, WSDOT cites the miles of travel, hours of travel, and hours of delay that would exist if we built the I-5/surface/transit option. To compare that data to the tunnel, The Stranger filed a records request with the City of Seattle to obtain the most recent data the state is using to forecast miles traveled, hours traveled, and hours of delay on the tolled deep-bore tunnel.

In other words, for an extra billion dollars (and counting), the tunnel will result in slightly more downtown traffic than the surface/transit option. And that’s according to the state’s own data!

Part of the reason the tunnel won’t reduce downtown traffic is that, contrary to WSDOT’s rhetoric and the whole conceptual model behind the tunnel, most traffic on the viaduct is not trying to bypass downtown. Rather, most trips on the viaduct begin or end there. The CNU analysis finds, “Most of the viaduct traffic during peak traffic periods gets on or off SR 99 in central Seattle, and is not through traffic.” As Holden says, “what drivers need from Highway 99 — what they use it for — isn’t a bypass mechanism, but a downtown delivery system.” The tunnel, which, again, has no exits downtown, will be useless for that.

Add to that the fact that the tunnel will be tolled — originally proposed at around $4, now down to $1, which is unlikely to raise enough money to cover Seattle’s part of the project costs. As commenter Morgan Kay pointed out under my last post (annoyingly, I can’t link to individual comments), the toll will either be high enough to make Seattle real money, in which case it would divert too many drivers, or it will be low enough to attract more drivers, in which case it wouldn’t make enough money.

People remain convinced that if you yank out a highway, traffic will get worse. It’s intuitive. But the truth is counterintuitive: there’s a growing mountain of evidence that building a road creates traffic (it’s called “induced demand”). Similarly, removing a road can destroy demand. Indeed, CNU’s analysis found that 28 percent of viaduct traffic would simply vanish if it weren’t replaced.

Anyway, we could have gotten rid of the viaduct, improved downtown mobility, and revitalized the waterfront, all with no more downtown traffic than would have resulted from the tunnel boondoggle. For a billion less (and counting). D’oh.

To sum up: Experts knew (and publicly reported) that the geology around the tunnel was difficult and that delays and cost overruns were likely; the traffic projections on which the project was based were almost certainly too high; and best of all, the tunnel is unlikely to improve downtown traffic relative to the option of tearing it out and improving transit and surface streets. (This is all, of course, in addition to the problems I pointed out in my last post.)

Seattle leaders need to shake off their torpor and do something about this before billions more dollars are thrown into a big hole.