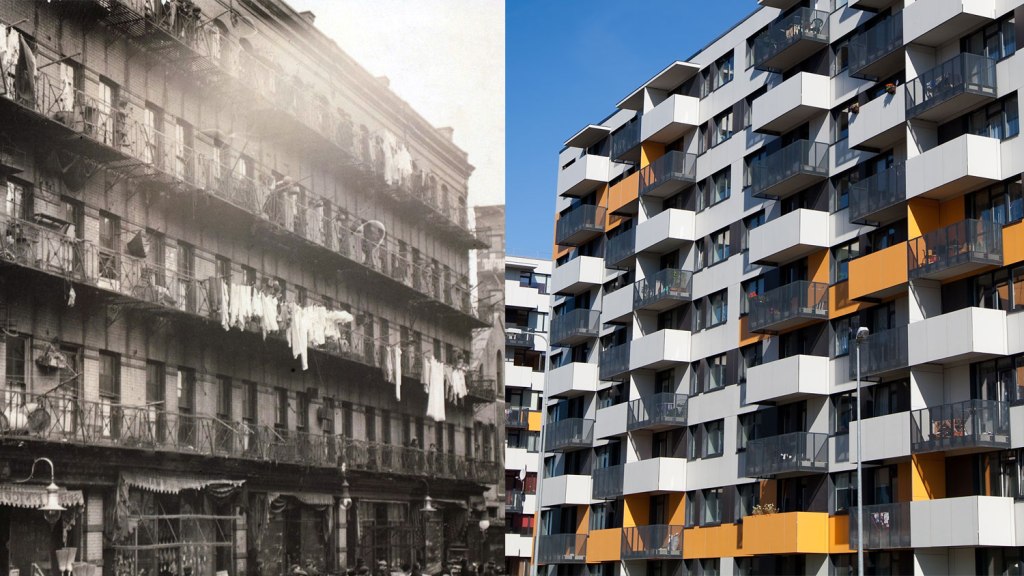 I never thought of my grandfather Harry as someone who lived his life on the cultural or aesthetic cutting edge. He worked his whole adult life as an accountant for New York City, and retired to a ranch house in Plantation, Fla. But he was about 80 years ahead of what The New York Times tells us is a new trend: the micro-apartment.

Harry Adler grew up in tenements on Manhattan’s Lower East Side, where toilets were shared down the hall. As a young adult, he lived in a residential hotel in Brooklyn Heights that now serves as a college dormitory.

Now the idea of building centrally located apartment buildings with small, one-room units has suddenly taken hold, and not just in coastal cities like New York and Seattle. Micro-unit buildings are being developed all over the country, from new buildings in Columbus, Ohio, to a former hotel in Denver.

On Friday, the Times introduced readers to “My Micro NY, the city’s first micro-apartment complex, at 335 East 27th Street, with 55 units ranging from 260 to 360 square feet.” The units are studios and they fetch a terrifying $2,000 to $3,000 a month. Nothing is cheap in Manhattan. But many childless adults are willing to accept less private space in exchange for prime location and building amenities. What makes this notable from a policy perspective is that it has been illegal since 1987 to build apartments this small under the New York City zoning code. This project got special permission, and it may lead to zoning code changes that allow units smaller than the current minimum of 400 square feet.

From reading the Times story, you might think that this was a new idea. But as my grandpa and so many others from his generation could tell you, micro-units have long been the norm. They weren’t called “micro-units,” of course, or micro anything. Back then it wasn’t assumed that Americans would all live in massive private homes.

The Times does acknowledge that there are already small apartments in New York: “Micro-apartments that were built before the zoning rules were enacted in 1987 exist throughout the city. There are some 3,000 apartments under 400 square feet in Manhattan alone.”

But the tiny, overpriced Manhattan studio is just one example of the lost art of super-compact urban housing. There used to be many thousands more single-room housing options, but they weren’t apartments as such. Alan Durning, executive director of Sightline Institute, a Seattle-based sustainability think tank, wrote a good primer on this for Slate, an adaptation from his book on affordable housing, in 2013. Durning writes:

Most Americans live in houses or apartments that they own or rent. But a century ago, other less expensive choices were just as common: renting space in families’ homes, for example, or living in residential hotels, which once ranged from live-in palace hotels for the business elite to bunkhouses for day laborers. Working-class rooming houses, with small private bedrooms and shared bathrooms down the hall, were particularly numerous, forming the foundation of affordable housing in North American cities. Misguided laws and regulations almost wiped out these other kinds of housing, with disastrous consequences.

Watch many an old movie and you can see single adults, if they don’t live with their parents, living in one of these more communal forms of housing. Many New York brownstones were used as rooming houses, with renters taking a room and sharing the kitchen and bathroom. Since kitchens and bathrooms are the most expensive components of housing, these arrangements were more affordable.

Laws intended to improve fire safety and stop the spread of disease — and sometimes also to eject low-income immigrants from certain areas — started banning many of these configurations. Operating rooming houses or subdividing apartments into smaller spaces became illegal. In the post-war “urban renewal” era, policymakers foolishly attributed the social pathologies of impoverished neighborhoods to overcrowding and substandard housing stock. They tore down old tenement buildings and replaced them with bigger homes that the poor could not afford, surrounded by parking lots they did not need. Many of the residential hotels and single-room occupancy buildings (S.R.O.s) that do still exist are in neighborhoods, like San Francisco’s Tenderloin, where affordability is threatened by gentrification.

Our unsustainable, socially isolating over-consumption of private housing is similar, and related, to our over-consumption of private transportation. They are manifestations of the trend toward suburban sprawl, driven by misguided public policy. Last year, the average size of new homes built in the U.S. reached an all-time high of 2,600 square feet, with only 4 percent of homes built being 1,400 square feet or less. This might sound like the free market at work, but it is actually the product of a web of government policies, from the federal home mortgage interest tax deduction, which subsidizes buying larger homes, to the failure to properly tax the climate and air pollution from gasoline, to local rules banning smaller units or requiring more parking than is needed.

Now, just as micro-units are making a comeback, we’re beginning to see the return of another urban innovation of old — streetcars, which plied the streets of cities large and small until the 1950s. My grandfather, despite living for decades in East Flatbush, an outlying Brooklyn neighborhood that didn’t have a subway station, didn’t own a car until he was nearly 50. He took the trolley, and then later the bus, to the subway for many of his commuting years. This was typical in the first half of the 20th century. Then total mass transit ridership declined for decades as streetcar tracks were paved over, train lines were taken out of service, and streets were retrofitted for parking and driving instead of walking. Mass transit ridership returned in 2013 to its highest point since 1956 — but there are now nearly twice as many Americans as in 1956, so mass transit ridership is still proportionally only half as high as it was back then.

Living in a 2,600-square-foot house and owning a car simply isn’t affordable for many people — especially when you factor in the costs of fuel to heat and cool that house and keep the car running. That’s one reason homelessness spiked in the suburban sprawl era. Durning explains how the old options were more economical: “Concentrated near downtowns, rooming houses and other forms of residential hotels provided quintessentially urban living. The dense mixture of accommodations with affordable eateries, laundries, billiard halls, saloons, and other retail establishments made life convenient on foot and on slim budgets.” They also made life more ecologically sustainable.

If New Yorkers will pay up to $3,000 for a studio so small it is normally illegal to build, there is clearly a lot of demand for smaller, denser housing. It’s time to bring it back.