Take Paris’s transportation system, Tokyo’s water infrastructure, Moscow’s combined heat and power supply, and Seoul’s wastewater services, and you’ve got yourself a pretty sustainable megacity. Sorry, New York — turns out you don’t bring much to the table, except maybe that can-do attitude.

That’s what a group of researchers found when they analyzed how energy and materials flow through the world’s 27 megacities (metro areas with populations of 10 million or more people). As of 2010, these sprawling metropolises housed more than 6 percent of the world’s population, and they’re only expected to grow in number and size. So in a paper published this week in the Proceedings of the National Academy of Sciences, the researchers were all like, “Hey! Unless we want to end up with a bunch of bleak, garbage-filled dystopian wastelands, we should probably greenify these puppies.” 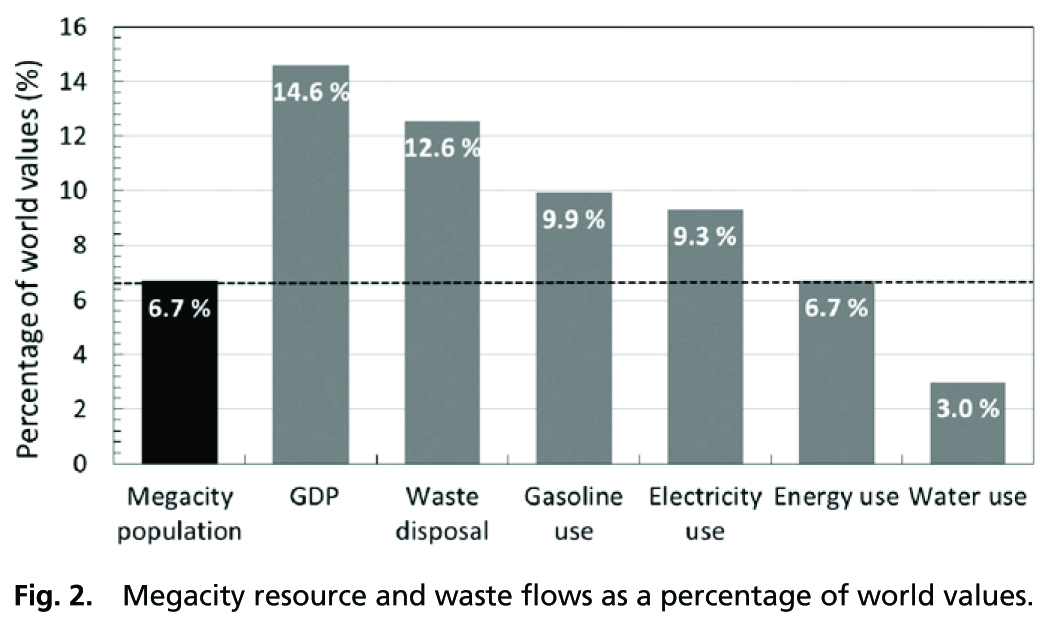 Proceedings of the National Academy of Sciences USA

The takeaway? Megacities consume a lot of resources. That’s not too surprising, given how much they contribute to global GDP. Still, when the researchers looked at each city’s unique “metabolism,” they found plenty of room for improvement.

Let’s start with New York, which definitively sucks when it comes to energy use, water use, and waste production:

Click to embiggen.Proceedings of the National Academy of Sciences USA

“The New York metropolis has 12 million fewer people than Tokyo, yet it uses more energy in total: the equivalent of one oil supertanker every 1.5 days. When I saw that, I thought it was just incredible,” the University of Toronto’s Chris Kennedy, lead researcher on the study, said in a press release.

This might come as a surprise to those of us in the U.S. who have come to know the city as somewhat of an urban sustainability darling, thanks to former Mayor Michael Bloomberg. That’s because New York the megacity is much different than New York the city. When you account for the sprawling suburbs, Kennedy said over the phone, “New York has a completely different face to it.”

We already knew that suburban sprawl led to more energy consumption due to increased transportation demand, but Kennedy and his colleagues found another reason to dislike the ‘burbs: Electricity consumption per capita strongly correlates with land use per capita. It’s pretty intuitive, when you think about it — a house in the suburbs is going to require more electricity than a tiny apartment in the city. That wouldn’t be so bad if all that electricity was coming from clean, renewable sources, but it’s usually not.

And then there’s the issue of wealth. “”Wealthy people consume more stuff and ultimately discard more stuff,” Kennedy said in the press release. “The average New Yorker uses 24 times as much energy as a citizen of Kolkata [formerly Calcutta, the capital of the Indian state of West Bengal] and produces over 15 times as much solid waste.”

The researchers report that the Tokyo metropolis, meanwhile, has a better public transportation system and is better designed for energy efficiency. The largest megacity, with a population of about 34 million people, Tokyo also has a remarkably efficient water supply system with leakages down to about 3 percent. (Rio de Janiero and Sao Paolo have leakage rates at around 50 percent.)

Moscow (pop. 12 million) stands out for its central heating system that harvests waste heat from electricity generation and uses it to service most of the buildings in the city — a more efficient way to heat a city than having a bunch of smaller systems.

London stands out as the only megacity to reduce electricity consumption as its GDP has grown. The researchers attribute this to a 66 percent increase electricity prices.

All this is to say that megacities are complicated beasts that should learn from one another. This is especially true for cities in developing countries, which have much lower “metabolisms” than their developed world counterparts due to poverty and resource shortages. These cities will surely grow. The question is: Can they get greener as they go?

Unfortunately, Kennedy said, no megacity has a master architect. “You can never start from scratch. You’ve got to work with what you’ve got and adapt and change.”

Kennedy and his colleagues plan to put out a followup paper later this year with specific recommendations for how megacities can do just that. In the mean time — Hey, NYC, you might want to glance up from your climate action plan for a minute. The suburbs are making you look bad in front of all your megacity friends.