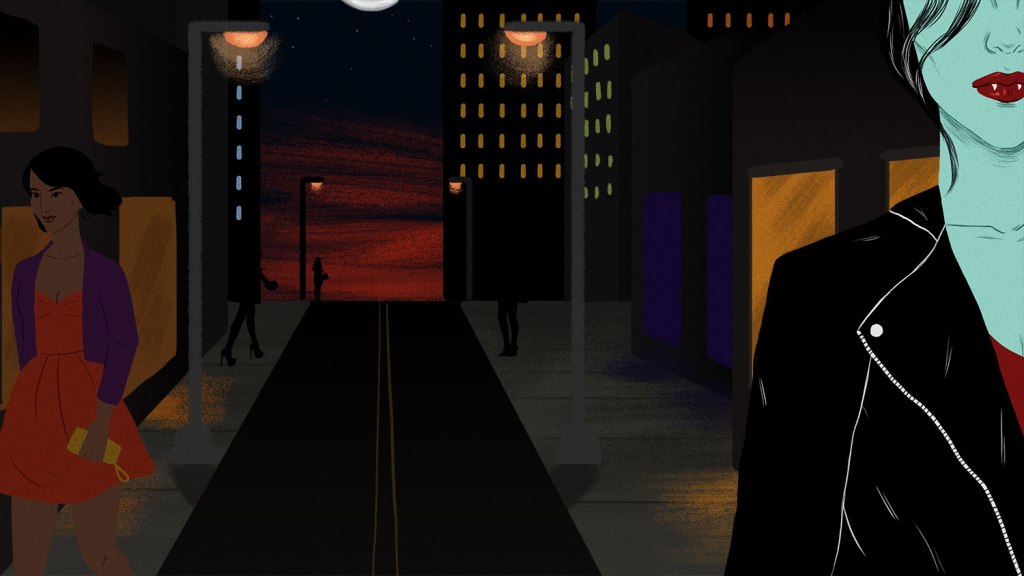 A Girl Walks Home Alone at Night, Ana Lily Amirpour’s debut film, flips the implied vulnerability in its title. Instead of the girl being in danger, she’s a murderous vampire. Sure, there are bad men in Amirpour’s imagined nightscape, but they’re about to be throatless. Her Iranian vampire western is full of shadows, dark humor, and fun. Watch the trailer:

I might not be a terrifyingly beautiful demon, but I do enjoy returning a rude man’s stare until he turns pale and skitters off. (Turns out they can only take about two seconds of their own medicine.) In fact, I’m the opposite of a vampire — when the sun sets in my city, my proverbial fangs disappear and I look for danger at every turn.

I’m not alone. Countless female friends have admitted that when they’re alone at night, strange men become potential attackers. They eye escape routes on dark roads and move away from bushes. We learn bad men lurk around every corner, just waiting for us to let down our guard. There are racist and classist undertones to this fear in a country with a history of white flight and suburbanization. My own rural childhood deepened my unease: Cities in movies and on television are full of dangerous characters and dead women.

But what are actual cities like? Crime rates have been dropping in major cities across the U.S. In New York, that city of Law and Order: Special Victims Unit, the number of violent crimes just hit a new low. In my much smaller city of Seattle, there were 128 reported rapes and 26 murders last year. Considering the majority of rape victims know their attackers, my odds of being attacked on a Seattle street are incredibly low.

I know this, and yet I’m still nervous. Why? A recent episode of Invisibilia delves into the topic of fear. The entire show is worth a listen, but here’s the gist: Our brains are wired respond with fear very easily. For survival, this makes total sense. That crack of a branch in the woods could just be a clumsy squirrel, but you’re going to need to move quickly in the off-chance it’s a salivating saber-toothed cat getting ready to pounce. In the modern world, though, branches are constantly cracking around us in the forms of a scare-happy media and the very real stories of very real women meeting terrible ends.

There’s Shannon Harps, a 31-year-old woman stabbed to death by a stranger on New Year’s Eve 2007, just a few blocks from my apartment. In 2009, a lesbian couple was repeatedly raped and stabbed by a stranger in their Seattle home. And, of course, there’s Mia Zapata. In 1993, Zapata was the frontwoman of Seattle punk band The Gits. The 27-year-old left the Comet Tavern, a bar well-known to Seattle music fans, and walked a street I travel regularly. She was found later that night, beaten, raped, and strangled to death.

Over the years, these stories seep into our own narratives. Add in everyday catcalls, and many women feel sexualized and vulnerable just for walking down the street. I once passed two men on the sidewalk, and for the crime of walking fast, I got to hear them angrily talk about my body in graphic terms. When it gets dark, we remember the way men look at us, and the strangers who hurt women.

My unease with being alone at night was brought home in a very real way recently. I was walking a well-lit road when I saw a dark shape on the sidewalk ahead. As I got closer, the mass shifted into a man. He was passed out in the middle of the entrance to a parking lot. I looked down at the helpless person and brought out my danger checklist. Male? Yes. Stranger? Yep. Drunk? Possibly. I looked up at the traffic and realized how vulnerable the danger on the sidewalk was. I paced back and forth, ready to jump in front of a car if one tried to turn in, but too paralyzed to wake the stranger. As I weighed being a good person against being a safe woman, a car slammed on its brakes on the street. The woman held up her hands in a gesture that snapped me back to reality.

I turned to the man and at that moment, a young couple walked up. We woke the man and got him to his feet. He told us he was dying of hepatitis. We helped him sit down against a building. He said he was very sad. Turns out, he was also very sweet. The male half of the couple asked the sad, sweet man if he needed an ambulance, and he said he did. We waited for the paramedics and left when they arrived.

The great cities writer Jane Jacobs introduced the idea of eyes on the street: The safest neighborhoods are places where neighbors are out and about and looking out for each other. But what happens when half of the population gets scared into only looking out for themselves?

There are always risks when it comes to getting from one place to the next. Not only am I much more likely to die in a car crash than strolling alone at night, but walking is better for my body, soul, and planet. Still, our collective anxiety about simply walking plays out in very real ways: We’ve even criminalized parents who let their kids walk home alone.

Being so fearful accomplishes nothing. Take for example those dumb lists about how to avoid being raped. Women are never going to stop wearing their hair in ponytails just to avoid giving a statistically unlikely attacker a handhold. Plus, even if we followed those suggestions and avoided violence, wouldn’t that mean the next ponytail-wearing woman jogging at night would get attacked anyway?

This sort of fear-mongering doesn’t get at the problem in a systemic way, and it feeds into the image of the city as a shadowy, dangerous place for women. That, in turn, discourages women from walking alone at night.

We could debate how to make it safer for women to walk at night — more lights, self defense classes, the undead developing a hankering for bad men. Those things are all worthwhile, but they don’t get to the point: I’m fed up with this planet spinning with danger and fear.

So, take this: A girl walks home alone at night and isn’t raped or murdered, and doesn’t even turn into a vampire. It’s hardly a story, but it happens every night. How do we make her feel safer? Join her. Step away from the internet and TV for a bit. See your city and neighbors in a more realistic light.

As Alix Spiegel puts it on Invisibilia, “If you have a lot of fear, fewer bad things are likely to happen, but it’s very probable that your life is more painful to you. So is it better to be fearful or fearless? Which side of the continuum do you choose?”

I know where I’m at. And if you see me out and about, know that I have your back. Together, we can hold our heads a little higher. Then, when the dark shapes on the sidewalk shift into vulnerable men, we’ll know what to do.