India and U.S. agree on some energy deals — but no emission cuts 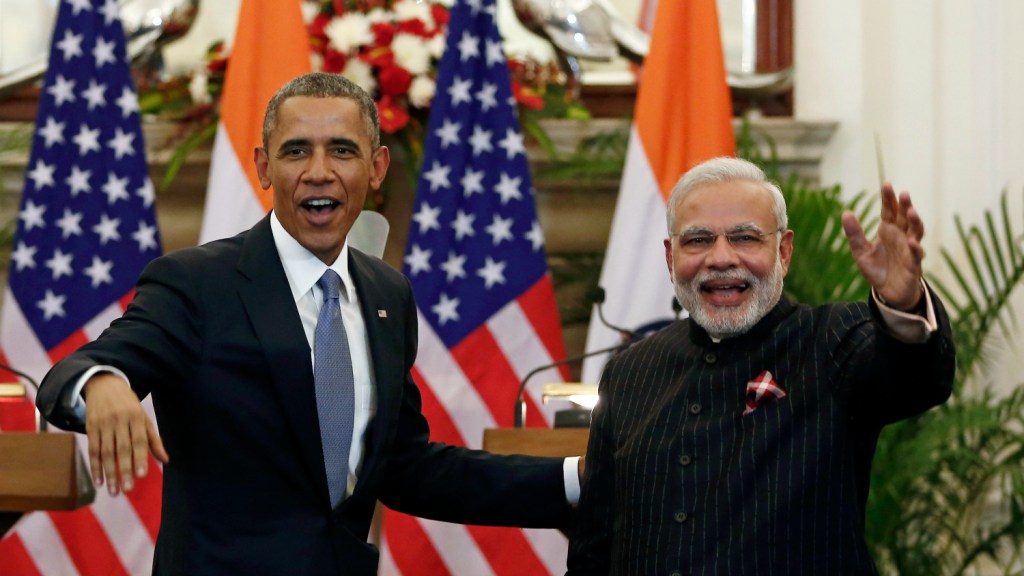 India and U.S. agree on some energy deals — but no emission cuts

NEW DELHI, India — On Sunday, the first day of Obama’s visit to India, the president and Prime Minister Narendra Modi made a number of announcements pertaining to the environment. But none were the big one that greens were hoping for: Some indication from India that bringing electricity to its hundreds of millions of poor and reducing greenhouse gas emissions are not mutually exclusive goals.

The two leaders came to an agreement that would make it much easier for U.S. companies to help build nuclear reactors in India, paving the way for India to increase its reliance on a form of power that does not significantly contribute to climate change, but has long proved divisive among environmentalists debating the best way to cleanly electrify the developing world. The U.S. also agreed to help out, financially and technologically, with India’s ambitious plans to expand solar energy. And the two nations agreed to work together on a plan to phase out the use of hydrofluorocarbons, refrigerants that contribute to climate change. (Greens have called for developing nations to skip using them altogether and move right to cleaner refrigerants.) Obama and Modi also said they would continue to be in touch about climate-related issues in the run-up to the U.N. climate conference in Paris at the end of the year.

But the announcements didn’t directly address what, in a statement, Greenpeace India called the “elephant in the room” — India’s increasing reliance on coal. “Any announcement on India’s climate action needs to address future coal expansion to make the cut. The bulk of our CO2 emissions come from burning coal for electricity and this number will rise exponentially if India goes ahead with business as usual,” said Vinuta Gopal, the group’s climate and energy manager. “We know we can’t end all coal burning this year or even this decade, but the majority of new energy generation in India should come from clean power sources and efficient use of energy.”

After the U.S.-China climate pact was announced in November, anticipation built up that India, the world’s third largest greenhouse-gas emitter, would feel pressure to follow suit and set a peaking year for emissions. India has long maintained that, as a developing country where 300 million lack access to electricity, it cannot afford to forego any method of bringing power to its poor. Both coal and solar figure prominently in its development plans. The country has insisted that the burden for confronting climate change sits squarely on the shoulders of those who historically have done the most to contribute to it — like the U.S., the E.U., and, increasingly, China.

The initial optimism for some sort of emission-reduction deal had been dampened in the weeks leading up to Obama’s visit, when both the Modi administration and environmental experts within India indicated that the government really wasn’t interested in complicating its development strategy with greenhouse gas goals — at least, not until the other major polluters ramped up their own commitments.

“If you consider what the IPCC and various agencies have been suggesting … that is, not exceed temperature beyond 2 degrees Celsius above preindustrial levels, then we are left a global carbon budget that we all have to spend,” said Arunabha Ghosh, CEO of the New Delhi-based think tank Council on Energy, Environment and Water, on a call with reporters ahead of Obama’s arrival. “If you look at the commitments that have currently come forward from Europe, the U.S. and particularly from China, actually there’s not that much left for the rest of the world, which includes India.”

Though some international media outlets see an indication in Sunday’s developments that Modi’s “government is moving toward joining an international deal on global warming,” as Bloomberg puts it, Indian media frame things differently, as the country walking its own path in the face of international pressure. Still, Indian outlets note, these agreements may pave the way for greater cooperation between the two countries in the future. Modi publicly asked Obama to “lead international efforts in making renewable energy accessible and affordable” for countries like India.

And that’s important. India’s rapid development is taking a steep environmental toll on its air and water quality, and American investment and technology could be a significant factor in solving those problems, as well as climate change, which will hit the country hard.

At the same time, international pressure is mounting for India to do more. The U.N. agreement reached in Lima at the end of last year asks nations to announce emissions targets by spring of this year, to pave the way for a deal in Paris. India, during negotiations in Lima, resisted the idea of a deadline for capping its emissions. But the more time Modi and Obama spend exchanging ideas (and bear hugs), the more Modi might be persuaded to step up India’s ambitions on climate change. Media in both the U.S. and India are characterizing their warm relationship as a “bromance.”

“India’s voice is very important on this issue,” Obama said at a joint press conference with Modi. “Perhaps no country could potentially be more affected by the impacts of climate change and no country is going to be more important in moving forward a strong agreement than India.”