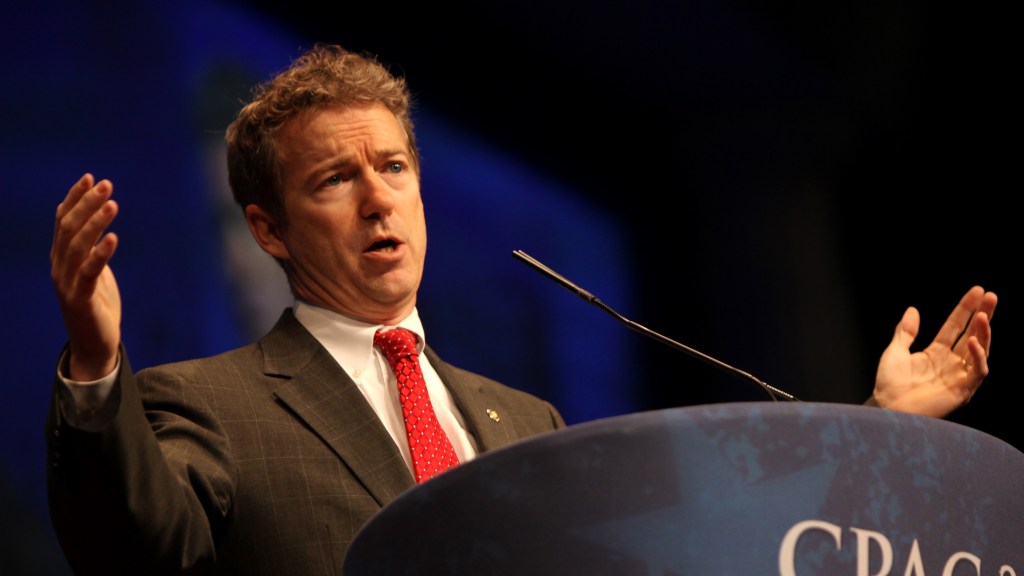 Rand Paul, the beacon of small-government conservatism, has an idea to save Detroit. Paul’s solution to Detroit’s poverty, shrinking population, crime, blight, and bankruptcy is the same as Paul’s solution to virtually everything else: cut taxes. Michigan news website MLive reports:

Sen. Rand Paul (R-Ky.) plans to introduce a bill in Congress to create “Economic Freedom Zones” that would reduce taxes and ease government regulation in distressed areas, he announced in a speech in Detroit on Friday.

Paul said the measure would “leave over $1.3 billion in Detroit” over 10 years by slashing personal and business income tax to 5 percent, eliminating capital gains taxes and offering other incentives for people and businesses to move to designated zones that are in economic distress.

Unlike some of Paul’s ideas, it’s not completely wacky. Getting people to move to Detroit and start businesses must be one component of any plan to restore it to health. But there is a voodoo-economics quality to Paul’s proposal, similar to supply-side theories: If you tax something less, you will get more of it. With supply side, also known as trickle-down economics or Reaganomics, the idea is that if the federal government taxes income or investment less, the economy will grow more. The data and historical experience do not actually support that, unless you’re cutting taxes from an extremely high rate, like 90 percent, to a more optimal one. There is no evidence that a tax rate of, say, 25 percent versus 15 percent determines macroeconomic outcomes.

The urban corollary to Reaganomics was Enterprise Zones, touted by former Rep. Jack Kemp (R-N.Y.), a dedicated supply-sider who served as secretary of housing and urban development under the first President Bush. Paul is essentially proposing an Enterprise Zone for Detroit.

It would be a little too strong to call Enterprise Zones discredited in the manner that supply-side economics is, but academic and governmental researchers have found the results to be mixed at best. Studies that found Enterprise Zones led to growth typically failed to take into account larger economic trends. If you create an Enterprise Zone right before an economic boom, the city in question may see growth, but not because of the tax breaks the zone brings. A 1989 study, published in the Journal of the American Planning Association, attempted to disaggregate the effect of the zones by comparing cities with Enterprise Zones to the rest of their metro regions. It found, “There is little evidence demonstrating that this concept is effective at generating new economic development at the local level.” A 2001 paper in Economic Development Quarterly found that Louisville, Ky.’s Enterprise Zone program mostly benefited large corporations and not the struggling neighborhoods themselves.

In recent years, California has spent billions of dollars on Enterprise Zones. The California Budget Project, a nonpartisan fiscal policy analysis organization, found that the vast majority of the tax breaks given out within the zones are claimed by very large corporations, and that “the state’s EZ Program fails to generate job growth or promote business development.” A startup, for example, won’t be enticed by a corporate income-tax holiday when it has yet to start generating much income.

Anyway, tax breaks are no substitute for investment, which is much of what Detroit needs. And the idea that economic or population growth will solve all of its problems is silly; some of its problems require hands-on governmental solutions.

The car companies took Detroit’s trolleys out of service and rebuilt the city as a mecca for the automobile. The city sprawled. When the car companies fled and took their employees with them, it was left with a lot of empty lots. What Detroit needs now is a vision for densification and reuse of its vacant properties. There are thousands of abandoned houses, falling apart, attracting vermin and overgrown with weeds. Tearing them down, and refurbishing and reusing the lots, costs money. No tax break for businesses or individuals will solve that. It’s a public problem requiring a public solution.

Detroit also needs to embrace density. The city’s footprint over 138 square miles might have made more sense for a population of 2 million. Now that it’s down to about 700,000 people, city services must cover twice the area of Washington, D.C., with only one-sixth more residents paying taxes to support it. This is economically and environmentally inefficient. It is also out of step with America’s urban social trends.

It’s no coincidence that Detroit’s few bright spots, where artists and young professionals have moved in, are downtown and midtown. Nor is it a coincidence that Americans are driving less while biking and taking public transit more. The regions with the strongest economies are also often those where driving is most rapidly declining, such as New York, Washington, D.C., and Austin, Texas.

If you’re going to take revenue out of the federal treasury to aid Detroit, it would be better spent on a program to tear down abandoned houses, convert the lots into farms or community gardens, and subsidize the construction of mass transit systems and dense clusters of housing near transit corridors.

Detroit’s problems also need to be understood in the context of American policy towards cities and suburbs more generally. We currently push private investment in the wrong direction: out toward the farthest exurbs. The home mortgage interest deduction, federal transportation spending that favors new highways, federal backing for the cost of buying a new home but not renovating an old one: all conspire to favor suburban sprawl. They also encourage investment in real estate instead of more economically productive purposes such as manufacturing.

Lack of regional economic vitality is not Detroit’s main problem. The Detroit suburbs in Oakland County, Mich., are growing in wealth and population. Disinvestment in the urban core and policies that favor inefficient suburban development have sucked the life out of the city.

Tax credits are more politically palatable to Republicans than spending money on urban rehabilitation through HUD, the Department of Transportation, or the EPA’s brownfields program. But Detroit doesn’t need to be treated as a lab experiment for conservative ideology. The city needs direct investment.