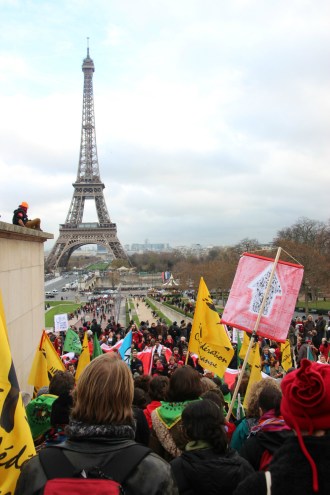 PARIS, France — While U.N. negotiations dragged on at the official conference site in the suburb of Le Bourget, thousands of activists came out in force in downtown Paris on Saturday afternoon. Their message: The deal being finalized wasn’t even close to strong enough.

Climate activists have faced big obstacles as they’ve tried to stage rallies and marches in Paris over the past two weeks. The terrorist attacks in the city last month spurred the French government to impose a state of emergency and ban public demonstrations. Originally, environmental groups had planned to hold big events, including a huge march, on the weekend before COP21, to put pressure on leaders to come up with a strong deal. But those plans had to be cancelled and replaced by more quiet, stationary events: a human chain and a shoe display that were held on Sunday, Nov. 29.

Others were moved indoors. Friends of the Earth International had planned an event called “People, Power, Action” that would bring together some 2,000 of its employees, members, and volunteers from all over the world at the iconic Place de la Republique in Paris. Instead, the event was relegated to a conference center in the suburbs, where it attracted virtually no media attention.

A coalition of green groups — mostly French ones such as Attac and Confédération Paysanne — had planned acts of civil disobedience for Saturday, to mark the end of the conference. They intended to surround the COP21 site in Le Bourget. But they abandoned those plans.

Still, activists were adamant that they have the last word after the conference ended. It had been clear for months that however strong the deal turned out to be, it wouldn’t be strong enough. They wanted to make the point in public that more action is still needed, and if those demonstrations were illegal, many people were planning to risk arrest to take part anyway.

In the end, police granted permission for two big actions that groups were planning to hold on Saturday afternoon, and no arrests were made. But as late as Friday night, activists intending to participate didn’t know that would be the case. 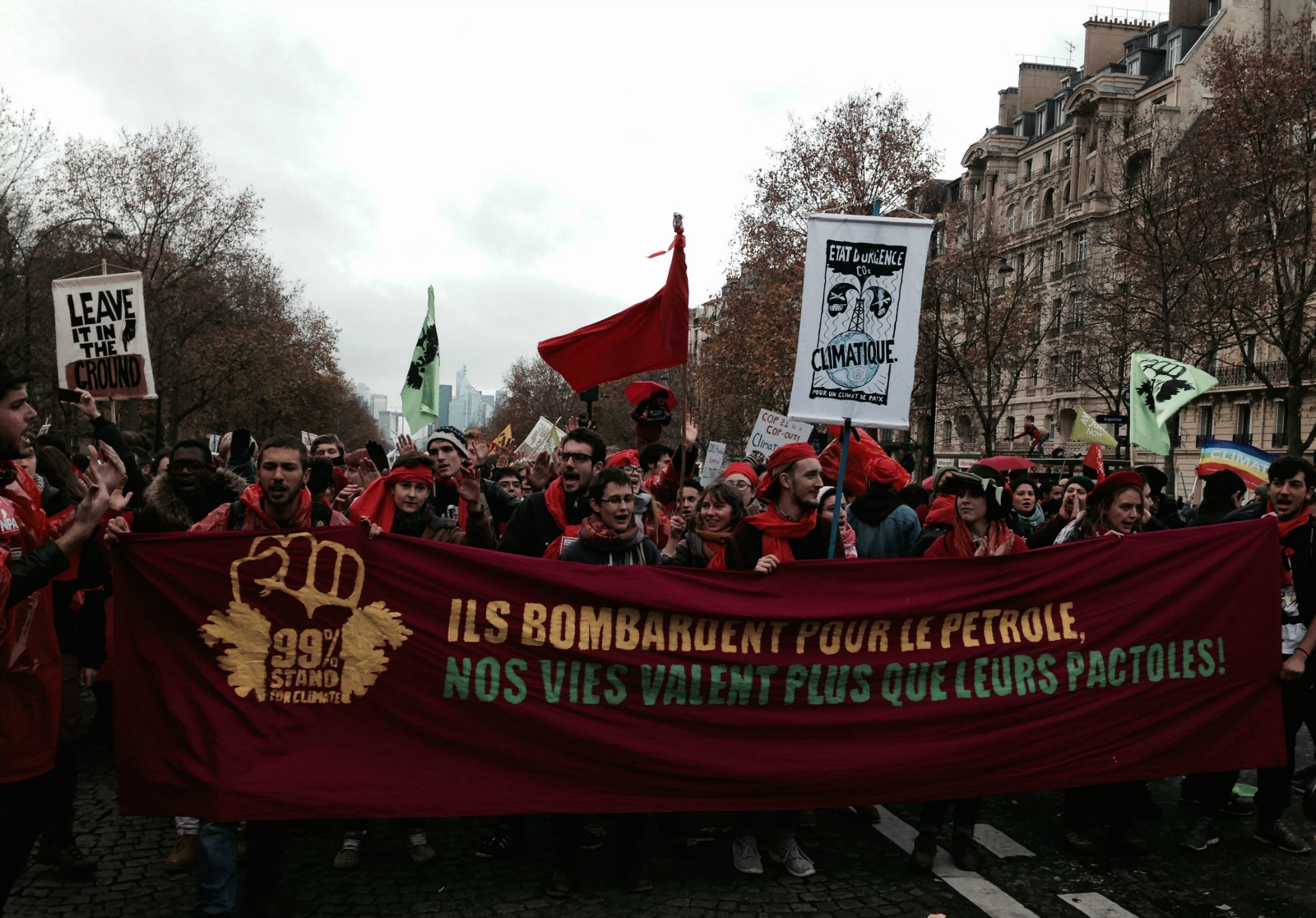 People came in droves from all over Europe to take part in Saturday’s final actions. Hundreds of them attended briefings held by organizers on Friday in the “Climate Action Zone,” a building temporarily dedicated to the cause, located in an unusually unattractive northeastern quarter of Paris. They were instructed to find a space to sit on the floor for the next hour, which might have been problematic were they not almost all under 30 years old. 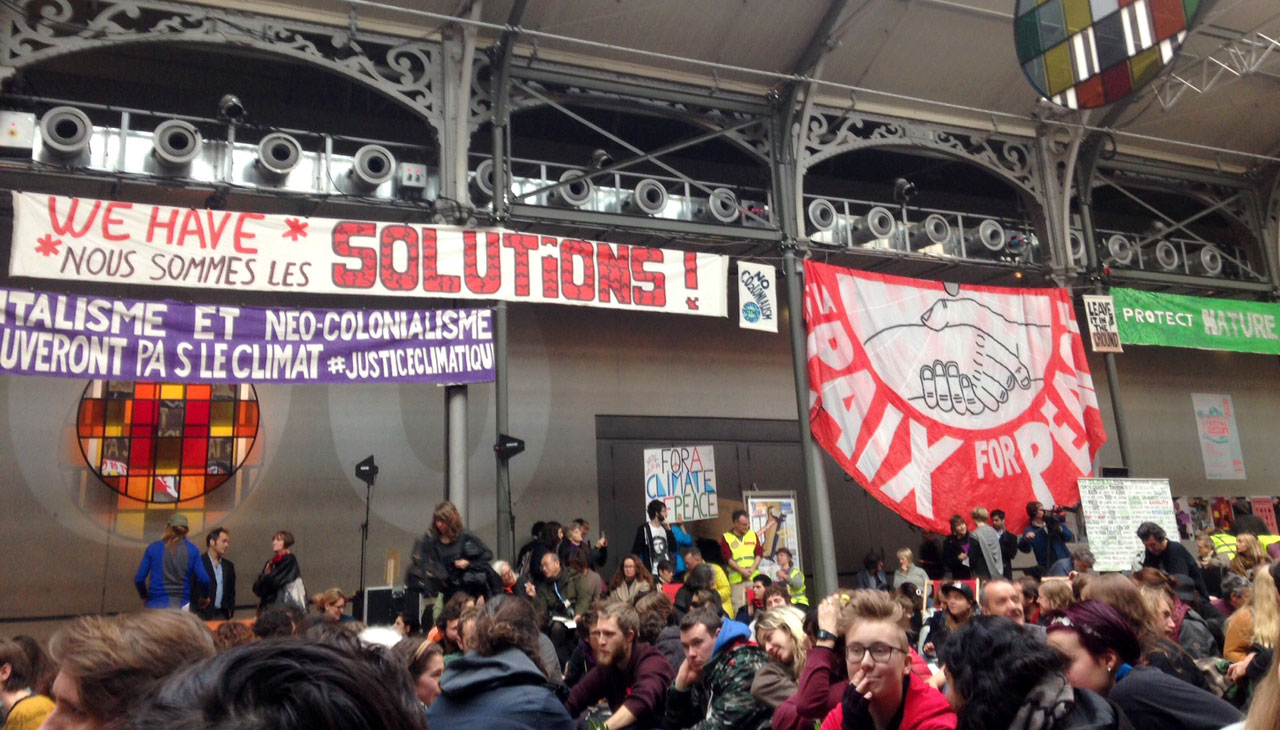 From Norway, for example, there was a youth delegation with several dozen each from the Youth Socialist League, Red Youth (part of the communist party), and the Young Friends of the Earth. They had endured a 30-hour bus ride from Oslo. “Is the bus cheaper than flying?” I asked. No, they laughed, it is much cheaper to fly, but more polluting. They stuck to their principles.

Lots of people had stories of long, low-carbon journeys to Paris. There were 130 people who took five days to bike over from London (and take a ferry ride across the English Channel). “I’ve been to marches [for the climate] before, but never anything this big,” said James Clark, a lanky, shaggy member of the London bike contingent, on Friday night. “I don’t think we’re expecting a lot from the agreement, but we’re hoping for people, and people in [the negotiations], to wake up.”

At a collective art space outside Paris, foreign visitors and Parisians alike were gathered on Friday to paint banners and posters with messages like “Justice for Impacted People.” 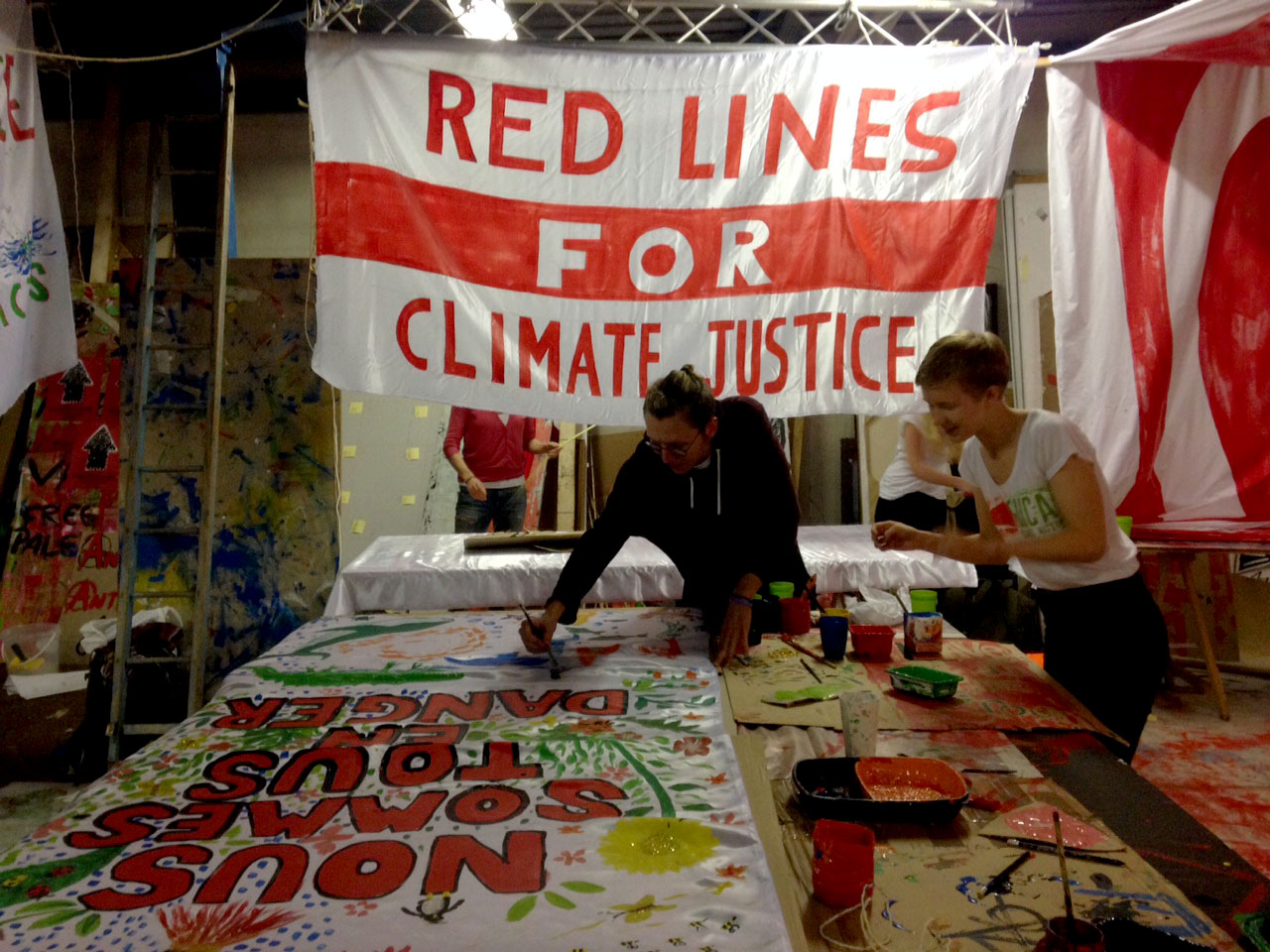 “Personally, I think this is ugly, but if someone wants to bring it, they can,” said Clementine, a late-middle-aged French woman who refused to give her last name, about the poster she was painting. She has attended protests throughout the COP21, but was otherwise new to climate activism. “I have grandchildren and I’m very ashamed of the state of the Earth I’m leaving them,” she said. She also — half-jokingly, I think — said she believes in reincarnation so it’s in her own interest to preserve the planet. “I didn’t do anything before because I had kids in my home and things to do,” Clementine said. “For the first time, I feel a real urgency.”

While the groups organizing the protests are careful to praise the progress made in the agreement before complaining about its shortcomings, the grassroots participants often voice total disillusionment with the U.N. negotiation process. A common complaint — typical of the radical left around any issue — was that COP21 was dishonestly presented as a solution to pacify the masses, when it is really just another part of the problem. John Jordan, a British organic farmer who lives in France and volunteers as an activist with Climate Justice Action and Climate Games, called COP21 a “joke” and a “genocidal agreement.”

Clementine was skeptical too. “I would ask that they call a dog a dog, not saying you have a 1.5 degree target and no way to do it,” she said. Other complaints that activists shared with Grist included the absence of any provision to keep fossil fuels in the ground, and the lack of any reparations paid to poor countries by rich countries that have caused the bulk of the climate problem.

On Saturday between 11 a.m. and noon, thousands of people — 350.org, one of the organizing groups, claims 10,000 — started lining up along the Avenue de la Grande Armée between the Arc de Triomphe and Porte Maillot, a classic Parisian boulevard. They were hemmed in by police barricades, which were manned by officers in riot gear with rifles, and they were steered through specific street entrances where their bags could be checked, but otherwise the police left participants alone along the route itself and let them move freely from street to sidewalk.

Many protesters wore red or carried red umbrellas to call attention to the “red lines” for the climate that the world must not cross. There was a clown army that marched in with red noses and colorful wigs. A group of women from Australia were dressed as angels because, one of their members explained, “We’re guardians of the climate.” Drumming was provided by an international network of politically active samba bands called Rhythms of Resistance (ROR, pronounced “roar”). 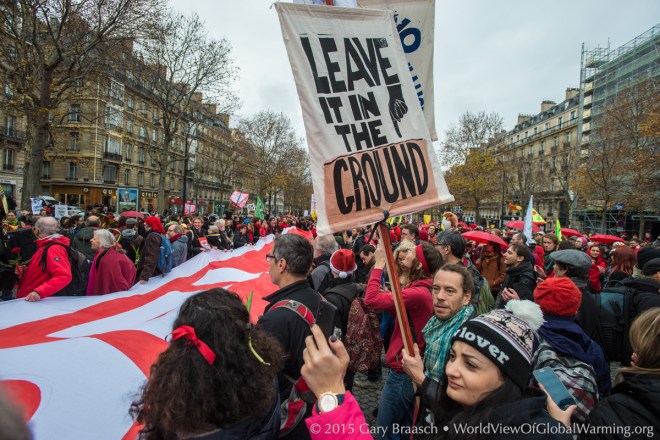 At noon, bullhorns sounded, and then two minutes of silence was observed. Though this nodded at the victims of the recent Paris terrorist attacks, the primary purpose was to honor those who have died from climate change-related extreme weather events and those who will die from them in the future. It was suddenly, almost shockingly, silent, except for the police helicopter circling overhead. In its own way, it created as moving a moment as any speech on climate change ever has. Then the party picked up again, with chants of “What do we want? Climate Justice! When do we want it? Now!”

About half an hour later, activists laid down long strips of red cloth they had been carrying during the protest. People then lined them with the red flowers and lit the occasional red candle, illustrating the activists’ commitment to holding their red lines in the years ahead. 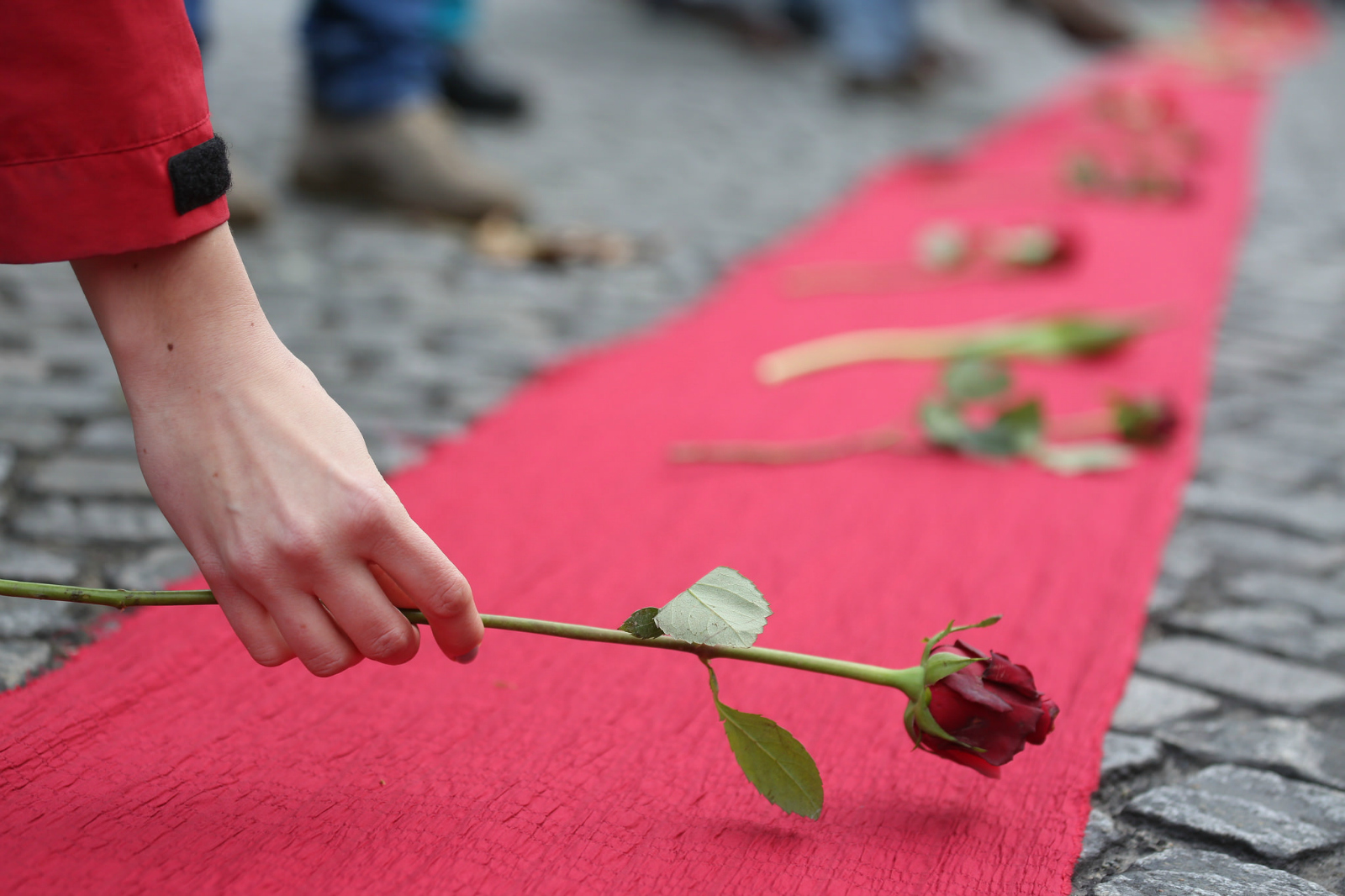 The “red lines” protest was followed at 2:00 p.m. by a rally sponsored by Friends of the Earth International in a park next to the Eiffel Tower, just over a mile away. Many participants marched together from the first event to the second. Then, with that other iconic Parisian landmark in the background, they formed a giant human chain with banners and posters calling for everything from 100 percent renewable energy to “a climate of peace.” They chanted, mostly in French, though often repeating the English-language call for “climate justice now” that had been heard across town earlier in the afternoon. 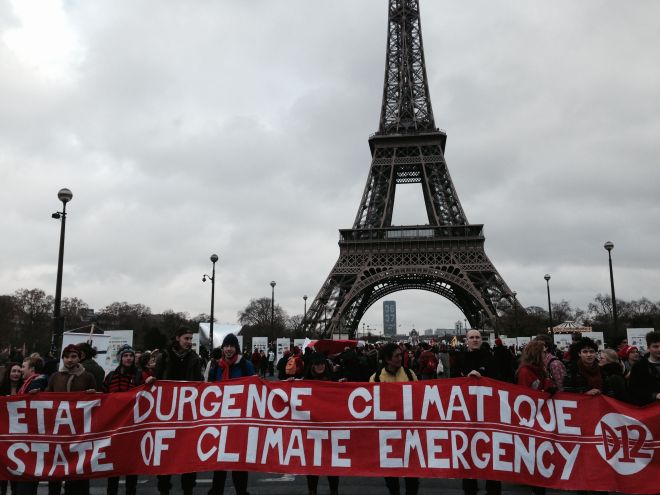 Despite the limitations put on them, the climate activists got their message across on Saturday: They will not be satisfied with the terms of the Paris agreement, and they will keep fighting for stronger actions to combat climate change and bring about climate justice.