Though all oils are dirty, some are dirtier than others. High-profile case in point: the Canadian tar sands. The fact that tar-sands oil is one of the filthiest oils in the world has helped fuel the debate around the Keystone XL pipeline.

The good folks at the Carnegie Endowment for International Peace thought someone had better analyze which oils were a bad idea to extract, and which oils were a really, really, really bad idea to extract. CEIP teamed up with Stanford and the University of Calgary to develop an oil-climate index; the result of their work is documented in a new report titled “Know Your Oil.”

The team found that there’s at least an 80 percent difference in greenhouse gas emissions per barrel between the worst oil researchers looked at and the least worse. The worst, by the way, is Suncor Synthetic H — unsurprisingly, a type of tar-sands crude from Alberta. The least damaging oil they looked at is from the Tengiz field in Kazakhstan. 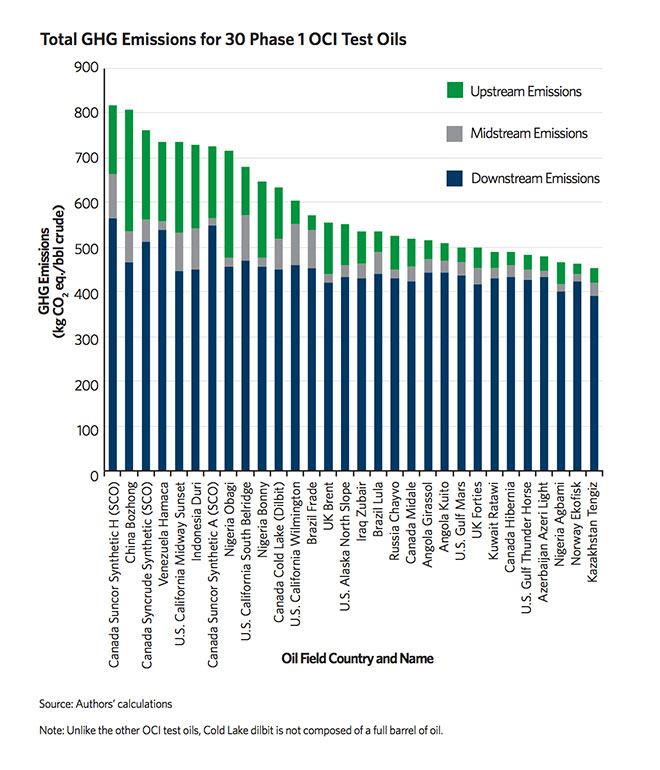 One particularly carbon-intensive crude comes from California’s Midway Sunset oil field. (“Yes, some of the worst oil for the climate is pumped out of one of America’s greenest states,” Brian Merchant points out at Motherboard. In fact, it’s the top-producing field in the state. Ha! Irony!) This oil needs to be softened with steam before it can be extracted, and the water to make that steam is heated using huge quantities of natural gas. The oil, once flowing, is heavy and waterlogged, and takes an unusual amount of energy to be lifted out of the ground. And after that, it’s complex to refine. “The combination of energy used in extraction and refining means almost half of Midway Sunset’s total greenhouse gas emissions are released before the resource even gets to market,” says the report.

Examples like the Canadian tar sands and California’s Midway Sunset field underscore one of the report’s main points: “The fate of the entire oil barrel is critical to understanding and designing policies that reduce a crude oil’s climate impacts.” When thinking about these oils, it’s not just the oil itself that threatens the environment. It’s the whole process of getting it out of the ground, getting it to a refinery, refining it, and getting it to consumers — all of that spews carbon into the air, contributing significantly to oil’s role in fueling climate change.

Years ago, that wasn’t so much the case. We only dealt with a few types of oil, and they were relatively easy to get at and refine. But now, companies are finding new, energy-intensive ways to get at oil wherever it may be — trapped in shale, mixed with sand or water, sitting in pools deep below the ocean or sheets of ice in the Arctic, or even several miles underground. Rather than cutting off our addiction, we’re researching new ways to squeeze every last drop out of the earth — even as the evidence piles up that the addiction is ultimately fatal.

Exclusive: Let The Black Lillies brighten up your week