Carbon dioxide has been steadily rising since the start of the Industrial Revolution, setting a new high year after year. There’s a notable new entry to the record books. The last station on Earth without a 400 parts per million (ppm) reading has reached it. 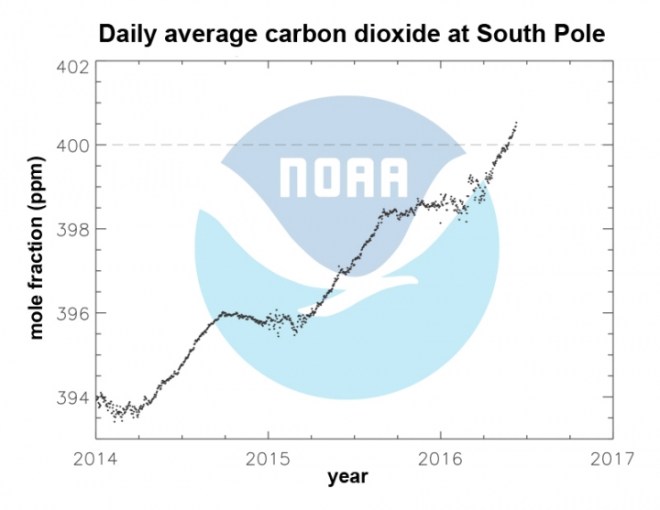 Carbon dioxide officially crossed the 400 ppm threshold on May 23 at the South Pole Observatory. NOAA

A little 400 ppm history. Three years ago, the world’s gold standard carbon dioxide observatory passed the symbolic threshold of 400 ppm. Other observing stations have steadily reached that threshold as carbon dioxide has spread across the planet’s atmosphere at various points since then. Collectively, the world passed the threshold for a month last year.

In the remote reaches of Antarctica, the South Pole Observatory carbon dioxide observing station cleared 400 ppm on May 23, according to an announcement from the National Oceanic and Atmospheric Administration on Wednesday. That’s the first time it’s passed that level in 4 million years (no, that’s not a typo).

But the most remote continent on earth has caught up with its more populated counterparts.

“The increase of carbon dioxide is everywhere, even as far away as you can get from civilization,” Pieter Tans, a carbon-monitoring scientist at the Environmental Science Research Laboratory, said. “If you emit carbon dioxide in New York, some fraction of it will be in the South Pole next year.”

Tans said it’s “practically impossible” for the South Pole Observatory to see readings dip below 400 ppm because the Antarctic lacks a strong carbon dioxide up and down seasonal cycle compared to locations in the mid-latitudes. Even factoring in that seasonal cycle, new research published earlier this week shows that the planet as a whole has likely crossed the 400 ppm threshold permanently (at least in our lifetimes).

Passing the 400 ppm milestone in is a symbolic but nonetheless important reminder that human activities continue to reshape our planet in profound ways. We’ve seen sea levels rise about a foot in the past 120 years and temperatures go up about 1.8 degrees F (1 degrees C) globally. Arctic sea ice has dwindled 13.4 percent per decade since the 1970s, extreme heat has become more common and oceans are headed for their most acidic levels in millions of years. Recently, heat has cooked corals and global warming has contributed in various ways to extreme events around the world.

The Paris Agreement is a good starting point to slow carbon dioxide emissions, but the world will have to have a full about-face to avoid some of the worst impacts of climate change. Even slowing down emissions still means we’re dumping record-high amounts of carbon dioxide into the atmosphere each year.

That’s why monitoring carbon dioxide at Mauna Loa, the South Pole, and other locations around the world continues to be an important activity. It can gauge how successful the efforts under the Paris Agreement (and other agreements) have been and if the world is meeting its goals.

“Just because we have an agreement doesn’t mean the problem [of climate change] is solved,” Tans said.