Bees' tongues are getting shorter because climate change 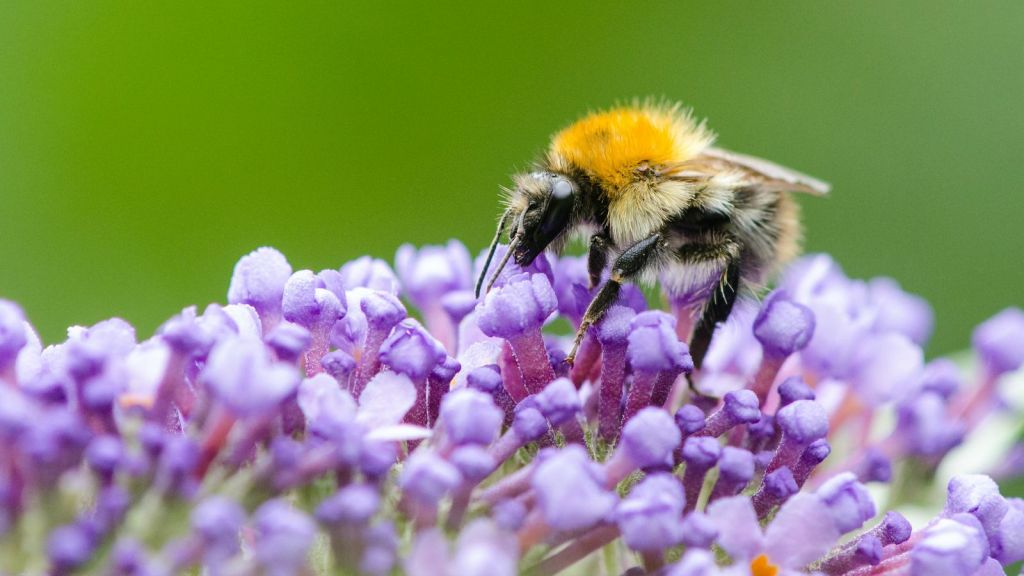 Bees’ tongues are getting shorter because climate change

If you think about iconic symbols of climate change, you’ll probably picture a polar bear, emaciated, and clinging to a precariously small chunk of ice. You’re probably not thinking of a bumblebee, flitting about an alpine meadow with a shorter-than-average tongue. And yet, according to new research from Nicole Miller-Struttmann from SUNY College at Old Westbury, these shrinking tongues speak volumes about how nature’s most intimate partnerships might change in a warming world.

In the central Rockies, there are many species of bumblebee, and some have unusually long tongues for their body size. These are adaptations to the deep tubes of certain flowers like Parry’s clover and alpine skypilot, allowing the bees to lap at nectar that smaller-tongued species can’t reach. The tubes, in turn, are adaptations to the long bee tongues, providing exclusive access to nectar in exchange for exclusive pollination services. Both partners are locked in a co-evolutionary dance, held together by beautifully fitting tongues and tubes.

Recently, all has not been right with this dance. Miller-Struttmann’s colleagues, who have been studying the local bees and flowers for decades, started to notice weird changes. Long-tongued bees, which have been declining in many parts of the world, had become relatively rarer in the Rockies, too. Meanwhile, foreign species from farther down the mountainsides were encroaching on their terrain.

To work out what was going on, the team measured the tongues of the two most common bumblebee species, caught at three Colorado mountains in recent years. They then compared these lengths to those of specimens collected from the same mountains between 1966 and 1980.

These archived bees (has-bee-ns?) revealed that the tongues of these species have become 0.61 percent shorter every year, and are now just three-quarters of their former glory. “We were really surprised at the strength of the result,” says Miller-Struttmann. “We obviously asked the question but we weren’t expecting such a large response, especially over just 40 to 50 years.”

Why have the long-tongued bees evolved into long-ish-tongued bees? The team ruled out several possibilities. The bees weren’t becoming smaller overall, at least not to a degree that explained their shrinking tongues. Shorter-tubed plants hadn’t taken over the mountainsides; herbarium collections revealed that they are no more common now than they were in the 1960s. And immigrant bees from elsewhere in the mountains weren’t ousting the locals from their usual long-tubed flowers.

The best remaining explanation is that the changing climate of the Rockies has shifted the balance of flowers than the bees depend upon. Jennifer Geib from Appalachian State University, who was involved in the study, says, “Our field sites are part of what ecologists describe as high-altitude desert.” That is: they’re really dry. And they’ve become drier in the last 60 years, as summers have become 2 degrees C warmer.

Water evaporated more quickly from the soil. Winter snowfalls started thawing out earlier, depriving plants of precious meltwater during the growing season. Many wildflowers that were already eking out a living on the brink of drought were pushed over the edge. On Pennsylvania Mountain alone, the team calculated that “millions of flowers were lost.” As such, today’s bees face about 60 percent less food than their predecessors from the 1970s.

The long-tubed flowers weren’t especially affected, but there were fewer of them — and not enough for long-tongued specialists to subsist on. So the long-tongued bees were forced to broaden their diets, drinking nectar from flowers of every length. Since they were now competing for resources that many other species could plunder, their long tongues no longer conferred any special advantages. So evolution, ever-thrifty and economical, selected for individuals with shorter tongues.

“That’s a really neat discovery,” says Jeremy Kerr from the University of Ottawa, who also studies pollinators. “I haven’t seen other research that suggests we’re likely to see rapid evolution in bumblebee [traits] because of climate change.” Kerr’s own research shows that North American and European bumblebees are being crushed out of their normal ranges by warming climates, seemingly unable to expand into more suitable pastures.

Miller-Struttmann’s study suggests that bees might be able to persist within these contracting habitats by changing their foraging habits and evolving accordingly. How they fare in the long term is anyone’s guess. Certainly, the widespread decline of long-tongued bees, and bumblebees more generally, is a poor portent.

This isn’t the only mutualism at risk in a warming world. In warmer oceans, corals eject the algae that they depend on for photosynthesis, depriving them of both the energy they need to construct their mighty reefs, and the source of their color. Starving and alone, they become weak and ghostly versions of themselves.

Meanwhile, carpenter ants, a hugely successful group with around 1,000 species, depend on bacteria inside their cells to supplement their diets with important nutrients. These microbes are also sensitive to temperature, and it’s possible that a warmer world would crush these ants — and the many other insects that depend on supplementary microbes — into ever narrower niches.

And what of the long-tubed flowers, now decoupled from their partners in pollination? “Alpine plants are very long-lived, so any effects of reduced pollination efficiency from the recent past would likely not be seen in their populations for some time,” says Geib. “But if climate-change models are accurate, these plants are likely to face a multitude of synergistic pressures in the future, including drought, and increased competition as the ranges of lowland species shift upward. The combination of these pressures, coupled with decreased pollination, could forecast a troubled future.”