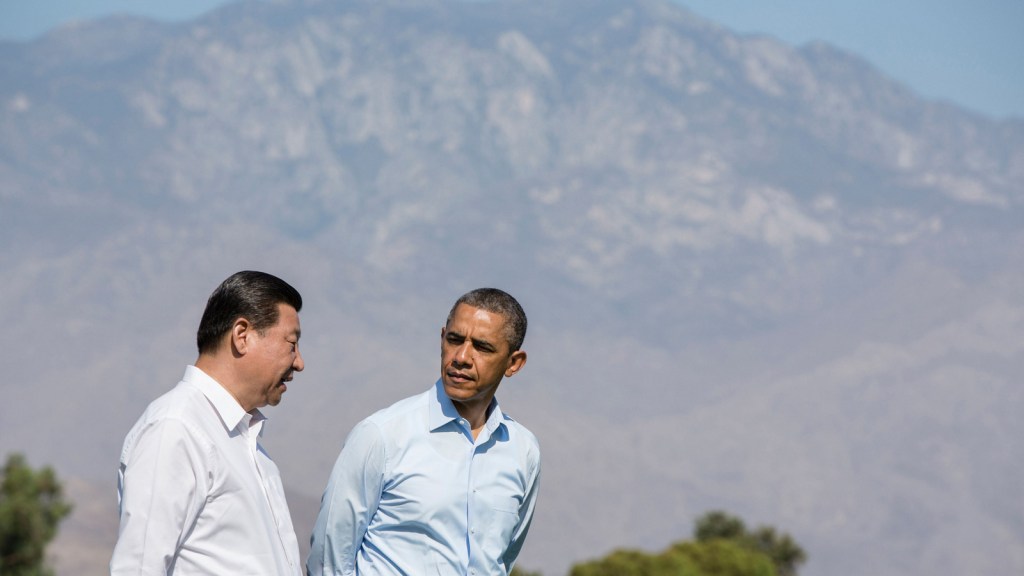 The U.S. and China are in friction over plenty of topics — cyber attacks, military jostling in the South China Sea, a recent currency devaluation — but they’ve found significant common ground on at least one issue. Chinese President Xi Jinping’s first state visit to the U.S. resulted on Friday in a new joint presidential statement on climate change. It outlines China’s plans for a nationwide cap-and-trade scheme for 2017, a new $3.1 billion commitment from China to climate finance for poorer nations, and a common U.S.-China vision for December’s U.N. negotiations in Paris.

Last November, when Presidents Obama and Xi met in Beijing, the leaders announced a similar agreement in which they pledged joint climate action in the form of emissions reduction targets (for the U.S.) and peak emissions dates (for China). Friday’s statement shores up November’s agreement by outlining how the countries actually intend on meeting those goals. That is, as opposed to offering new emissions targets, the statement illustrates the bilateral efforts and domestic policies that make the previous pledges credible. Which is actually exceedingly worthwhile: If there’s anything the climate negotiations game severely needs, it’s credibility.

The leaders hope that by solidifying their respective climate efforts, they will help spur action in the upcoming Paris negotiations, said White House officials on a press call on Thursday — in the same manner the countries’ November bilateral statement spurred progress at last year’s big U.N. climate conference in Lima. The new statement also builds on announcements made earlier this month at the Climate Leaders Summit in Los Angeles, where Chinese and American cities, states, and companies touted their climate-friendly initiatives. Heavy emitters Beijing and Guangzhou, for example, will seek to peak their emissions by 2020 as opposed to the Chinese national goal of 2030.

Other announcements in the new joint presidential statement include China’s commitment to “green power dispatch,” a suite of electricity sector initiatives that will give distribution priority “to renewable power generation and fossil fuel power generation of higher efficiency and lower emission levels.” The statement also reaffirms the U.S. commitment of $3 billion to the Green Climate Fund, a central United Nations financial mechanism for financing mitigation and adaptation efforts in developing countries. The Green Climate Fund seeks to mobilize $100 billion annually by 2020.

For its part, China’s new financial contribution will go toward setting up the China South-South Climate Cooperation Fund, a new mechanism that seeks to help “developing countries to combat climate change, including to enhance their capacity to access [Green Climate Fund] funds.”

On Thursday, State Department Special Envoy for Climate Change Todd Stern highlighted one further aspect of the joint statement: the question of differentiation between countries in U.N. climate negotiations. Under the Annex system adopted when the UNFCCC was set up in 1992, countries are divided into developed and developing buckets, with the first group responsible for reducing emissions under the Kyoto Protocol and the second group not. New language in the joint statement, however, seeks to ditch the developed-developing bifurcation while maintaining the general diplomatic thrust of “common but differentiated responsibilities and respective capabilities, in light of different national circumstances.” In short: Each country’s situation and responsibilities should be considered individually.

The shift is important for a couple reasons. First, it means that the two biggest emitters in the world acknowledge that the best way to think about relative contributions to climate action should be via a spectrum, not some simple binary. It’s a subtle point — but could be crucial for the Paris negotiations in December, as many negotiating parties are uncomfortable with their current developmental category. Making climate contributions (and eligibility for financial assistance) more flexible could increase the likelihood of a meaningful deal.

Second, under the Annex system, China is considered a developing country. In the international climate talks, that means that all of China’s pledges have been voluntary. If the U.S. and China push their new vision in Paris, it means China is willing to relinquish its developing-country status in the climate space. In the race for credible commitments, that could be the biggest move yet.