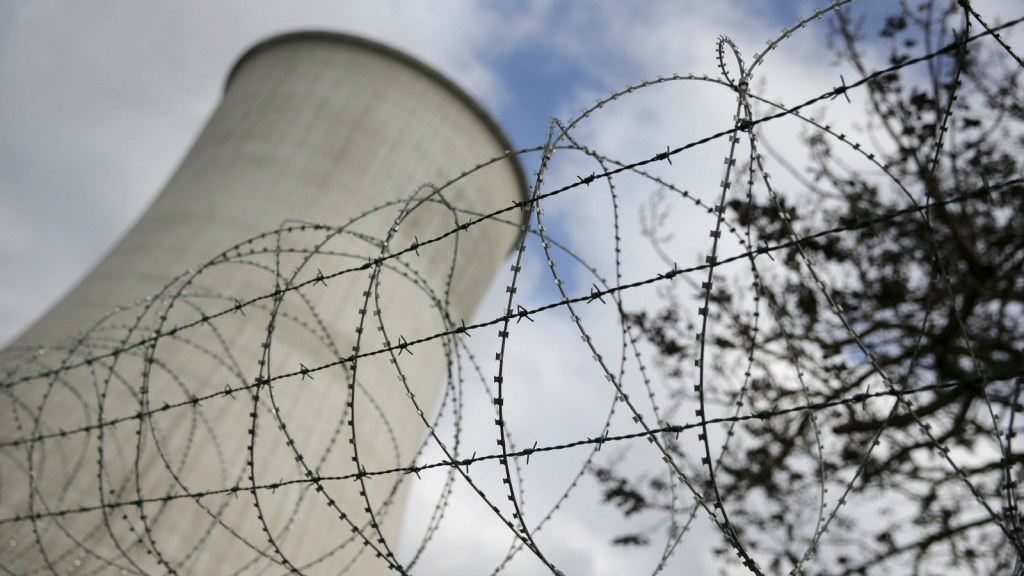 You’ve probably heard that Bernie Sanders has the most impressive climate agenda of any major-party presidential candidate in history. His proposals may be politically unrealistic, but they are bold. If Sanders were president and he had a pliant Congress, his carbon tax and investments in renewables would radically overhaul our energy system for the better.

But some enviro wonks say there is a serious defect in Sanders’ plan: his approach to nuclear energy. He has called for phasing out all U.S. nuclear power plants, which currently account for 19 percent of our electricity portfolio. Nuclear energy has plenty of problems: reactors can melt down, they are ripe targets for terrorists, they are wildly uneconomical, mining the uranium that feeds them is dangerous and environmentally destructive, and no one wants the spent fuel stored nearby. These are the reasons Sanders has long been an opponent of nuclear energy. A few decades ago, that was a widespread view on the left. But now climate change has become the main concern of many environmentalists, and nuclear energy’s saving grace is that it has virtually no carbon emissions.

Sanders’ own climate plan is, rightly, centered around the goal of transitioning away from fossil fuels. Even given a friendly political climate, that will be an enormous challenge. The U.S. currently gets about 67 percent of its electricity from fossil fuels, so all of that dirty energy must be replaced. Does it make sense to try to transition away from nuclear at the same time — to replace yet another 19 percent of our electric capacity — when nuclear power is not a climate threat?

And our need for electricity is going to grow dramatically, which will make greening our electricity system even harder. Although power generation is the biggest-emitting single sector of our economy, a majority of our emissions come from other sectors — burning fossil fuels in our cars, in our factories, and to heat our homes and businesses. To reach a carbon-free economy, we will need to switch transportation, heating, and industrial processes that currently use fossil fuels to run on electricity. For example, we should be shifting away from gasoline-powered cars and trucks to electric ones — and the electricity feeding them must be clean.

“We don’t think anything should be taken off the table, including building new nuclear plants and carbon capture and sequestration, because decarbonizing the energy sector by 2050 is going to be a huge challenge,” says Steve Clemmer, director of energy research for the Union of Concerned Scientists’ climate and energy program. The 2014 “Pathways to Deep Decarbonization” report by consulting firm Energy and Environmental Economics estimated that U.S. electricity demand would double as a result of electrifying sectors such as transportation.

Critics like Slate’s Eric Holthaus have slammed Sanders for his anti-nuclear stance. Environmental contrarian Ted Nordhaus recently did the same in USA Today. It’s an easy narrative: Idealistic lefty Vermonter Bernie Sanders opposes nuclear energy for sentimental reasons, even though getting rid of it would do more harm than good. Beware of unintended consequences!

But Sanders’ plan is not so simplistic and naive as it might appear at first blush. He doesn’t call for shutting down all nuclear power plants right away. Rather, he would deny their relicensing applications. Currently, there are 61 nuclear power plants with 99 reactors operating in the U.S., with a few more under construction. The vast majority were built in the 1970s, before the Three Mile Island nuclear meltdown and the Chernobyl disaster soured public opinion on nuclear energy. Typically, plants last around 50 to 60 years and are relicensed every 20 years. So plants that are coming up for relicensing would, if denied, maybe have their lives shortened by 20 years. Meanwhile, there are plenty of other forces working against nuclear.

The case for keeping nuclear power in the mix

Is hastening nuclear power’s demise a good idea? Holthaus, citing Nordhaus’ frequent collaborator Michael Shellenberger of the Breakthrough Institute, argues that if you ramp down nuclear too quickly, it will lead to an increase in the use of coal or gas.

That’s also the view of Devin Hartman, electricity policy manager for the R Street Institute, a center-right think tank, and a former energy market analyst at the Federal Energy Regulatory Commission. He points out that retired nuclear plants in the Northeast and California have been mostly replaced by increased natural gas usage. And in Japan and Germany, where the governments have been shutting down nuclear reactors since the Fukushima meltdown, coal use has spiked.

“Shutting down nuclear plants would create a little more demand for energy efficiency and renewables, but the net effect of nuclear retirements will generally be increasing emissions,” Hartman says.

That’s partly because there is excess coal- and gas-burning capacity in the current energy system. While generating an additional megawatt-hour of electricity from existing solar or wind facilities can be cheaper than burning coal, building a whole new set of wind turbines is more expensive than just feeding more gas into your existing gas-fired plant.

The case for pushing nuclear power out

Other experts, though, point out that nuclear power plants are beset with so many problems that they’re poised to die a natural death anyway. Sanders would just accelerate the transition, and that could be good for renewables, they argue.

The aging nuclear fleet in the U.S. is becoming increasingly uneconomical. “As reactors get older, they get more expensive to maintain. It’s not competitive with renewables or natural gas,” says Matthew McKinzie, a nuclear energy expert and advisor to the Natural Resources Defense Council Action Fund. “By mid-century, we might have 20 reactors operating.”

Getting older nuclear plants in good enough shape to get relicensed can be expensive, as environmental and safety standards have been raised since the plants were built. Renewables advocates argue that the money could be put to better uses.

“Take Diablo Canyon, which is up for re-permitting [in 2024],” says Mark Jacobson, a professor of civil and environmental engineering at Stanford, referring to a nuclear power plant 160 miles northwest of Los Angeles on the California coast. The plant has serious environmental problems that would need to be fixed. According to the Los Angeles Times, “Every day, Diablo’s cooling system sucks in 2.5 billion gallons of seawater. An estimated 1.5 billion fish eggs and larvae each year get swept along for the ride, churned, cooked and killed. The water then returns to the sea about 18.5 degrees warmer than it left.” Diablo Canyon is also located along a series of fault lines, some of which were discovered after it was built. That puts it at high risk of a Fukushima-like event if there were an earthquake, with possibly even more devastating results because the ocean currents there would send radiation toward other communities along the coast instead of out to sea. “To get relicensed, it would need new cooling towers and it might need to upgrade for earthquake safety,” says Jacobson. “New cooling towers would cost $8 billion. If you took that $8 billion, you could replace Diablo Canyon with on-shore wind and utility-scale solar. So to say closing it would increase emissions is just nonsense.”

Whether a utility would actually go that route would depend a lot on the specific economic and policy situation. If Diablo Canyon’s owner, Pacific Gas and Electric Company, were denied a new license, it could decide to replace the plant with renewables instead of natural gas; California’s renewable portfolio standard might push the utility in that direction. But in other states and regions, depending on the policies in place and the costs of gas versus renewables, utilities might be more likely to turn to gas instead of wind and solar.

There’s also the prospect of building new nuclear plants, but that’s extremely expensive too. Under current conditions, it would be completely uneconomical without loan guarantees provided by the federal government. At nuclear power plants currently under construction in Georgia and South Carolina, costs have already run way beyond initial projections. Jacobson argues that federal nuclear loan guarantees should be ended and the funds used instead to support development of renewables.

How the nuclear phaseout fits into Sanders’ bigger plan

Sanders’ critics are right to note that under the current set of policies in place in the U.S., renewables won’t account for a majority of our energy portfolio for at least another two decades, so it’s not safe to assume that a retired nuclear plant would be replaced by clean energy. In that context, lopping 20 years off the life of a nuclear reactor may very well mean higher carbon emissions than if you relicensed it.

But Sanders’ desire to phase out nuclear power makes a lot more sense in the context of his broader climate and energy plan. He would make fossil fuels more expensive through a carbon tax, and make major investments in clean energy, so renewables would be better poised to replace power lost from shuttered nuclear plants.

The sticking point, of course, is that even if Sanders got to the White House, he wouldn’t get a cooperative Congress, so his larger climate plan would not be enacted. In that case, deciding whether to relicense nuclear plants would be a trickier matter.

The Sanders campaign declined to comment directly on what Sanders would do if he were president and found himself in that situation, offering only this emailed statement from spokesman Karthik Ganapathy: “Sen. Sanders knows there are lots of reasons why nuclear power is a bad idea. Whether it’s the exceptional destructiveness of uranium mining, the fact that there’s no good way to store nuclear waste or the lingering risk of a tragedy like Fukushima or Chernobyl in the U.S., the truth is: nuclear power is a cure worse than the disease. Safer, cleaner energy sources like wind and solar will help us meet America’s energy needs while protecting the health of our people and combatting the threat of climate change.”

Those views put Sanders right in line with environmental groups like the Sierra Club and Greenpeace, which oppose nuclear power across the board.

Some other green groups take a more nuanced approach. NRDC, for example, supports relicensing plants in situations where it’s safer and the plants can’t yet be replaced by renewable energy, and it calls for rejecting those — such as Indian Point in Westchester, N.Y. — that are uniquely dangerous. Alexander Ochs, senior director of climate and energy at the Worldwatch Institute, says we should put a moratorium on new nuclear plant construction and subject existing plants to “the closest safety scrutiny.” In the end, while these policy positions are based on a different analysis than Sanders’, they differ from his in degree more than in kind: they would hasten the natural death of nuclear energy, only more slowly than Sanders would, in the interest of limiting short-term emissions.

While Sanders’ nuclear power phaseout might not be the best idea from a climate perspective, it’s not actually the shallow hippie caricature that his critics describe.