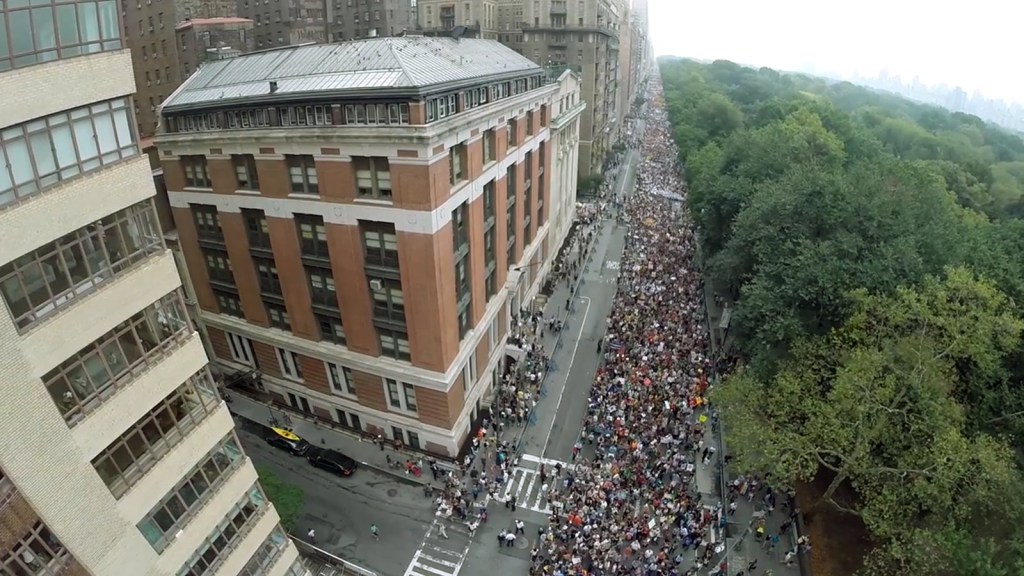 Damn, that was big! The People’s Climate March in New York City on Sunday brought out record crowds.

An official count conducted at the People’s Climate March in New York City showed that over 310,000 people participated in the largest climate rally in history — more than tripling pre-march estimates of 100,000. …

Shattering expectations, this official attendee count makes the People’s Climate March New York City’s largest social demonstration in the last decade. Well above the 50,000 who attended Forward on Climate in 2013 and the 80,000 who attended the 2009 march at the Copenhagen climate talks, the 310,000 attendees at today’s demonstration have set world history just days before a UN Summit bringing world leaders together to discuss tangible action on climate change. …

Relying on a crowd density analysis formula developed by a professor of game theory and complex systems at Carnegie Mellon University, the official attendee count calculates the average density of the march crowd over specific intervals, factoring in the surface area covered by the crowd and the speed and duration of the march.

At 3:00pm, march organizers released an initial count of 310,000 people based on the crowd density along the march route, which stretched across Manhattan from 93rd Street and Central Park West to 34th Street and 11th Avenue. But as the day continued, reports came in of tens of thousands more protesters marching outside the official route, streaming down avenues in midtown Manhattan. At 5:00pm, march organizers had to send out a text asking marchers to disperse from the march route because the crowds had swelled beyond the route’s capacity.