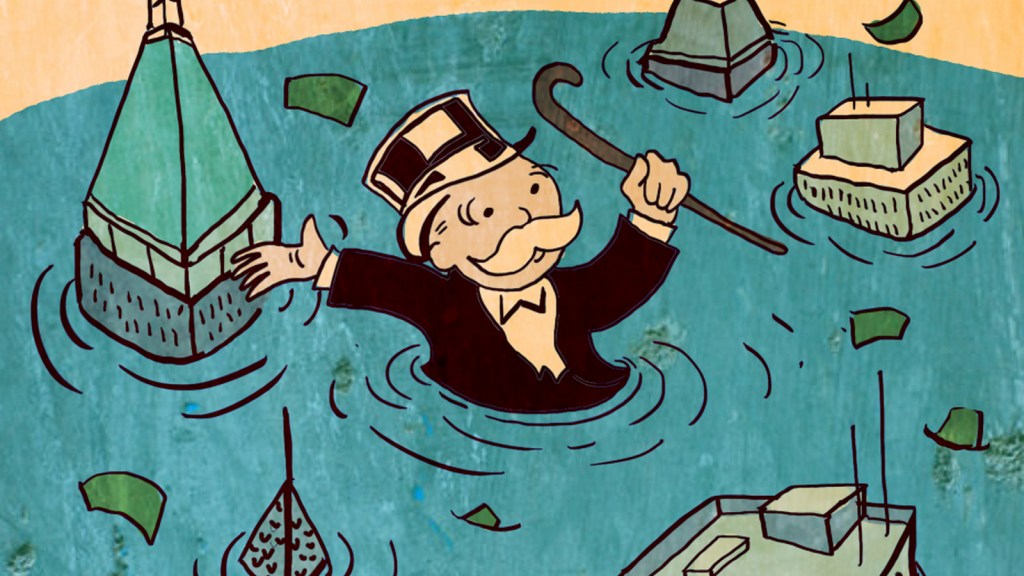 On the Saturday morning before what was going to be, everyone hoped, the largest climate protest in history, two very different groups gathered in Manhattan to discuss the finer points of making that protest happen without bringing disaster down on anyone.

At the Service Employees International Union headquarters near Times Square, mosaics of noble service workers decorate the façade. Inside, in an auditorium on the second floor, Steve Sherman, coordinator of security for the People’s Climate March, speaks to a group of several hundred volunteers who have signed on to work as “peacekeepers” along the route. Much has been said about the diversity of the participants of the People’s Climate March, but I haven’t seen great evidence of it until now. This is, indeed, a remarkably diverse group — in age, in fashion choices, and in presumed ethnicities.

Sherman is a solid guy with a graying ponytail, with the general demeanor of someone who can only be described as a mensch. “Police are still police,” says Sherman. “They have been trained in violence. But this is not the Giuliani or Bloomberg administration any more. They are giving us concessions that they would not normally give, because they know that our peacekeepers will be doing their work for them.”

“Doing their work for them” involves spotting people who are doing the kind of things that would attract the attention of the police — a Keystone activist getting into an argument with a pipeline welder, a climate denier who just showed up looking for a fight — and defusing it, before anyone realizes what is happening.

To that end, says Sherman, no cell phones. “You can have your cell phone, but keep it in your pocket. Do not make calls. Do not text. No selfies. Murphy’s law works! If something is going to happen, it will happen while you are looking at your phone.”

The last 10 minutes of the workshop are dedicated to roleplaying Peacekeeper and Difficult Protester. The Difficult Protester across from me, a serene woman in yoga wear, really gets into it. We all try to remember what we’ve learned: Don’t step in between two people arguing, don’t try to be funny, don’t criticize them for what they’re feeling, and don’t touch anyone, especially a police officer, because then you can be charged with misdemeanor or felony assault, depending on how annoyed the police officer is.

We all switch roles, and now it’s my turn to be the difficult protester. The noise is deafening, but exhilarating. I can’t even hear what I’m yelling about.

When I arrived in New York, one thing that I noticed, right away, was how many police there were. My first morning in town, I borrowed a friend’s bike and rode it through Central Park, and everywhere I looked, there was a policeman. I saw four of them writing a ticket for a single bicyclist. In New York, there are more police per resident than in any other American city except one: Washington, D.C.

If everything goes according to plan, the People’s Climate March will be the largest climate protest in world history. Like a lot of intended “largest”s, it has already inspired a lot of armchair quarterbacking. Why have a march two whole days before the U.N. Climate Summit, when the U.N. Climate Summit is the group you want to hear your message? Why is the parade route so lame? Why such low standards about who gets to join? How can the march be so non-confrontational when the state of the climate is so manifestly not good?

When I arrive in Tompkins Square Park for a planning session organized by Flood Wall Street, there is more roleplaying. This time, though, we’re pretending to be rising sea levels, coming to shame Wall Street with our climate change–induced wetness. While nothing we’re doing is overtly threatening, we will be blocking traffic, and the assumption is that, eventually, police in the area will get tired of it and start arresting people. “They won’t do it right away,” says one of the organizers. “But eventually they’ll get tired, and they’ll just start arresting people, without making an order to disperse first.”

“Fill the space!” says the rosy-cheeked workshop leader, who I am not going to identify further, because organizing direct action in New York City is complicated enough without having your name posted on the internet as an instigator of it. “Think about being water!” he continues. “Seeping! Flowing! Maybe make water noises! Surge!” At this, the crowd of about 30 direct-action trainees drops to the ground. The asphalt of Tompkins Square Park smells more than a little like pee.

“OK!” says the workshop leader, as we all lie sprawled on the pavement. Tompkins Square Park has seen protest organizing since at least the 1870s, but it’s also a popular spot for dog park activities and little kid birthday parties. A mother, walking by, points to us and says to her child, “See, honey — those are the protestors I was telling you about!” A man pulls out his camera and starts to take a picture, until one of the organizers approaches him and tells him, politely, that everyone here is preparing to break the law and would prefer not to have their photos taken right now.

“That looked a little better,” the workshop leader continues. “Don’t go down too fast. That might alarm the police. Do it gracefully. Like water.”

Many of the organizers learned their stuff hanging around Zucotti Park during Occupy Wall Street. The police response to the encampment was so intense that many found themselves becoming involuntary experts in how it goes to be arrested for civil disobedience in New York City. “Our best advice in getting arrested?” says one of the organizers. “Don’t talk. If police say something like, ‘Wow, you did a really good job putting up that banner,’ don’t say, ‘Yeah.’ Because you just incriminated yourself. There’s this really fun song you can sing instead.”

The organizers burst into an awkward but catchy freestyle:

Other things we learn: Bring warm clothing; Jail is cold. If you are injured, it is very important to have your injuries treated as soon as possible, no matter what the police say. When someone cuffs or zip-ties your wrists, flex your hands, so that you won’t get nerve damage if you have to stay handcuffed for a long time. If you don’t want your retinas scanned, you have to explicitly say so, because NYPD loves their retinal scanner and will just stick it in your face and try to scan you. If you’re an out-of-towner who gets arrested and you’re going to miss a court date, be sure to call the National Lawyers Guild (NLG), because otherwise you will wind up with a warrant out for your arrest in the state of New York.

If you are not a U.S. citizen, do not get arrested, because charges can snowball and lead to deportation. If the police offer to lower your charges, don’t believe them — only a district attorney can do that. If you have medications that you need while you’re in jail, bring them in a prescription bottle with your name on it — because if you have loose pills you can be charged with carrying a controlled substance. Wearing a bandanna over your face is illegal in New York. Do not mistake this for real direct-action training, because there is so much more to learn about how best to behave when someone might arrest you.

And, maybe, to all this, add: Don’t quibble over diction at your direct action training. “Is there any chance,” says one of the prospective protesters, “we could change the word ‘surge’ to ‘flood?'”

“No,” says one of the organizers. “You’ll hear ‘flood’ a lot already at this march.”

“What about ‘swell’?” says the protester. “Cops already think we’re a bunch of anarchists. If they hear the word ‘surge,’ they could think ‘Afghanistan.'”

“The time for that,” says the organizer, “will be at the meeting tonight. Right now, is the time to practice being water.”