In Florida, it's billionaire climate hawk vs. climate-denying governor. Who will win? 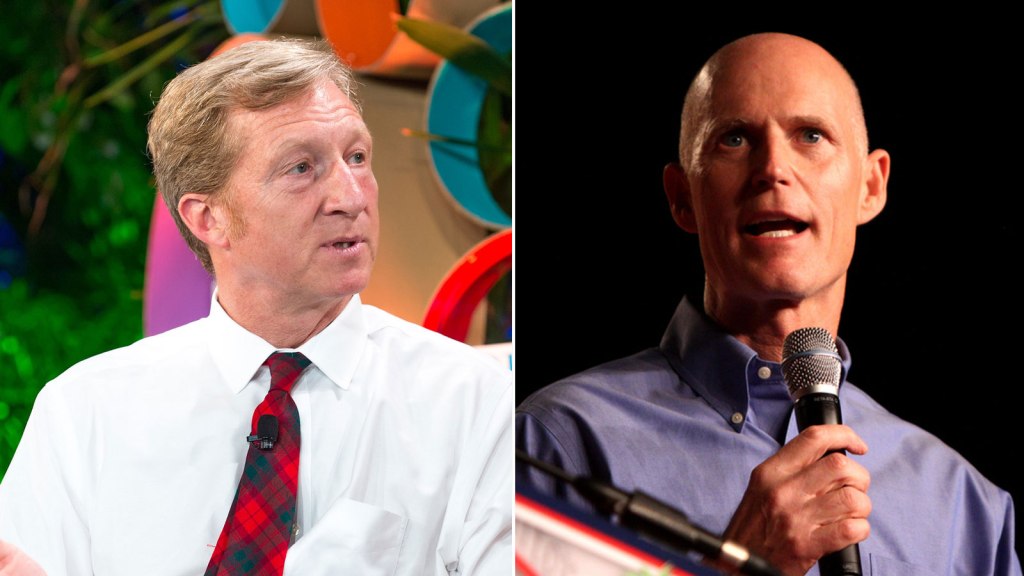 In Florida, it’s billionaire climate hawk vs. climate-denying governor. Who will win?

After billionaire activist Tom Steyer pledged to spend $50 million defeating climate change deniers this fall, it came as no surprise that he set his sights on Florida Gov. Rick Scott (R).

Scott governs from the far right in a large swing state that is highly vulnerable to climate change. A Tampa Bay Times editorial recently called Scott’s record “an environmental disaster,” because he “sided with polluters and developers over public health, refused to acknowledge the impact of man-made climate change and stalled any serious attempt to address water quality, land conservation or growth management.” Scott’s job approval ratings were low even before his reelection campaign began, and his challenger, former Gov. Charlie Crist (D, formerly R), has strong environmental credentials.

“Scott started off with an anti-tax, anti-regulatory approach to government,” says Eric Draper, executive director of Audubon Florida. “That had effect on the environment. We saw bills signed that weakened environmental regulations and reduced spending for environmental programs.”

There is a real need for greens to pony up the green for Crist, in order to offset Scott’s generous support from the dirty energy sector. Three energy utilities — Duke Energy, TECO Energy, and Florida Power & Light — have each given more than $1 million to Scott, his political action committee, or the state Republican Party. That’s because Scott, in the words of Reuters, “support[ed] utility rate hikes to cover massive investments in new power lines, natural gas pipelines and nuclear plants that environmentalists oppose … [while] the state’s renewable energy programs, including solar installation rebates, were dismantled.” Crist, on the other hand, “was a darling of clean energy advocates” for challenging those same utilities to get off of fossil fuels.

And so NextGen Climate Action Committee, the campaign arm of Steyer’s advocacy group, is hard at work in Florida. It has a field operation with 21 offices and more than 500 staffers and volunteers in the state, and they have knocked on more than 300,000 doors, made over 500,000 phone calls, and gotten at least 45,000 people to commit to vote on climate this fall, the group says. Most of the media attention NextGen has garnered, though, is for its TV commercials. About half of the $8.6 million it’s spending in the state has gone to plastering the airwaves with nine ads, seven in English and two Spanish-language companions.

The ads, however, don’t discuss climate change. Instead they focus on Scott’s corporate cronyism. “[NextGen Climate] have not used the words ‘climate change’ too much,” observes Susan McManus, an expert on Florida politics at the University of South of Florida and director of the Sunshine State poll.

The overarching critique of Scott running through these ads is characterological: that he helps corporations milk the public fisc, just like his hospital company did when it overbilled the federal government and had to plead guilty to Medicare fraud. The recurring tagline — “Rick Scott: For the powerful few, not you” — says nothing about warmer temperatures or rising sea levels.

Some of the ads do, however, focus on Scott’s donations from polluting energy companies and agribusinesses. One ad attacks Scott for taking donations from Duke Energy while the company has charged citizens extra fees to raise money to build a new nuclear power plant and upgrade another. Both projects have been abandoned, but Duke has not returned the money.

“Florida fleeced by Duke Energy,” says the NextGen Climate narrator. “Rick Scott knew, but he’s letting Duke keep collecting billions anyway.” PolitiFact rated the claim that Scott is letting Duke collect the money only “half true,” since Duke’s agreement with the state is actually up to Florida’s Public Service Commission. The governor appoints people to the PSC, but four of the five members were originally appointed by Crist. PolitiFact does say Scott “has been notably silent” on the issue.

Another ad says Scott “drank from a fountain of campaign cash from the company that profited off pollution,” because he took $200,000 from members of a family whose company leased land for an oil well that would use an unconventional and risky extraction method, similar to fracking, called “acid stimulation.” PolitiFact also gave a half-true rating to that claim, since it’s not clear any pollution occurred. NextGen Climate also has an ad complaining that Scott is raising money from the sugar industry while “bailing out” sugar companies by using public funds to restore Everglades wetlands that were damaged by sugar plantations.

This is all shrewd politics. Even in hot, humid Florida, people respond to their fears that they are being ripped off more than they do to studies showing that global average temperatures are slowly rising. Take a look at state polls: When asked “What is the biggest environmental problem facing Florida today?” 39 percent of Sunshine State poll respondents cite water scarcity or threats to water quality. Nine percent cite air pollution, 6 percent choose “Litter/trash/not recycling,” 5 percent say “Overdevelopment, overpopulation,” and 4 percent choose the Everglades. Only 3 percent choose climate change, while 18 percent choose nothing at all. Doing worse than litter and “none of the above” is not a sign that your issue has grabbed the public imagination. Yes, air pollution could be a proxy for greenhouse gas emissions, and climate change will affect water scarcity, but it’s clear that insofar as climate change resonates with Florida voters, it does so by affecting something more immediate. “The response climate change by itself gets is very low, but the environment means a lot in Florida, including water and pollution,” says McManus.

And so NextGen Climate is trying to illustrate for voters how politicians being in the pocket of entrenched corporate energy utilities hits them in their pockets. “We’re working to make climate change a tangible issue — whether it’s politicians siding with donors instead of promoting clean energy policies or putting taxpayers on the hook for cleaning up pollution,” says Suzanne Henkels, a spokesperson for NextGen Climate. “We’re not talking about polar bears and ice caps. We’re making it an issue that people will turn out to vote on.”

Even an issue that moves only 3 percent of voters matters in a tied race. “In a state that’s evenly divided like ours, if you pull somebody just a little bit in your direction, that can be the difference between winning and losing,” says McManus.

That’s especially true if it helps solve the Democrats’ larger problem this cycle, which is making sure the voters who tend to show up for presidential elections but not the midterms — and who are disproportionately young and Latino — come out this time. NextGen Climate says it is targeting those voters. The group also argues that its ads have moved the race in Crist’s direction. Last month, it released a memo citing its own internal polling, which it says shows that in the media markets it has targeted — Tampa, West Palm Beach, and Ft. Myers — Crist has pulled ahead of Scott, most voters have heard of the Duke Energy and sugar industry donations, and Scott’s negative ratings have increased.

In statewide public polls, the race is a dead heat, with every recent poll showing a margin of five points or fewer. Some might say the trend lines are slightly in Crist’s favor, as more recent polls are the ones that have him up slightly.

Since those polls don’t ask why people are leaning one way or another, it is impossible to say if environmental issues and the NextGen Climate campaign have made a difference for Crist. Elections decided by the environment rather than top-tier issues like abortion or the economy are few and far between. The environment and especially climate change often rank among the issues least frequently cited by voters as important. That’s why, for example, Sen. Mark Udall (D-Colo.) is focusing on his opponent Rep. Cory Gardner’s (R-Colo.) unpopular opposition to abortion rights, rather than his incoherent refusal to concede the reality of climate science.

But Florida is a bit of an outlier. The state is mostly barely above sea level, surrounded by the Atlantic Ocean, and vulnerable to storms and floods. Its coastal ecosystems and famous Everglades are fragile. Its economy depends on attracting a steady flow of retirees and tourists. So the public’s obsession with immediate economic growth over all else cuts in favor of environmental protection and climate change mitigation, rather than against it.

If nothing else, NextGen Climate may have forced some grudging moderation from Scott. In August, one day after the Miami Herald reported on Steyer’s plans to spend on the Florida race, Scott issued his “Keep Florida Beautiful” plan. The plan is heavy on conservation issues like Everglades restoration, and it makes no mention of climate change.

But it is climate change that will ultimately pose the greatest threat to all of Florida’s top attractions, from the Everglades to Miami Beach. Imagine a whole state’s worth of shuffleboard courts, bingo parlors, strip malls, chain motels, and subdivisions, underwater. No “Redneck Riviera,” no Disney World, nowhere for cruise ships to dock. No “Florida Man” and “Florida Woman” Twitter handles. On second thought, maybe Rick Scott wouldn’t be so bad after all.