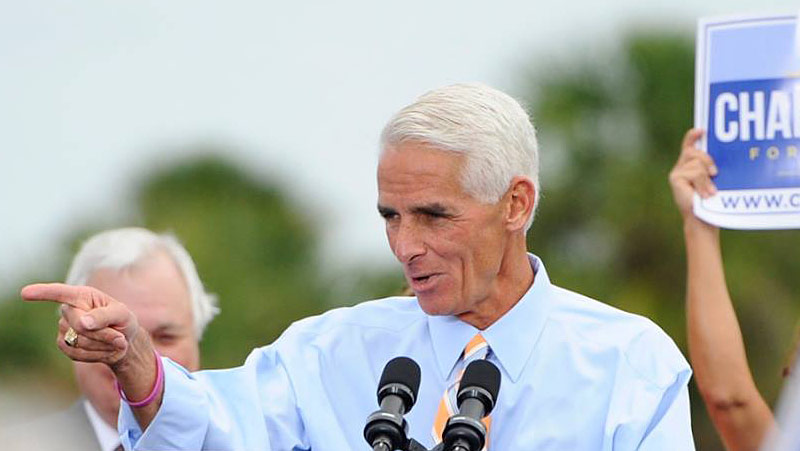 Florida is a swing state in presidential elections — as anyone who didn’t spend the year 2000 under a rock knows all too well. It has frequently elected Democrats as well as Republicans, often moderates from both parties, at the statewide level. And no state is more at risk from climate change. As an article in Sunday’s New York Times and a recent story in Rolling Stone have explained, South Florida’s low-lying barrier islands and wetlands could be fully submerged within a century. So it is an odd, ironic artifact of the current Tea Party ascendancy that Florida’s state legislature and governor’s mansion are in the control of right-wing Republicans who are hostile to environmental regulations.

But that could change next year. Gov. Rick Scott is up for reelection, and his newly announced opponent may prove to be an environmental savior for the state: former Republican Gov. Charlie Crist, now running as a Democrat.

In 2010, Crist ran for U.S. Senate instead of for reelection as governor. But when he found himself badly trailing Marco Rubio in primary polls, he quit the GOP to run as independent. He started moving leftward, taking steps like deleting references to his past opposition to abortion rights from his campaign website. He still lost the race. Last year, he switched his party registration to Democrat.

Crist built up an impressively green record during his term as governor, from 2007 to 2011. Florida environmental activists found themselves in the unusual position of having virtually no complaints with a Republican governor.

“I liked him personally and thought that he did a good job on the environment,” says Eric Draper, executive director of Audubon Florida. “My only complaint was that he stopped being governor.”

Crist was especially attuned to climate change. (Back when he was auditioning to be John McCain’s running mate on the 2008 presidential ticket, that was an asset rather than a liability for Republicans with national aspirations.) “Crist put climate change on the agenda,” says Draper. As governor, he worked to mitigate climate change by reducing Florida’s greenhouse gas emissions and restoring the Everglades, an essential carbon sink and natural layer of protection in storms. The sensitive wetlands has been drained for development, polluted by agribusiness, and is threatened by salinification due to rising sea levels.

“He was a champion even when he was in the legislature, going back to the 1990s,” says Mary Barley, president of Everglades Trust, which lobbies for the Everglades. “He understands the economic and environmental side of the Everglades.”

Frank Jackalone, Florida staff director for the Sierra Club, says Crist was “strong on several environmental issues.” A partial list of his accomplishments:

On many environmental issues, Crist was pushing against an open door. Florida’s economy is heavily dependent on tourism, and its environment is especially sensitive, so it benefits a Florida politician to be green. For example, opposition to offshore oil drilling is fairly widespread. “Crist was a strong opponent of offshore drilling, like many Florida politicians,” notes Jackalone. Crist’s predecessor, Jeb Bush, was a generally conservative Republican but a relative moderate on the environment; he also opposed offshore drilling near Florida’s coastline.

The big change occurred in 2010, when the national Tea Party wave helped put Rubio in the Senate, Scott in the governor’s mansion, and more conservatives in the state legislature. This new breed of Florida Republicans, like their counterparts in Congress, are more ideological and less pragmatic. They fear the wrath of their base far more than they fear moderate swing voters. Consequently, Scott has halted or undone much of the environmental progress made under Crist. Early in his tenure, Scott made a point of rejecting federal money for high-speed rail, simply out of ideological hostility to transportation in any form other than private vehicles.

Still, Florida environmentalists say that Scott’s conservative impulses have been gradually tempered by popular opinion. “The very first thing Scott said he’d do is close state parks,” recalls Barley. “Everybody came out and not a single park was closed. Scott is now going along to get along.”

If Crist were elected, he might want to be an environmental champion, but how aggressively would he deal with the legislature, especially if it stays in GOP hands? When he was governor he signed into law a number of bills passed by the legislature and opposed by environmentalists. For example, he signed a measure to facilitate the taking of wetlands and wildlife habitats for airport expansion, and another that short-circuited the state Department of Community Affairs’ review of plans that might contribute to urban sprawl. (Scott has since eliminated the department entirely.)

It’s unclear whether these bill signings represented Crist’s policy preferences, a pragmatic decision to choose his battles with the legislature, or an effort to appeal to the right wing of the Republican Party as he prepared to run for Senate. If either of the first two, he might follow the same path in another term as a Democrat. If the latter, he wouldn’t. Since Republicans do not have a veto-proof majority in the state capitol, this could matter a great deal.

If Crist wins the Democratic primary, his chances of unseating Scott look promising. Scott is one of the country’s most unpopular governors. According to recent polling, only 33 percent of Floridians approve of Scott’s performance, while 55 percent disapprove, and Crist leads Scott by 12 points in a hypothetical matchup.

If Crist were to win, environmentalists predict that he would revive the Everglades restoration deal, set a renewable energy portfolio standard, and make climate change a priority. No state stands to benefit more from averting catastrophic climate change than Florida, so the state’s voters would have plenty of incentive to elect him.