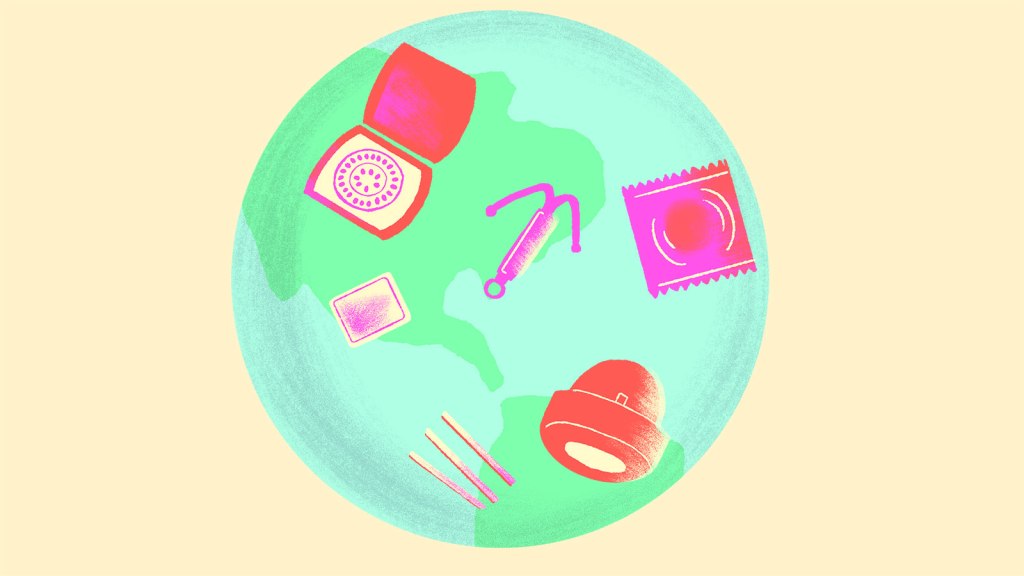 Can we talk about something that’s been on my mind for a long time? Since I was – oh, about 17 years old? Not getting pregnant.

There are many reasons for this hang-up – besides the reason that I’ve inherited a wildly anxious brain. (Fact: I once took a pregnancy test because my period was six hours late. Apologies to my boyfriend at the time for that nervous meltdown!) But the most dominant, overarching reason — and cause for that anxiety — is that right now, at the age of 25, I’m not exactly eager to further the noble Andrews family line.

Imagine my surprise, then, to learn that 25 is the average age at which an American woman has her first child. This fact was so shocking to me that I set out to do a little research on the state of contraception in our fair United States. Is 25 really the age at which women are choosing to delve into motherhood?

Short answer: not necessarily. A study by the Guttmacher Institute found that 51 percent of pregnancies in the United States in 2008 were unintended. For the record, that’s higher than both the global average of 40 percent and the average for developed countries, which is 47 percent.

At this point, you may be asking yourself: “Why am I reading about this here? How is this Gristy?” I’m going to take a wild guess and assume that there are few things you’d be less jazzed to think about during sex than carbon emissions, so I’ll keep this brief and reference a great piece on family planning and climate change that Valerie Tarico wrote for Grist last month. From her article (but seriously, you should read the whole thing):

The Aspen Institute has estimated that voluntary family planning for all who want it could provide 8 to 15 percent of needed carbon reductions. David Wheeler and Dan Hammer at the Center for Global Development argue that putting climate dollars into family planning programs (to make up for expected shortfalls) compares favorably to many investments in low-carbon technologies.

It doesn’t take scientific research or the brain of Bill Gates to figure out that our impacts grow as our numbers grow — that gains in the efficiency of, say, air conditioners or cars can be swamped by the growing number of air-conditioned houses and cars on the road. Analysis of population trajectories and effects seems like an obvious and necessary part of the climate dialogue.

Both of those studies have a focus on the developing world, but that’s not the only place where family planning can make a big difference for the climate. In fact, considering that we wealthy people use so many more resources and cause so much more carbon pollution than the rest of the world, we need to be doing a lot better with contraception ourselves. As a 2010 study in the Proceedings of the National Academy of Sciences put it, “change in U.S. population growth has a pronounced effect on emissions, despite its small contribution to global differences in population outcomes, because of the relatively high per capita emissions.”

It’s pretty alarming, then, that one out of every two U.S. pregnancies is unintended. But this is not just an issue of (cute little bronze-cast) carbon footprints. It’s crucial, for the purposes of social and economic equity, that women have all of the resources and information they need to be able to have children when and how they want to do so. Study after study confirms that when women are better educated and informed, they will choose to have fewer children — and an unintended pregnancy can have serious impacts on a woman’s quality of life.

Why, in one of the wealthiest countries in the entire world, is the unintended pregnancy rate so high? Where are we screwing up? How are we failing women?

From my own personal experience, I’m really not sure. I went to an inner-city public high school with a predominately low-income student body. Teenage motherhood was enough of a reality that we had an in-school nursery for students’ children. (For the record, I think that this was a terrific resource.)

Then, by contrast, I went a private college where many of the students came from very privileged backgrounds. And I was regularly shocked by the cavalier attitude that some of my friends and peers took to contraception in general. “We didn’t use a condom, and I’ve missed like three pills in a row,” someone would say, quite casually, and I would immediately start to feel dizzy from heart palpitations.

“Am I being nuts, to be making such a big deal out of this in my own brain?” I started to think. “Do I need to start taking benzodiazepines with my Ortho Tri-Cyclen?” (This is a joke, obviously. Always ask your doctor before you mix medications!)

No. I don’t believe that I am crazy (not for this, at least). An unexpected, unplanned pregnancy is a big deal, both for many of the women who experience them and for our society at large. The fact that we have so many makes me think that somewhere along the line, the way we talk about sex and deal with contraception got screwed-up in our country.

I want to explore the ways in which birth control can become second nature – not something that is enough of a pain in the ass that the average woman might be prone to neglect it, and also not a cause for a low, constant undercurrent of anxiety for the more Type-A among us.

So, as a 25-year-old woman who is not prepared to start down the motherhood path, I’m going to try to answer this question: How can we make contraception really work in the United States, for the benefit of individual women and our society as a whole? Follow along as I investigate the options to find the ones that are the most convenient, effective, and easy to use.