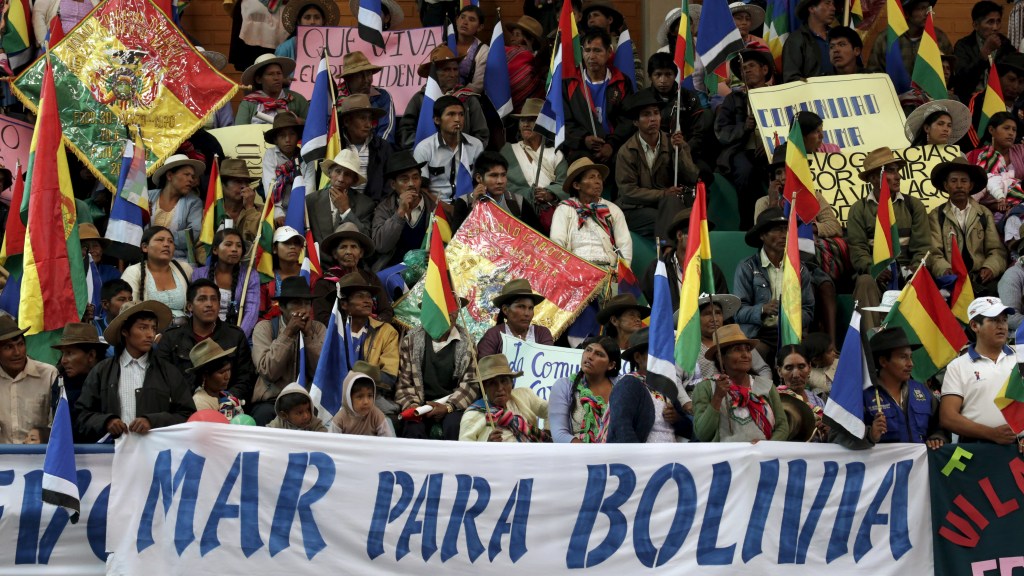 In the world of U.N. climate negotiations, as with most things in life, there are heroes and villains. Heroes are countries like, say, tiny Bhutan, which has pledged to remain entirely carbon neutral and keep a minimum of 60 percent of its land under forest cover. Villains are countries like Russia, whose carbon-cutting pledge has been described as a “magnum opus of hypotheticals.” And then there are vigilantes like Bolivia.

On Monday, Bolivia communicated its climate pledge to the U.N., and with it, 10 “structural solutions to the climate crisis.” Top of the list: the “adoption of a new model of civilization in a world without consumerism, commercialism, and warmongering, a world without capitalism.” Negotiate that, ineptocrats!

Also on the list were items like public implementation of the human right to water, establishment of an International Court of Climate Justice and Mother Earth, reallocation of military spending to climate-change adaptation projects, and the elimination of technological patents. If that doesn’t make you want to kick down the U.N. General Assembly door and hammer out an Andean flute solo at Ban Ki-moon’s feet, I really don’t know what lights your fire.

Ban Ki-moon for his part was in Bolivia preceding the delivery of its climate pledge and mini-manifesto. “Caring for Mother Earth is a moral issue,” he said in Cochabamba on Sunday, speaking at the World People’s Conference on Climate Change and the Defense of Life. “We must change how we use Mother Earth’s resources, and live in a manner that is sustainable.”

“Droughts. Fires. Floods. Landslides. Glaciers melting. Oceans turning to acid. Mother Earth is giving us a warning. We must listen,” said Ban Ki-moon. “And we must act.”

Act we must. But one of the problems with vigilantes is that they’re often accused of hypocrisy. Bolivia is no exception. Petroleum gas makes up nearly 50 percent of the country’s exports, and another 4 percent comes from crude oil. And while the country’s climate pledge vows to eliminate illegal deforestation, it has nothing to say by way of legal deforestation, which fuels the expansion of Bolivia’s soybean plantations.

Bolivian President Evo Morales recently came under fire for passing a set of decrees that will allow oil and mineral prospecting in several of the country’s national parks. The hypocrisy is of two degrees here, since in addition to perpetuating an extractive fossil fuel industry, much of the land exploitation will affect largely indigenous territory. Two of the country’s “structural solutions to the climate crisis” included the “eradication of the commodification of nature” and the decolonization of natural resources. This dissonance breeds an understandable skepticism toward Bolivian climate action among climate hawks.

We can likely expect more of these kinds of grand statements and attempted rewrites in the rest of the run-up to December’s Paris Climate Conference. Also on Monday, a team of researchers led by the U.K.’s former chief climate adviser argued in Nature that the goal of the Paris negotiations should be to implement a global carbon price, a tax (or equivalent) that polluters would have to pay for each ton of carbon dioxide emitted. Which, at this point in the game — when negotiators are splitting hairs over whether to use the word “contribution” or “commitment” to describe countries’ pledges — is exceedingly unlikely.

But so is dismantling capitalism. And, setting hypocrisy aside for the moment, that’s exactly why radical statements like Bolivia’s (and projects like This Changes Everything, for example) are so important: Lodging deep discomfort with the status quo and offering visions of alternative realities are the only ways to actually confront structural problems. After that, there’s just that minor detail known as follow-through.