Brown to student activists: We can't live without coal 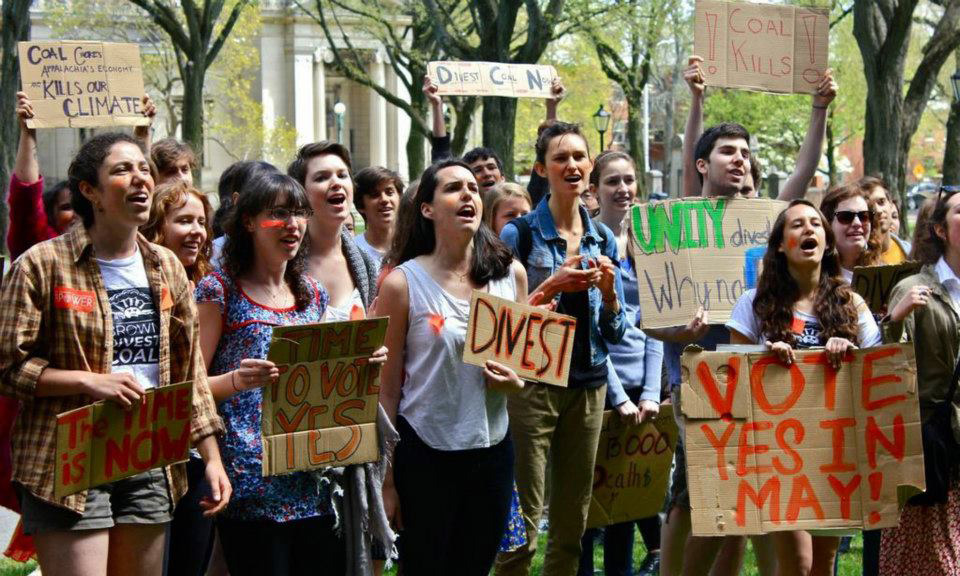 Brown to student activists: We can’t live without coal

Rachel Bishop, a recent Brown grad involved in the university’s divestment movement, has been spending a lot of time navigating the ins and outs of college governance.

“The president chairs the committee,” she says, of the group of Brown’s trustees who hold sway over the direction of the university’s investments. “We know that the five committee members we asked to recuse themselves because of conflicts of interest did not do so. We know that they didn’t hold a vote. They just had a conversation.”

One of the five who did not bow out is also noteworthy for having a large number of employees under investigation for insider trading. Bishop will have to wait 25 years to know what the discussion was, and who said what, because that’s when Brown University’s archives will unseal the minutes of the meeting.

All she knows, for now, is that Brown Divest Coal — which appeared to have some of the most practical, low-key goals in the student divestment movement — just lost its bid to have the university divest from the coal-related companies in its endowment. When Brown divested from businesses connected to apartheid South Africa in the ’80s, the college had to shift around 13 percent of its endowment into other funds. Bishop and the other members of the campaign had  crafted their demands narrowly, with an eye to what the advisory committee might view as feasible.

The students zeroed in on 15 companies in the school’s portfolio, or 1 percent of the school’s $2.86 billion endowment. They settled on a simple villain — one that they were fairly sure that Brown’s president, Christina Paxson, a former public health researcher [PDF], would also find villainous.  “I mean, it’s coal,” said Bishop. “COAL. There’s no argument for coal that even sounds good.”

They went through the proper channels: In the wake of Brown’s decision to divest from South Africa, the school formed a committee to deal specifically with issues of ethics and the school’s endowment. Over the years the Advisory Committee on Corporate Responsibility in Investment Policy, or ACCRIP has recommended that Brown divest from HEI Hotels, as well as the tobacco industry, and companies doing business in Darfur — all of which the university has done.

Still, says Bishop, “we pretty much knew, when the five people with coal industry ties didn’t remove themselves, that this would be the result.” To explain the Brown Corporation’s decision, Paxson wrote one of the more fascinating “Why we aren’t divesting from climate change” letters in recent memory:

Although the social harm is clear, this harm is moderated by the fact that coal is currently necessary for the functioning of the global economy. Coal is the source of approximately 40 percent of the world’s electricity, and it provides needed energy for millions of people throughout the world. In many regions, there are serious technological impediments to transitioning away from coal. In addition, coal is used in the production of other products, such as cement and steel, which are central to the economies of both developed and developing countries. The comparison to tobacco is instructive. Unlike tobacco, which arguably has no social value, a cessation of the production and use of coal would itself create significant economic and social harm to countless communities across the globe.

The letter riffs on many of the same ideas expressed in the letter written by the president of Harvard, Drew Gilpin Faust, last month: Divestment won’t change anything; the school helps out the environment in other ways (research and recycling).

But Paxson’s statement is simultaneously more supportive of the climate cause — “There is no question in my mind that human-caused environmental change and the threat it poses to sustaining life on earth is among the most pressing issues of our time” — and more harshly dismissive:

Brown has a responsibility to grapple with the world’s problems in all their complexity. As I and others considered the matter, it became apparent that the symbolic statement of divestiture would not elucidate the complex scientific and policy issues surrounding coal and climate change and, for this reason, it would run counter to Brown’s mission of communicating knowledge.

Welcome to life as a student activist. Bob Massie, now CEO of the New Economy Institute, was once a young anti-apartheid activist at Princeton, and has worked on integrating investment with social responsibility ever since. Trying to persuade your college to adjust its investment portfolio on moral grounds is, he says, “an incredible education. But very unfair.”

When you’re a student, Massie says, administrations have two advantages: the advantage of time (wait until the biggest troublemakers graduate), and the advantage of mystifying terminology. “People use the term ‘fiduciary duty’ when they’re talking to you,” he says, “like it’s a Harry Potter paralyzing spell.”

Bishop has indeed already graduated, though for now she’s still working at a lab on campus. She can’t remember a time when she didn’t know about the existence of climate change. “It’s so daunting of a future,” she says. “Until this year I saw my power as very limited. Divestment brought the  enormity of that down into the realm of the manageable.”

“We’ll get there,” she says. “We need to work within and demand that the system change at the same time.”