California took a giant step to fight climate change last week, passing ambitious legislation to slash its greenhouse gas emissions. Hailed as world-leading, historic, and other excited adjectives, it sets a goal of cutting emissions below 1990 levels by 2030.

If you know about this triple-dog-dare legislation that Gov. Jerry Brown signed into law, you’ve probably heard that it’s not only going to continue California’s tradition of feeling smug about how green it is compared to other states, it’s going to usher in a glorious new era of renewable energy innovation. Maybe you also heard that it’s further proof that Californians are crazy, because the state is just too big, hot, and suburban to meet such a formidable challenge.

The thing is, both of these statements may be true. The state had already passed a slightly less ambitious carbon-cutting plan in 2006, targeting 1990 levels by 2020. And California hasn’t hit that goal yet.

Is the state’s climate policy working? Are the new goals realistic? Can it survive political attacks? Is this whole thing equitable? So many important questions! We have answers. Here’s a short primer to help you understand the state’s carbon-cutting plans.

Brown effectively doubled down on the state’s climate targets. That raises the question: Is the previous plan working?

“We’re always hearing from California that we are leaders in carbon-dioxide emissions and that we’ve  been leading the U.S. as a whole in policy making,” says James Sweeney, director of the Precourt Energy Efficiency Center at Stanford University. “But as a whole, our greenhouse gas emissions have been lowering at about the same rate as the U.S.”

Sweeney made the following graph to show what he’s talking about. It’s good for comparing rates of change, and bad for comparing absolute numbers. At first glance, it looks like California is — absurdly — emitting more than the U.S. as a whole. The point here is that, since 2000, the emissions of both have risen and fallen at about the same rate. 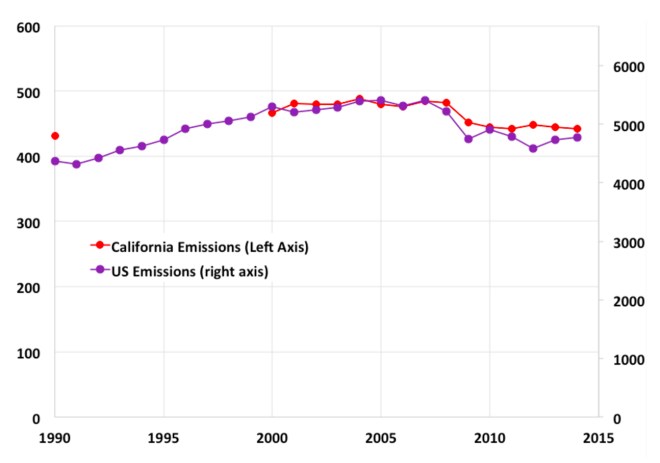 California’s relative averageness is a problem for champions of its climate policy. Are the state’s rules having any effect?

They are, but here’s the thing: Other states have managed deep cuts in emissions by switching from coal to natural gas plants. California was already pretty green to start. It had low-carbon hydroelectricity, cleaner industry, and mild weather, so most of the low-hanging fruit was already picked.

It didn’t help California when drought sapped its hydropower capacity, or when one of the state’s last two nuclear power plants shut down in 2012. “A bunch of dirty power plants were turned on to replace that,” said Greg Dalton, founder of the California climate symposium Climate One. 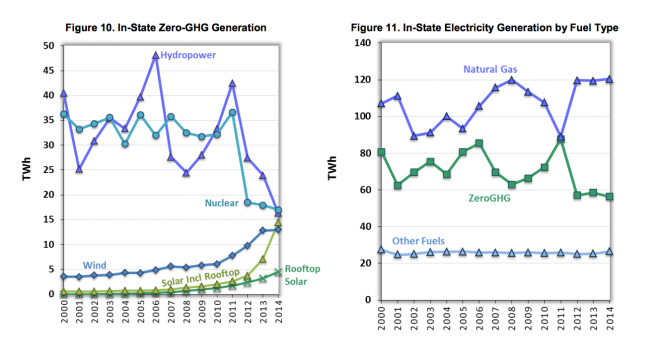 Dalton also points out that the climate plan, though a decade old, took a while to overcome early obstacles. In the beginning it was slowed by lawsuits, and regulators had to produce reams of documents to figure out how to count carbon. The state only recently phased in its regulations for gasoline, and it’s just starting to look at agriculture.

So the state could pick up momentum and make bigger reductions. Still, California has now said it will drive down emissions much faster than the rest of the United States, and it’s never done that before.

California had already committed to bringing its emissions down to 1990 levels by 2020. It’s looking like the state will hit that target, said Alvar Escriva-Bou, a research fellow at the Public Policy Institute of California. But the new law sets a much more ambitious goal. Can it get there?

It’s possible in theory, according to a model created by Jeffrey Greenblatt of Berkeley Lab. As you can see in this graph from that model, California could dip under its 2030 emission target if it follows the green path: 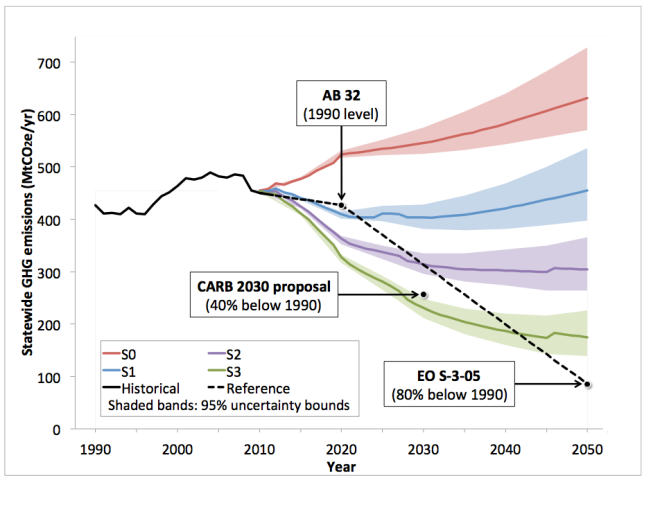 But at the moment, it seems California is following the blue path. To get to that “S3” green curve, the state would need to keep its last remaining nuclear power plant running until 2045 (it’s scheduled to shut down in 2025), build 3 gigawatts of batteries and power storage (way more than currently planned), replace 30 percent of gasoline with low-carbon biofuel (still unclear if that will be viable), and do a bunch of other equally tough stuff. If California makes this happen, the state will look very different 15 years from now.

Some 70 percent of Californians support the state’s climate regulations. And the rules are not only popular, they are durable. At the depths of the last recession, voters handily defeated a measure that would have suspended regulations until California’s unemployment numbers improved.

The laws don’t appear to have hindered the economy. When California was phasing in transportation fuel rules that increased gas prices about 10 cents a gallon, critics predicted chaos breaking loose at gas stations. “But no one really noticed,” Dalton said.

The policy has survived multiple legal attacks. There’s currently another lawsuit pending against it, and the legislature will need to pass more supporting laws, but if past is prologue California is likely to push past these challenges.

Some Democrats and social justice advocates point out that the climate policy could hurt poor people and minorities because it has raised the price of electricity and fuel while allowing pollution to continue in black and Latino neighborhoods.

California’s policy relies on a cap-and-trade system that requires  businesses to clean up their dirty facilities, or keep polluting and buy climate credits to spur emissions reductions elsewhere. That’s the economically efficient way, but it doesn’t help the people who live downwind of a polluting plant and inhale lungfuls of particulate matter often released with carbon. Brentin Mock at City Lab highlights the body of research, including the graph below, that suggests plants are more likely to keep polluting if they are surrounded by non-white people. 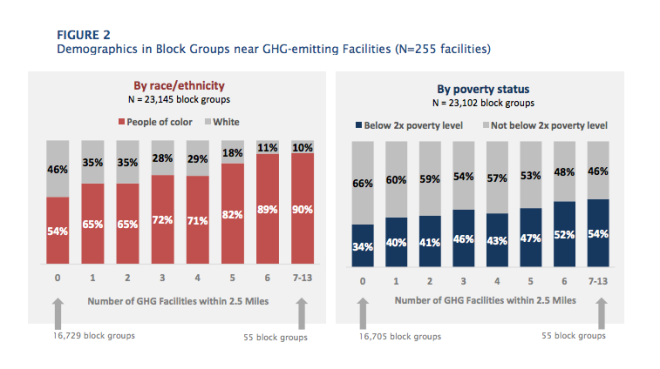 To address this environmental-justice problem, the legislature has introduced a new provision that directs regulators to crack down on specific polluters. Until now, regulators had just laid out the rules and then stepped back to let the market sort out a response. This new law would allow the government to step in and say, “This facility in this particular neighborhood has to install better filters.”

Of course, concern is not limited to the left. Politicians on both sides of the aisle understand that if regulations become too onerous they would push industry out of the state. Environmentalists share this concern: The policy won’t be a success if it just shifts greenhouse gas production out of state.

Some countries have lowered their emissions by moving manufacturing abroad — the industry and the pollution winds up in poorer countries. That’s a pretty terrible way to reduce carbon because it hurts the economy, dumps pollution on people with fewer resources (though they also get some jobs), and does nothing to slow climate change.

So California is trying to push industries, but not so hard that industries pack up their factories and move them to China. There’s a vigorous ongoing debate over how much the regulations are affecting the economy and the environment (a version of this debate is planned for Sept. 20).

So far California’s manufacturing sector has remained fairly steady as the climate policies have phased in. And the example of Sweden, shows that you can successfully slash emissions while industry grows.

All in all, California’s new climate law is cause for both alarm and celebration. The reality is that California, and the rest of the world, need to clear a bar this high. It’s just what needs to be done. It’s only “ambitious” because the goal is so far out of reach.

A goal this ambitious shows just how far away American cities actually are from cutting carbon emissions to a level that will protect them in the long run. The good news is, now that California is trying to do this impossible-seeming thing, it just might figure it out.