When I first looked at the environmental impact of corn ethanol I thought it was simple: Grow an acre of corn for fuel and it means you have to grow another acre elsewhere for food, which ultimately means cutting down forests and releasing a lot of carbon into the atmosphere. Plus, even the EPA said it was worse than oil. Then I dug a little deeper, and realized it might not be as simple as it looked, and that the EPA estimates were rough and out of date. I promised to figure it out and report back.

When I presented Dan Kammen, a respected renewable energy researcher, with my initial indictment of ethanol, he told me, “You almost can’t be wrong, but you almost can’t be right.” That’s because it all comes down to indirect cause and effect, linked only by the action of the market’s invisible hand: A farmer in Iowa opts to grow corn two seasons in a row, rather than alternating corn and soy beans; at the same time, a farmer in the Brazilian Cerrado plows a new field for soy. Did one cause the other? The researchers I like to call the “high counters” say yes, probably. The “low counters” say probably not. And, as the authors of this paper put it: “Unfortunately, neither of these perspectives can be proved incorrect.”

I want to assure you though, that this isn’t a Schrödinger’s cat situation, where the truth is unknowable. Reading this post won’t leave you knowing less than when you started. The question “is ethanol always terrible/great?” is too broad to answer definitively, but we can narrow it down. If we are asking about massively expanding biofuel production to replace fossil fuels, then the high counters are clearly correct: That would cause deforestation and climate disaster. If, on the other hand, we are just asking about maintaining the corn ethanol production we have today, that’s probably a good thing, producing about 20 percent less emissions than switching back to oil.

That’s the conclusion Jeremy Martin, senior researcher at the Union of Concerned Scientists, came to in a new report on transportation fuels. Martin is careful to point out that there are other problems associated with corn production that aren’t captured by the measurement of carbon — algae blooms from nutrient run off, erosion, and habitat loss. Still, the U.S. consumed 13 billion gallons of ethanol in 2014. A 20 percent reduction in the greenhouse gas intensity in all that fuel is significant.

Scientists and policy wonks have been telling each other they are dead wrong about ethanol for more than a decade. Kammen started out on the pro-ethanol side: His lab published a paper in 2006 suggesting corn ethanol was better than fossil fuels. But then, in 2008, a pair of papers pointed out that any analysis of ethanol had to consider indirect land-use change. If growing corn for ethanol in Iowa meant that farmers had to convert more land into fields, that would completely wipe out the benefit of ethanol. In 2010, a group of researchers, including Kammen, did another accounting — this time including the effect of land-use change — and they concluded that ethanol’s carbon footprint is the same as gasoline, or larger.

Researchers are still volleying claims and counter claims back and forth. Kammen told me that it’s not because anyone is blind to the truth, or corrupt; they simply have deep differences in the way they model emissions and land-use change. It’s like the debate over the different models of the atom, he said. New evidence helps refine those models, or suggests new ones, but we still don’t have a perfect model.

Witness, for instance, the chain reaction set off when the U.S. Department of Energy’s Argonne National Lab responded to one of those seminal 2008 papers: It sparked this follow-up from Princeton’s Tim Searchinger, to which Argonne in turn responded, prompting this rebuttal by Searchinger. That may look like an academic cage-match, but it’s all in the interests of science: The criticism allows researchers to make their models better.

By now, Martin told me, “Most lifecycle analyses of biofuel incorporate this concept of indirect land-use change,” and researchers have been refining techniques to capture every bit of greenhouse gas emitted in the fuel production process. He was impressed by the California Air Resource Board’s assessment of ethanol. Determining California’s Low Carbon Fuel Standard was a five-year process of listening to researchers from all across the spectrum, convening expert work groups, and finally putting the information together with state of the art science. “It’s quite a reasonable representation of the way things stand today,” he said. That representation suggests that, even if we  include the impact of indirect land-use change, the corn ethanol mixed with our gasoline today has 20 percent less greenhouse-gas impact than oil.

How can you grow more corn without plowing new land?

The argument that initially sold me on the notion that corn ethanol was an automatic loser was this: If you dedicate land to grow fuel that means you’ve got to grow food elsewhere, and ultimately you will end up displacing plants that are already capturing carbon.

So how can biofuels get around that? By increasing yields, and displacing meat production.

First, yields: If you grow a crop of corn that displaces an identical crop of corn there’s clearly no benefit — each sucks the same amount of carbon dioxide out of the air. But, if you take land that was producing, say, hay, and replace it with thick corn in the summer and then winter wheat that same year, you are producing a lot more vegetation, which sucks up a lot more carbon dioxide. All of that is happening against a background trend of increasing yields as farmers come up with new techniques and better technology. 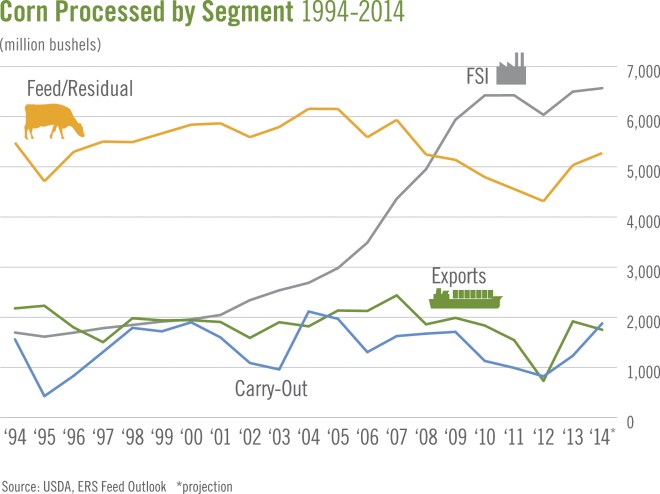 Ethanol is responsible for the big shift of the grey line in the mid 2000s.

Second, meat production: It sounds crazy to say that people will just eat less as biofuel production claims more land … unless you know that the majority of that land was producing food for animals. As ethanol production ramped up, it drove up the price of feed, which drove up the price of meat, and — though there may have been other causes as well — Americans cut back on eating animals.

If you look at the big picture, farmers have increased the amount of corn that they grow, but there’s been a longterm decrease in other crops, and across the U.S. the total amount of farmland hasn’t changed much. 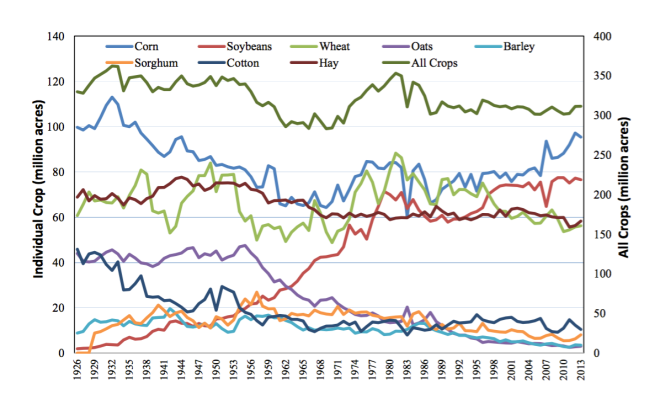 Of course, this is happening in different places — the ethanol boom led farmers in the Midwest to plow up a lot of environmentally sensitive land, at the same time that land in the Northeast and South was moving out of agricultural production entirely.

That’s just in the U.S. — but we also have to ask if other countries are plowing more land to grow cotton and wheat as we dedicate less land for those crops here. Again, though there has been a tragic amount of forest cut down for agriculture in places like Indonesia and tropical West Africa, other areas are reforesting, and the total amount of cropland worldwide is just about flat.

If we tried to grow a lot more ethanol right away then farmers would convert land to agriculture — there’s no doubt about that. But it’s another thing to ask what happens if we stopped growing ethanol corn. Would farmers in Iowa convert their fields to tallgrass prairie? Perhaps some, but it seems more likely that they’d grow livestock feed. Continuing — as opposed to increasing — the production of ethanol shouldn’t cause more land conversion to agriculture.

Whether you are a high-counter who thinks corn ethanol is terrible, or a low-counter who thinks it’s great, it’s here to stay. Today, 10 percent of the gas going into our cars is ethanol, and even if lawmakers repealed the Renewable Fuel Standard — which mandates that we mix that 10 percent into our gas — the percentage wouldn’t drop. That’s because refiners have come to rely on ethanol to raise the octane of gasoline. As NPR reporter Dan Charles explains:

Octane is a measure of gasoline’s tendency to ignite under pressure. If it’s too low, the gasoline/air mixture in an engine’s cylinders will burn too soon, creating damaging “knocking.”

The industry standard for gasoline is 87. But getting gasoline’s octane rating up to that standard costs money. It means more refining of the petroleum, or using high-octane compounds in your gasoline formula, such as — you guessed it — ethanol. So gasoline companies aren’t using ethanol for its energy — they’re buying it for its high octane rating.

You could also use lead to boost octane, but we decided against that after figuring out that it’s a serious poison. You could use methyl-tertiary butyl ether (MTBE), but we ditched that in the 1990s because it seemed to be contaminating groundwater. Finally, you could build more complex refineries to process oil until reaches a higher octane without ethanol. But that would be expensive, Martin told me, and it’s not likely to happen anytime soon.

At this point, Martin said, there is no reason to end the Renewable Fuel Standard: There’s demand for corn ethanol even without the government mandate, so the ethanol-haters wouldn’t get their wish even if you repealed the rule. In addition, the Renewable Fuel Standard creates a huge incentive for people to figure out how to mass-produce cellulosic ethanol. “As more advanced cellulosic ethanol becomes available there’s a market for it,” he said. If that happens, farmers really could convert cornfields to tall-grass prairie, then cut the grass and turn it into fuel.

So it looks like corn ethanol is much more legitimate than I initially thought, and the measurement of its carbon intensity more complicated. I should have interviewed more experts and read more up-to-date science before publishing that first piece.

The Road to Knowledge — at least in my case — often winds through the Valley of Ignorance. I never know exactly where I am along that road, but I do keep walking.

A talking cure for climate-based depression? It worked for Renee Lertzman