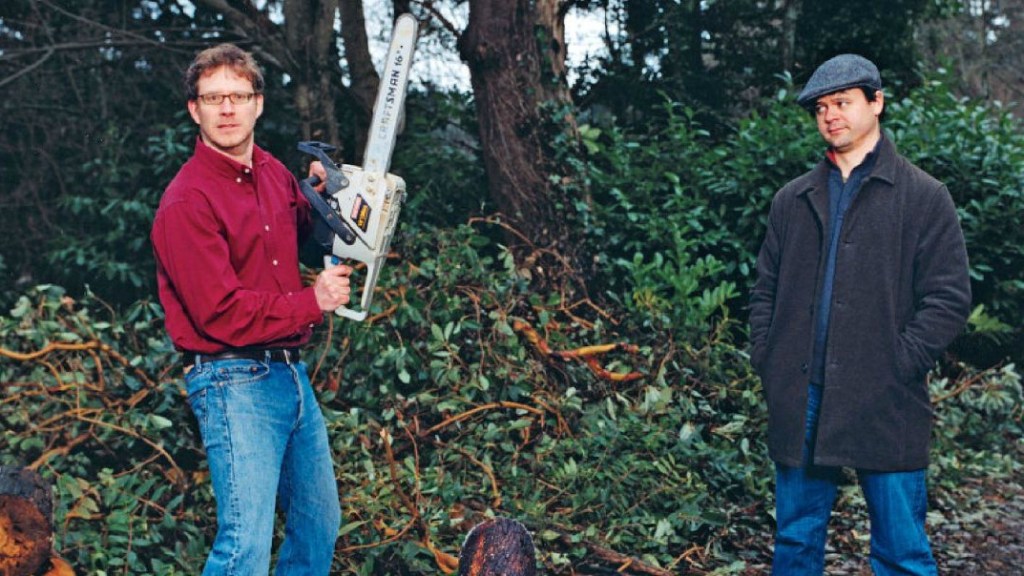 Me and Beardless David, back in the day. John Clark/Outside Magazine
Climate & Energy

It is with great sadness but also no small degree of pride that I’m writing to share the news that David Roberts will be leaving Team Grist shortly to join Vox.

Where to begin about David? Maybe at the start … When he applied to be a news writer at Grist in 2003, he didn’t know much about climate change or any issues we covered — i.e., he was a philosophy grad who used to write movie reviews for IMDb — but he definitely knew news and he definitely knew how to write, so we took a chance on him. (It didn’t hurt that he tried to bribe us with a grapefruit slicer at his interview, right in the middle of our grapefruit-themed reader fundraiser.)

In short order, David took over our news report and made what had been nominally funny and informative into something that was truly hilarious and smart. And then he began to do other things — started our first blog; launched a weekly compilation of laugh-out-loud pop-culture tidbits; wrote many special series on topics like the environment and religion. At some point, David began to blog for us full-time — and it was here he found his metier. Over time, he became a prominent political voice on the internet, writing about climate and energy, yes, but also about broader policy and political trends, and doing it in a way that spoke to both normal (well, semi-normal) people as well as those of you engaged with our issues in the policy and advocacy trenches. (He even introduced the term climate hawk into the zeitgeist.) In 2009, we dragged David onto Twitter; little did we know what that would lead to — 99.1K tweets and counting (and the need to take a sabbatical to detox four and a half years later).

Along the way, with his original thinking, his ability to look well beyond the daily news to describe what really mattered today and what would really matter tomorrow, his passion to push our country from a path of destruction toward a future that makes sense, and, yeah, his wit, David became, as a top Obama official once told me, “a national treasure.” I was always proud he was our treasure to share with the world; now that he is leaving our midst, I’m proud and excited that many others will learn from, admire, and be entertained by his work. It’s all part of Grist’s plan for smart thinking about climate and energy to become the norm and join the mainstream!

David will share more details about his coming adventure — and he intends to go out with a bang on our site. Over on Vox, grandmaster Ezra Klein has an announcement about David’s imminent arrival. Meanwhile, never fear, we Gristers have plans in the works to fill the gap that David’s departure creates. That’s for the future, though. With this post, I wanted to celebrate David’s achievements and wish him well. And, why yes, I am expecting him to hit 100K tweets before he leaves.