The outlook for coal — especially thermal coal, the kind used to make electricity — is increasingly grim. Developed countries are seeing flat demand and rapid shifts to natural gas and renewables. Several western investment banks are shifting their funding to renewables. Developing-world demand is still on the rise, but China, which has single-handedly supported coal export markets for over a decade, is planning to cap its use of coal and vastly increase its use of renewable energy by 2020. Banking giant Goldman-Sachs has warned of a rapidly closing window for profitable thermal coal projects; “most thermal coal growth projects will struggle to earn a positive return for their owners,” it says.

Naturally, Big Coal is desperate to halt its decline. And as the largest privately owned coal company in the world, one of the few big energy players devoted solely to coal, Peabody Energy is the most desperate of all. Here’s Peabody’s stock over the last five years:

The epic China coal/growth rush peaked in 2011 and the company’s stock price has been going downhill ever since, recently breaching the previously unthinkable $10 mark.

The company’s poor performance recently got it booted from the S&P 500 index. According to its Z Score (don’t ask), Peabody now has a higher than 50 percent chance of going bankrupt in the next two years. Analysts are asking, “Is It Too Late For Peabody Energy?”

Peabody has hit on a novel strategy: It is trying to position itself as a savior of the global poor. In its Advanced Energy for Life PR campaign, it claims that coal is the only thing that can fuel economic growth and reduce energy poverty. The implied corollary: Any country that tries to restrict the use, import, or export of coal is basically killing poor children.

At the recent meeting of the G20, where Peabody lobbied world leaders to use more coal, the company’s CEO claimed that a half-million people had supported its “Lights On” campaign through social media.

The Lights On campaign doesn’t actually do anything to alleviate energy poverty. It advocates for coal, the way “got milk?” advocates for milk or “just do it” advocates for Nike. Does that sound like something a half-million people would sign up for in such a short time? When so many comments on its social media posts are negative? The sudden, massive uptick in “likes” has all the marks of a pay-per-care campaign, wherein companies can buy large bundles of likes to create the impression of popular support. (Here’s a detailed case that much of the support was purchased, from Tcktcktck.)

Hiring Big Tobacco’s PR firm and buying a bunch of likes seems a dubious way to signal one’s concern for the global poor.

Nevertheless, energy poverty is a real problem. What is Peabody doing to solve it?

As it happens, the Australia Institute has done some digging on what coal companies are doing about energy poverty; it issued a report last month. The finding on Peabody:

Based on the [Advanced Energy for Life] website, Peabody’s reports and multiple attempts to contact the company and site administrators, it appears that the site does not conduct any original research or analysis or have any direct involvement in energy poverty alleviation projects.

Peabody spends about $5 million a year (“0.07 per cent of their USD$7 billion in revenue”) on charity — none of it on energy-poverty programs. Peabody’s opposition to energy poverty is apparently coextensive with its lobbying for its own product.

Other big coal companies do spend money on energy-poverty programs. The twist: none of those programs use coal to alleviate energy poverty. Instead, they use distributed energy like solar panels, solar ovens, and fuel cells.

What about Peabody’s argument that only coal can drive economic growth and lift people out of poverty?

I covered the energy-poverty question in two previous posts so I won’t go over the whole terrain again. The main thing is that solving energy poverty (and more broadly, driving economic growth in the developing world) with fossil fuels would be futile. As the World Bank’s grim report of a couple years ago showed, progress toward ending poverty could be stalled or reversed by unmitigated climate damages. Development and sustainability are now one and the same. 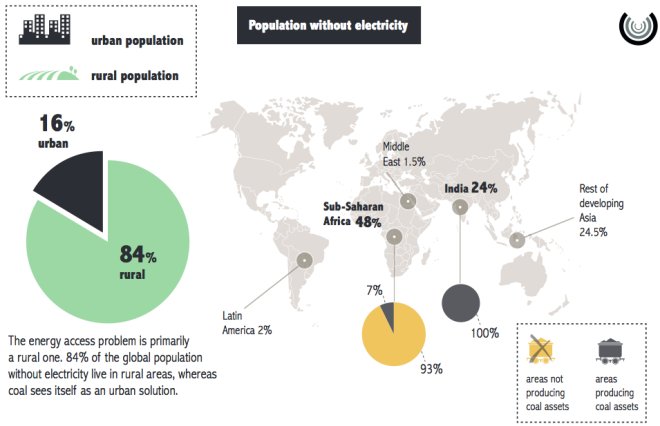 Carbon Tracker Initiative, “Energy Access: why coal is not the way out of energy poverty”

Coal power is “cheap” primarily when fed into an existing grid. If you add the cost of extending the grid to rural households, the power becomes substantially pricier: 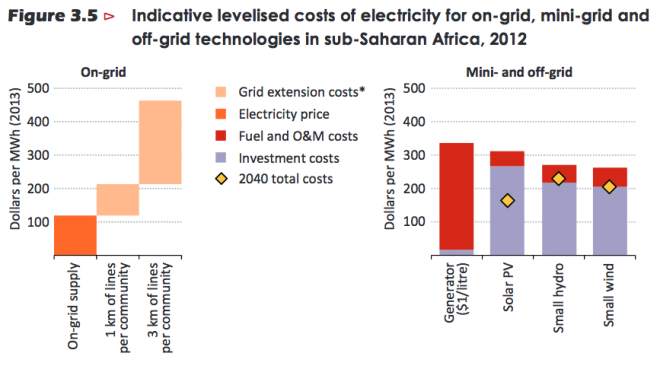 As you can see, electricity from the grid is considerably cheaper than mini- and off-grid options — until you’re more than a kilometer or two from the grid, at which point grid extension wipes out the cost differential. That’s why when mega-coal plants do get built, the power often goes to already-connected commercial and industrial users first. For utilities, there’s not much money to be made extending the grid to poor households.

Speaking of grids, the Vasudha Foundation recently issued a report on energy poverty called “Electricity for All in India.” Among other things, it describes the abysmal state of the Indian grid, which boasts some of the highest transmission and distribution (T&D) line losses in the world. Around a quarter of all electricity generated is lost; hard to see how new coal plants will solve that.

Also, the regions in India with the most coal plants also have some the poorest residents and the worst energy access. Hard to see how new coal plants will solve that either.

One of the American communities hardest hit by coal is the Navajo Nation, a 27,000-square-mile reservation in the Southwest. Coal is dug up from Navajo land and burned in an adjacent coal plant. In true resource-curse fashion, the coal industry has so colonized the land that there are virtually no other jobs to be had.

The power from the coal plant mostly goes to growing Sunbelt cities; the pollution stays at home, leaving the Navajo with degraded land, high poverty, poor health, and some 15,000 Navajo homes without electricity. Who owns the mines that dot this landscape of poverty? Peabody Energy. If the company is genuinely devoted to ending energy poverty, perhaps it could get started in its own backyard.

The Supreme Court has no time for BP’s BS