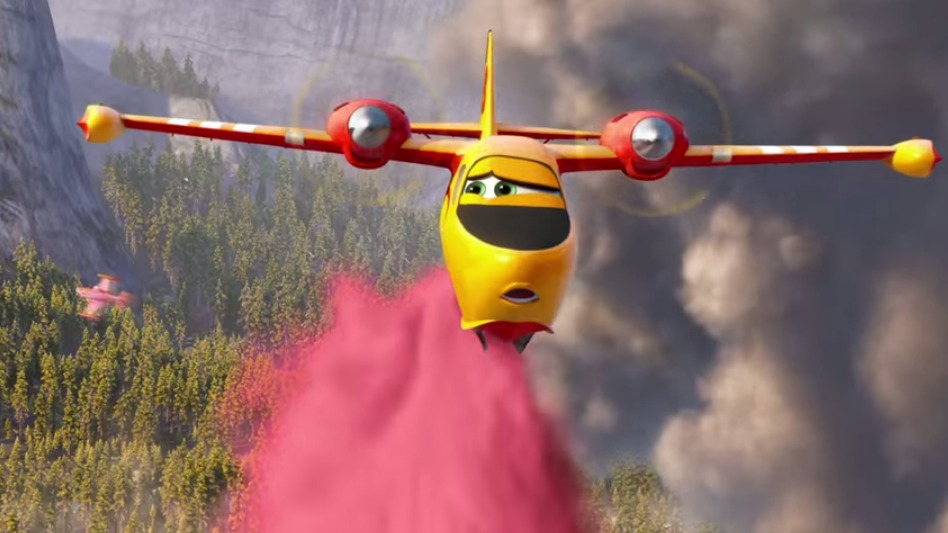 I saw the Disney film Planes: Fire and Rescue over the weekend with my 11-year-old son Justice. It’s not my favorite animated movie series, but I thought it would be a calmer, more ambient version of the kind of anthropomorphized stories Justice and I have sat earmuffed through at the movies lately, like Transformers and Planet of the Apes.

I’m not mad we went. It did a better job of explaining the inconsolable wrath of wildfires for us two East Coasters than I could have ever done for my son. And it managed to pack in a subplot about water scarcity.

Spoiler alert here — and sorry, because I know y’all have been dying to see this sequel.

Dusty Crophopper, a small-farm, single-propeller cropduster returns from his main character role in the original, where he left the farm to become a Top Gun prize racer. But in Fire & Rescue, we learn that his streak of world championship racing and fancy globetrotting have grinded his gears irreparably, meaning he can no longer race.

Enraged that he has to hang it up, Dusty accidentally causes a five-alarm blaze at his home hanger that’s not easily put to bed by the old resident fire truck. An ensuing investigation into the conflagration reveals that the hangar is out of compliance with a bunch of safety codes and regulations. It must be shut down unless the local fire unit makes significant upgrades (Big Government ruins the day once again! Thanks, Obama!).

It’s here that Dusty decides he wants to enlist with an elite squad of planes, trucks, and other motorized, vocalized equipment trained specifically for dealing with the worst of disasters, so he can help save his town. Dusty’s training days involve helping the squad find creative ways to fight a rash of wildfires occurring all over their terrain. We never learn the cause of the fires; they just happen. The story’s major function is to show the audience just how difficult it is to put these forest fires out.

But the real tension kicks in when a major conflict of agendas breaks out between a national park superintendent and the disaster squad over water usage. The demanding superintendent insists on using the water for the grand opening of a huge tourist lodge resort, built deep in the woods of the national park he oversees. He wants to impress the Secretary of the Interior department, who’s making a guest visit for the opening.

When yet another forest fire breaks out near the lodge, the disaster unit doesn’t have the water it needs because it’s all been diverted to the resort. This diversion puts the Interior Secretary, along with hundreds of visitors present for opening day at the lodge, in grave danger — saved only, of course, when our hero Dusty finds a way to secure water from the river to help rescue them.

I imagine Tea Party dads will use this story to drive a point through about the federal government being clueless. The National Park Service gets a good kick in the butt in this film as well. But I think the discussion that Planes surfaces around water resources — who decides how they are used, how and why — are important ones to have, and at an early age. It was the part that got my greatest attention.

If climate change is a thing in the movie, it serves more as a watermark. As with Snowpiercer, the science behind what’s causing the disasters is never explored; they are just facts of life in the story.

Some parents will use this as an opening into climate talks with their kids. Some of the Tea Partiers might probably just tell the kids that this is what happens when Smokey Bear goes into the woods to smoke weed with the hippies. But paired with other accessible shows like Showtime’s Years of Living Dangerously or Cosmos, kids can walk away with a good sense of how exactly climate change might impact their own backyards, and the difficult choices we need to make about how to deploy resources both before and when they happen.