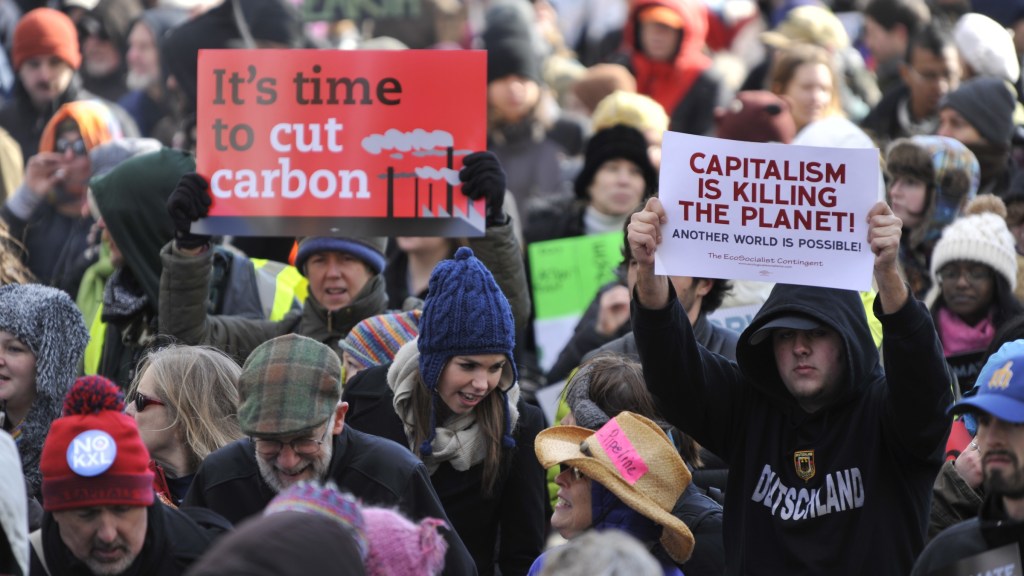 Le dérèglement climatique tue, proclaims a new campaign. “Climate change kills.” It’s the message being pushed in a new essay collection by the likes of Naomi Klein, Vandana Shiva, Bill McKibben, and Desmond Tutu — a book that seeks to inspire ambitious civil action before the U.N. climate negotiations in Paris this December. The collection, called Stop Climate Crimes!, features a joint statement signed by these high-profile characters and others, including Vivienne Westwood and Noam Chomsky.

“In the past, determined women and men have resisted and overcome the crimes of slavery, totalitarianism, colonialism or apartheid,” reads the statement. “They decided to fight for justice and solidarity and knew no one would do it for them. Climate change is a similar challenge, and we are nurturing a similar uprising.” The signatories are expected to issue an official call to action on Thursday, components of which could include calls for large street protests in Paris during the climate negotiations.

Bill McKibben, founder of environmental movement 350.org, which has launched the project with the anti-globalisation organisation Attac France, described the move as a “good first step” towards Paris.

“It’s important for everyone to know that the players at Paris aren’t just government officials and their industry sidekicks. Civil society is going to have its say, and noisily if need be. This is a good first step,” he said.

There are now less than 100 days until the UN’s Conference of the Parties (COP21) in Paris, where leaders from more than 190 countries will gather to discuss a potential new agreement on climate change. Last week the EU’s climate commissioner Miguel Arias Cañete warned that negotiations ahead of the conference must accelerate if any agreement is to be meaningful.

The statement demands an end to fossil fuel subsidies and the freezing of fossil fuel extraction. It also singles out trade liberalization and emission-heavy corporations as instrumental in causing the world’s climate woes. The statement and book constitute a portion of Attac France’s “Let’s change the system, not the climate” campaign, an anti-globalization effort that seeks to mobilize citizens against free trade initiatives in favor of climate security.

Of course, drastically altering our consumption habits and corporate power structures is a tall order. “We know that this implies a great historical shift,” the signatories state. But their call is steadfast. “We will not wait for states to make it happen. Slavery and apartheid did not end because states decided to abolish them. Mass mobilisations left political leaders no other choice.” As some would say, it’s a move that requires changing everything.