French authorities near decision about whether to allow climate rallies 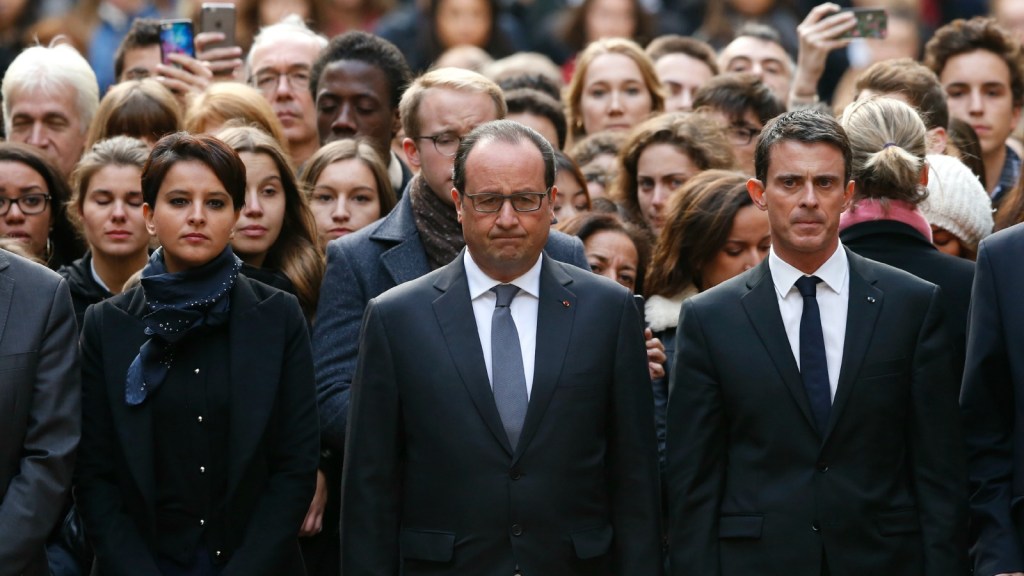 French President Francois Hollande flanked by officials and students as they observe a moment of silence to pay tribute to victims of Friday's attacks. Reuters / POOL New
Climate & Energy

French authorities near decision about whether to allow climate rallies

We learned Monday that even after Friday’s terrorist attacks that killed 129 people in Paris, global warming activists are pushing to go ahead with large protests and civil disobedience in the French capital two weeks from now.

On Tuesday morning, Paris time, representatives of a coalition of 130 environmental groups met with French Foreign Minister Laurent Fabius to argue that the rallies should be allowed to take place alongside the upcoming U.N. climate summit — and to hear the government’s security concerns. The climate negotiations “cannot take place without the participation or without the mobilizations of civil society in France,” read a statement released yesterday by Coalition Climat 21, an umbrella group of activists.

But even after the meeting this morning, there remains plenty of doubt about which events will be canceled and which will be permitted to take place. Paris remains under a state of emergency, and French President Francois Hollande has said parliament should extend that state of emergency for another three months.

Jamie Henn, a spokesperson for the U.S.-based environmental group 350.org, told me Tuesday morning that the French authorities are nearing a decision on the main climate march, which had been scheduled to take place in the streets of Paris on Nov. 29, the evening before the summit opens. That permitting decision, he says, should come from the French government either Wednesday or Thursday. “The coalition is pushing hard for it to move forward if safety can be maintained,” Henn said. Organizers had expected to draw around 200,000 to the rally, according to Reuters. Coordinated climate rallies in cities around the world are expected to continue.

“We’re still waiting for the French authorities to tell us if they think the march in Paris, and other mobilization moments around the climate talks, can be made safe and secure,” said Jean-François Julliard, executive director for Greenpeace in France, according to a statement. “Huge numbers are predicted for the Paris gathering. We at Greenpeace want it to happen.”

But additional protests in Paris, such as plans to block roads and form human chains at the Place de la République, scheduled for Dec. 12, “are still under negotiation,” Henn said.

One thing we do know: The large exhibition pavilion set up by the U.N. at the site of the summit for environmental groups, observers, and the general public — called the Climate Generations space — will be maintained, “but maybe with new access rules,” Henn said.