“If you care about low-income, minority communities, start protecting the air that they breathe.” President Obama’s remarks about his newly finalized Clean Power Plan (CPP) resonated with me as I sat in the East Room of the White House last week.

In many low-income communities and communities of color, breathing is hazardous to your health because of high levels of air pollution — a legacy of the environmental racism that exists in our country. That simple idea expressed by the president has been the driving force behind the work of environmental justice (EJ) advocates for decades. So the moment those words crossed his lips, the East Room erupted — people stood up and cheered for a long time. I let out a sigh of relief and was filled with pride that the voices of environmental justice communities had been heard all the way up to the White House.

I don’t believe that the final Clean Power Plan is perfect, but it’s much improved over the draft plan that was released in June of 2014. There was a dramatic shift in the tone and content, and explicit pieces of the plan now address environmental justice and the concerns of communities on the frontlines of pollution. This shift would not have happened if not for the persistent voices of environmental justice advocates working tirelessly over the past year, in organizations that are understaffed and underfunded.

Members of the Environmental Justice Leadership Forum on Climate Change have engaged in consistent advocacy to demand that equity and justice be embedded in the framework of the final Clean Power Plan, as well as other aspects of the president’s Climate Action Plan. Despite continuous rhetoric from the Koch brothers’ network, the National Black Chamber of Commerce, and others claiming that the CPP would hurt minority communities, we knew that if the final plan were crafted with equity in mind, it could be a huge win for low-income communities and communities of color.

The CPP as initially proposed last year left much to be desired. While the draft plan acknowledged that there would be some communities subjected to more dirty pollution than others as a result of this rule, it did not direct or even encourage the states to address this obvious environmental issue. In addition, it gave states flexibility to choose which techniques they would use to reach their new state emission-reduction goals, including options that often contribute to pollution in low-income communities and communities of color, like cap-and-trade, carbon capture and sequestration, and a reliance on nuclear energy and natural gas.

In an attempt to change these misguided aspects of the draft plan, EJ organizations worked strategically to let EPA know what we felt was best for our communities. Through continuous engagement and collaborations, our voices were heard.

We didn’t get all of the things we asked for — like mandatory emissions reductions in our communities, or the elimination of cap-and-trade as a mitigation option for states — but we did get some of them. The final CPP requires states to engage with overly burdened communities, which we hope will minimize negative impacts from letting states use cap-and-trade, nuclear power, and natural gas to meet their goals.

Here’s a quick overview of some of what we asked for and got: 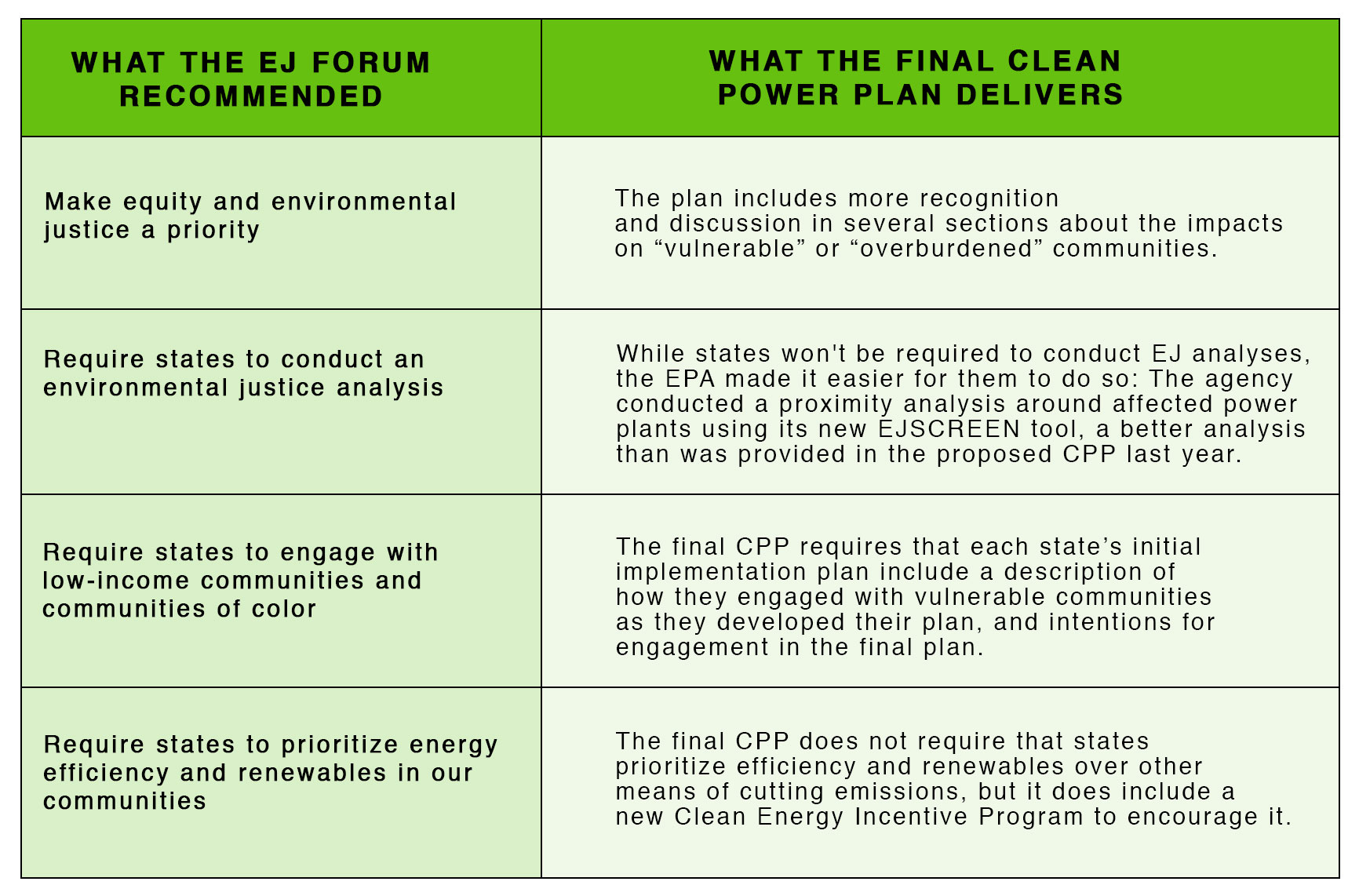 And, strikingly, the total number of times that key environmental justice terms are mentioned in the final plan is significantly greater than in the draft plan:

This is a far cry from what happened in 2009 and 2010 when Congress considered the Waxman-Markey cap-and-trade bill, the last big federal attempt to directly cut CO2 emissions. When that bill was on the table, environmental justice voices were simply left out of the conversation because it was considered “too much of a lift” to include our concerns about the impacts of cap-and-trade on our communities.

It is not time to rest on our laurels or pat ourselves on the back. EJ advocates are already moving to the next stage, engaging with states on the implementation process (see our EJ Tool Kit). We are ready and prepared to work proactively with our local elected officials and state environmental protection departments to ensure that a thorough environmental justice analysis is done in each state.

But we should still celebrate this victory, even though it’s partial. The EPA listened to some of our demands, and that gives us a little leverage as we make those same demands at the state level. No longer can our voices be ignored.

Clean air is our right. So let’s take a deep breath and move on to the next fight.

Jalonne L. White-Newsome is the director of federal policy for WE ACT for Environmental Justice, staffing its Washington, D.C., legislative office.