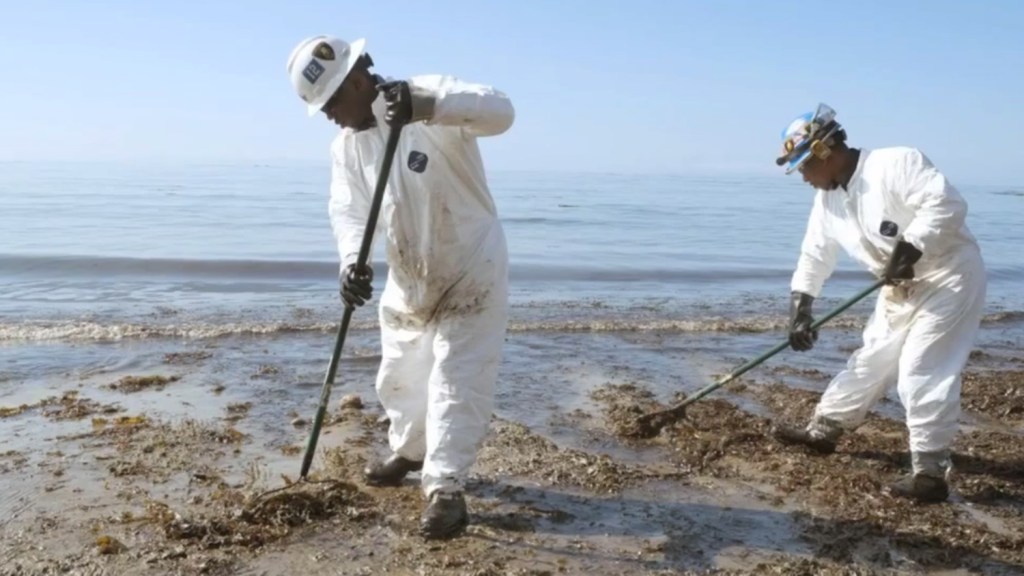 On May 18, over 100,000 gallons of oil gushed onto a nine-mile stretch of California coastline. A buried pipeline ruptured next to a culvert that led to a Santa Barbara beach, sending oil straight into the water. Government officials have closed both Refugio State Beach and El Captain State Beach until early June; it’s the worst oil spill to hit the Santa Barbara coastline since 1969, when 4.2 million gallons of oil slicked the Pacific and helped trigger the modern environmental movement.

This isn’t just any beach. In the Santa Barbara Channel, cold water from the north meets warm water from the south, carrying a mosaic of unusual species. It’s almost Mediterranean, and it’s rare. Off California, massive forests of kelp — the largest type of marine algae — create “this really cool three-dimensional habitat that harbors a lot of biodiversity,” says Bob Miller, a marine biologist at UC Santa Barbara. The seaweed grows up to 130 feet tall and supports more than 800 species, including infant fish and invertebrates like crabs and snails. Bigger marine mammals like sea lions and otters often forage for food through the leaves. When kelp breaks loose and washes up on shore, arthropods and birds eat it. Seagulls, terns, and cormorants forage the beaches. About 19,000 gray whales migrate through the channel this time of year — sometimes as close as 100 feet from shore. And the rocky intertidal areas harbor sea anemones, soft corals, shrimp, muscles, crabs, and small fish.

But oil screws all of that up. It’s viscous, and depending on temperature it either oozes everywhere or sticks to everything.

The 14,000 acres of kelp sprawled around the coast captures big gobs of oil in the canopies, so it settles like a toxic cloud on the algal forests. If little animals eat the oil they either die, or get eaten by bigger animals, spreading the toxic stuff through the food web.

Oil that wave action pushes into the rough terrain of the rocky intertidal zone gets trapped in the natural nooks and small spaces. These crannies are partially isolated, ecologically speaking — that’s why tidepools are so cool. But it also means that when damaged by oil, they can take a much longer time to recover than other marine environments.

Bird species face some of the biggest risks. Foraging on the beach means running into oil that washes up on shore, which is like walking into a tar pit. Brown pelicans — which spent almost 50 years on the the Federal List of Endangered and Threatened Wildlife before being removed in 2009 — dive into the water to hunt for fish, which means they end up diving headfirst into an oil slick.

Hey, at least the plants and animals down on the bottom will be OK, right? Sure! Unless an intensely sunny day — like, you know, California — warms the oil enough that it sinks. That’s what happened after the Exxon Valdez spill in Alaska 25 years ago. People are still digging crude out of sediment from the ocean floor there.

It’s too early to tell exactly what’ll happen off Santa Barbara. Ben Halpern, a marine conservation researcher at UC Santa Barbarba, says the most visible short term effect will bird deaths from eating oil-related chemicals. “It’s clearly a disaster, but it will be relatively contained,” he says. “There will be major impact on the local scale, but not the regional one.” He predicts much of the oil will be cleaned up within a year or two, although there will still be pockets of oil that subsist for many years afterward.

Because many of these toxins directly affect reproductive organs, Miller says to expect a decrease in overall population over the next few generations.

On the slightly brighter (albeit ironic) side, UC Santa Barbara has a killer marine sciences department, and researchers there will be able to use the spill to study how oil affects the biogeochemistry of marine ecosystems. “The spill will actually create opportunities,” Miller says. He’s the head of a program funded by NASA and NOAA to observe and measure marine biodiversity trends in Santa Barbara, and he’s eager to see what they can learn from the spill’s aftermath. Other researchers might try testing oil-eating microbes, or gather data that could help in developing new technologies for cleanup crews.

By the evening of May 21, 17 cleanup vessels managed by the company whose pipeline ruptured — Plains All American Pipeline — had managed to slurped up just about 9,500 gallons. Halpern says he expect the majority of the spill to be cleaned up in a few weeks, just in time for the last grey whale stragglers to make their way through the Santa Barbara Channel.