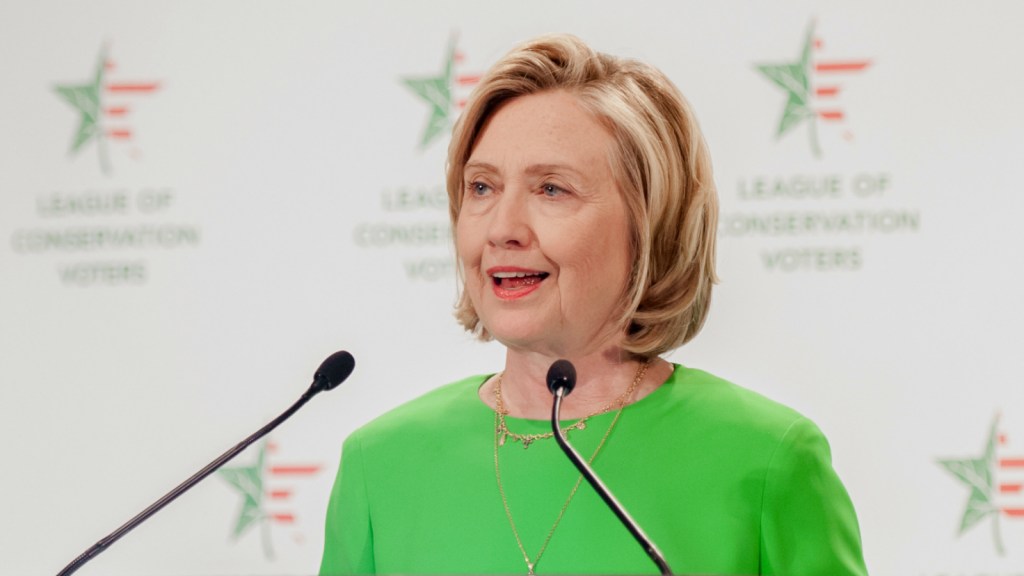 About a month ago, I went to New Hampshire to enthusiastically announce the League of Conservation Voters Action Fund’s endorsement of Hillary Clinton for president. As she received the endorsement, she listed important climate actions that she would take once in the White House: keeping fossil fuels in the ground and under the ocean in places like the Arctic, holding polluters accountable, and pushing an ambitious clean energy agenda that prioritizes low-income communities.

“As President, I will put the Arctic off limits to drilling because I think there are some places where we have to keep fossil fuels in the ground or under the ocean … and we have to get more countries to agree with us: leave it under the ocean.”

“I’m so proud of New York Attorney General Eric Schneiderman, because he announced he’s going to investigate Exxon to get to the bottom of whether they misled the world … It’s a big deal. It is unacceptable for anyone to put the health of our families and our planet at risk by obscuring science.”

“I want to set some big goals for America again. … I believe we can have 500 million more solar panels installed by the end of my first term, and enough renewable electricity to power every home in America within 10 years. I want to make sure every American shares in the benefits of a clean energy future. So that means helping to bring solar and energy efficiency technologies to more low-income communities. I think this is something we don’t talk about enough.” [Emphasis mine.]

Clinton demonstrates exactly the kind of leadership, experience, and passion for the environment we must have in the White House in 2017.

With rising seas, devastating droughts, wildfires, and extreme weather already upon us, the stakes couldn’t be higher. The next president must build on the extensive progress President Obama has made on climate if we are to avoid the worst impacts of climate change. We can’t afford to backpedal on the Obama administration’s landmark achievements, in particular the Clean Power Plan, which is the single largest step our country has ever taken to combat climate change.

Unfortunately, polluters like the Koch brothers, who’ve pledged their pockets will be at least $889 million deep this election cycle, will fund candidates who say outrageous things about climate change, and whose plans for this crisis are to ignore it and continue to cater to their polluter allies. They are going to stop at nothing. The environmental community is strong and will continue to get stronger, but we will still be outspent.

So when it comes to fighting the climate crisis, the stakes couldn’t be higher and the fight couldn’t be harder. We can’t afford to waste any time — we need someone who can both defeat the polluter-backed candidates and who, on day one, can hit the ground running with a domestic and international climate agenda that takes us where we need to go. Losing our momentum on climate is not an option.

That’s why we were thrilled to make this historic endorsement of Hillary Clinton to be the next president of the United States. And that’s why we are starting now. We need to help raise money and build a network of volunteers who will ensure Clinton can continue progress on climate from behind the Resolute Desk.

However, after meeting with all of the candidates and doing extensive research and analysis, we are confident that Clinton is the strongest leader who is best positioned to make the progress we need on the greatest challenge of our time: the climate crisis. Her experience in two administrations, her record of accomplishments on the domestic and international stages, and her effectiveness as a policymaker set her apart.

We proudly endorsed Clinton before a single vote has been cast in the primary election, our earliest endorsement ever, so that we could begin our work on the election in earnest — making sure that acting on climate is a defining issue of this election. Just as we did for months before we endorsed her, we will continue to encourage her to be even more outspoken and ambitious when it comes to fighting climate change.

We applaud the fact that the other Democratic candidates also have very strong records, and we are thrilled that they are all making climate change a centerpiece of their campaigns. But we strongly believe that Hillary Clinton’s vast experience — on the campaign trails, as secretary of state, as a senator, and as the first lady — means that she will be the most effective leader to fight the big polluters and win on climate. Much more about her record can be found here.

Gene Karpinski is president of the League of Conservation Voters Action Fund.