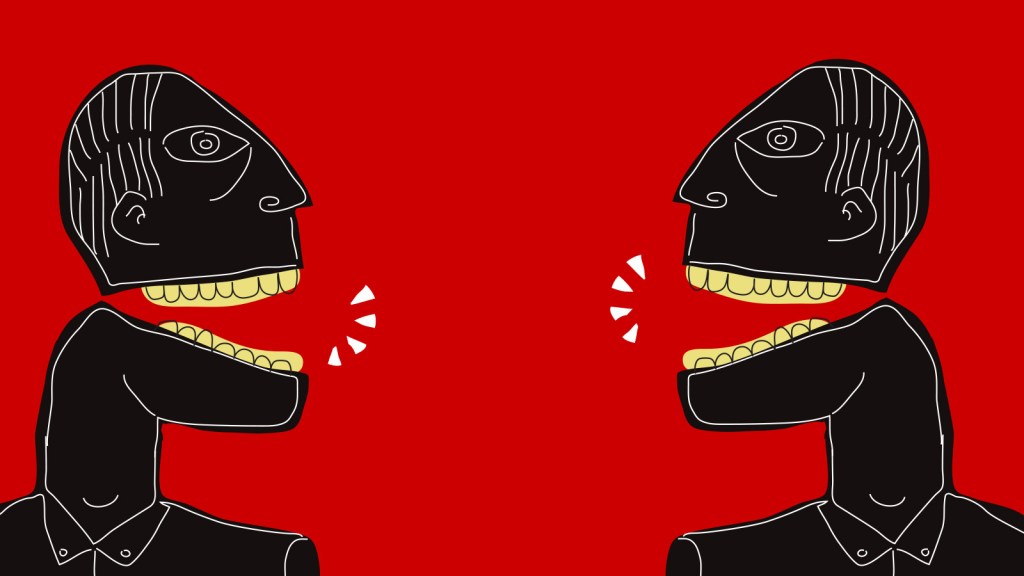 iStockphoto
It’s so wrong, but it feels so right

Have you ever been in a fight with someone who just won’t listen to common sense? Who just refuses to acknowledge the meticulously peer-reviewed authority of your studies and graphs and statistics? If you are used to talking to people about climate change, the answer is probably yes.

This week in the New Yorker, Maria Konnikova writes about research by Dartmouth political scientist Brendan Nyhan, on how to make people change their incorrect beliefs in the face of fact. The short version: Uh, good luck.

The study tracked 2000 families’ beliefs about the safety of vaccine, before and after several different kinds of interventions: Families received pamphlets, some filled with facts about the lack of evidence linking vaccines to diseases like autism, from the Centers for Disease Control; another brochure talked about the dangers of the illnesses vaccines are meant to hold at bay; the other two sets of pamphlets just presented stories about individuals, or dramatic images of what happens when you don’t vaccinate your kids.

The results? Nothing. Or worse: Some families who had already been side-eye-ing vaccinations became even more likely to hunker down in their existing beliefs, in what’s known as “the backfire effect.” In this case, people either distrusted the material even more or else assimilated the fear-inducing pictures and stories about measles and mumps into their existing distaste for vaccines.

Early on in his studies of these kinds of false beliefs, Nyhan realized that when false information is related to someone’s self-identity, it is much more likely to become entrenched than just any random error.

Konnikova and her subject focus mainly on politics and public health issues, but there are plenty of examples of fact-blindness when it comes to climate change. Konnikova drops a mention of one study from 2012, in which researchers gave subjects fake climate news articles to read. Depending on the subject’s political identity, he or she perceived the information differently, even when the article covered relatively neutral ground.

As Grist’s Ben Adler pointed out recently, for conservatives who have built their political identity on smaller government, to admit climate change is a real problem is to admit there’s a chink in the armor of your identity: Climate change simply demands government intervention, and in a big way. And the effect can be as subtle or extreme as one’s political views: As Mother Jones reported on Tuesday, self-identifying Tea Partiers in New Hampshire are twice as likely to distrust environmental science than their less-conservative Republican peers.

There is one ray of hope in this polarized, warming world — a small sign that people are capable of shedding damaging associations of their identity, to focus on the facts in front of them. That hope comes from a technique called “self-affirmation,” which is most often cited as a way to help women and minorities shed unconscious, self-deprecating biases before taking a difficult test. By focusing on their own strengths and past successes beforehand, and shedding the notion that I’m really bad at this, test-takers are more likely to score highly.

How does this apply to convincing people to trust the facts on something like climate change? Well, if we can take the conversation out of the realm of identity politics, then people may be more able to accept objectively what science is telling us. If we can change the terms of the argument from, You’re killing the planet by driving that SUV, to something like, It’s not me vs. you, it’s bigger than both of us, we might just open some minds.

Nyhan uses raw milk as an example — science has shown that unpasteurized dairy is a real public health threat, but raw-milk advocates identify as holistically healthy individuals ready to reap the microbial benefits straight from the cow. So instead of challenging that identity with science on the riskiness of that behavior, it could be more effective to focus on the non-controversial track record of pasteurized milk. (Nyhan’s group will be publishing the results of s study applying self-affirmation to these kinds of debates soon.)

Whether it’s possible to do that with climate change remains to be seen — just the words “climate change” tend automatically to split an audience into allies and enemies — but it’s possible that shifting the dialogue to focus on energy efficiency, independence, and technological innovation will bear some bipartisan fruit. (Then again, maybe not.)

For now, try this at your next contentious climate change debate: Have I mentioned how nice your hair looks today, Rush? It reminds me of this one hockey stick graph…