How to catch a coal ash spill? Send lawyers, boats, and airplanes 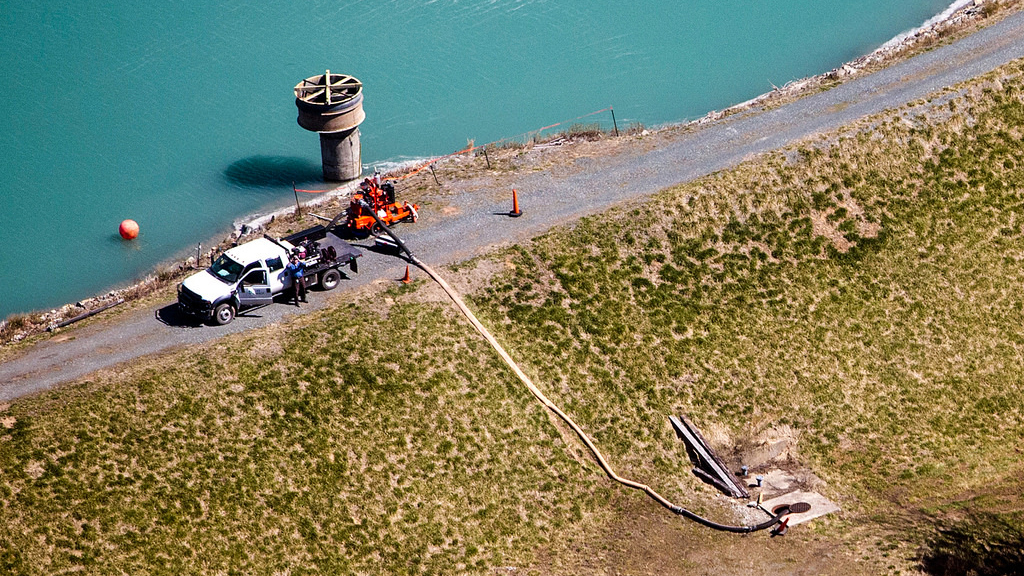 How to catch a coal ash spill? Send lawyers, boats, and airplanes

Peter Harrison has an enviable life: He spends a lot of time in a boat, exploring the waterways of North Carolina. Peter Harrison also has an interesting life: Other boats sometimes follow his, with huge cameras pointed in his direction, shutters clicking away.

“It’s just intimidation,” Harrison says. The people with cameras tend to be security guards for Duke Energy, the state’s largest electricity provider, and a company that Harrison spends a lot of time investigating.

Over the past few years, environmental groups like the one that Harrison works for, Waterkeeper Alliance, began to notice that every time they have tried to sue Duke over coal ash dumps that are spilling arsenic and mercury into North Carolina’s drinking water, the North Carolina Department of Environment and Natural Resources (DENR) would find a way to block or delay the lawsuit.

It also did not escape their notice that the state’s governor, Pat McCrory, had worked at Duke for 28 years before running for political office. Or that the secretary of DENR was a McCrory appointee who described his approach to running the agency as being “a partner” to those it regulates.

Was Duke in collusion with the agency that was supposed to be monitoring it? Sure looked that way. That’s a problem, since the structure of the federal Environmental Protection Agency leaves most responsibility for investigating and penalizing polluters to state agencies.

That’s why Harrison spends so much time on his boat. At Waterkeeper Alliance, his role is staff attorney, and that means he thinks a lot about water law. “It can be a bit nuanced and vary state to state, but water just has this sacred status in the law that goes back to Roman times, where it’s held in public trust.” Which means that, while people who investigate pollution on land can be stymied by fences and private property laws, there is no such thing as a private river.

And so, even if DENR was corrupt, there was nothing to stop Waterkeeper from stepping in and doing DENR’s work for them. Harrison describes the operation this way: “We’re doing the government’s job because they’re not. No matter how libertarian or Republican you are, protecting water and air are things we need to be able to trust our government in looking after.”

On March 10, a Waterkeeper who also happened to be a pilot flew over an abandoned Duke Energy plant and took photos of workers running a hose from a pond of toxic coal ash into an adjacent canal. Local Waterkeepers had been interested in the plant for a long time; the banks of one of the ponds on the site had already collapsed in 1982, and all of the ponds were old and poorly constructed.

Once they saw the photo, Harrison and a group of other riverkeepers took a boat up the canal to take water samples near where it looked like the dumping was going on. On their way back, they were met by the local deputy sheriff, who had been called by the plant’s security guards. This was not an unusual event; in one case, two Waterkeepers on the factory farm detail were nearly arrested after a farmer saw them sampling a stream and reported them to state police as methamphetamine manufacturers.

The group showed the sheriff their IDs and he let them go with a warning. But the next day the same deputy called Harrison to tell him that Duke Energy was going to arrest him for trespassing if he returned to the canal; the company had reviewed some old maps and believed the canal was private property. Duke was wrong in their interpretation of state law — as Harrison puts it, “If you can float a boat on it, it’s public” — but it took a politely worded attorney’s letter and a consultation with the county attorney before the sheriff agreed.

Meanwhile, it turned out that Duke was, indeed, dumping coal ash illegally — 61 million gallons of it. But the video of the boat’s encounter with the sheriff made it onto the Rachel Maddow Show, and arguably got the public more riled up than the spill itself.

“It’s drawn all kinds of public support,” says Harrison. “The fact that Duke Energy would try to kick us off the water was more upsetting than that they dumped 61 million gallons of highly contaminated coal ash waste water.”

Harrison, meanwhile, is back in court. DENR is currently under grand jury investigation for failing to actually regulate the Duke Energy, and Waterkeeper, along with three other environmental nonprofits, has successfully managed to involve itself in one of the cases that DENR used to preempt their own. The next step is using that involvement in the case to get access to documents that Duke doesn’t want to release. So far, it seems to be working.

Harrison hopes to get back out on his boat again soon. “I think that it can be very useful to have a lawyer out on the water,” he says. “There are always a lot of questions about trespassing law, and which kinds of discharges are illegal here, and where stuff should be coming out of some facility into the water. And where it shouldn’t be …” He pauses. “I love my job.”