How we can turn railroads into a climate solution 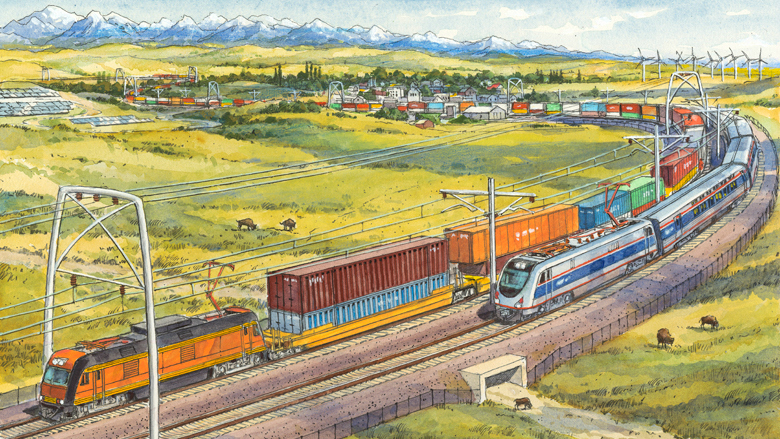 How we can turn railroads into a climate solution

Railroads have become a nexus of controversy in recent years due to their role in transporting climate-twisting fossil fuels. But they could become a locomotive driving the growth of clean energy. That is the aim of a new proposal to electrify railroads, run them on renewable energy, and use rail corridors as electricity superhighways to carry power from remote solar and wind installations to population centers.

The proposal, called Solutionary Rail, has been developed by a team of rail experts, economists, and public interest advocates assembled by the Washington state–based Backbone Campaign. Bill McKibben writes in the foreword to the recently released Solutionary Rail book that he has “been following the debate over energy, transportation, and climate change since the late 1980s … So it’s hard to come up with an idea I haven’t come across before. Rail electrification, as proposed in this remarkable book, is that rarest of things: a genuinely new idea, and one that makes immediate gut sense.”

An activist movement, sometimes known as the “thin green line,” has grown up in the Northwest in recent years to resist coal and oil shipments through the region, between the rich fossil resources east of the Rockies and the growing markets of Asia. The Backbone Campaign, a group that develops innovative strategies and tactics to build grassroots democratic movements, has been enmeshed in this movement.

The movement has been successful in stopping many fossil fuel export facilities from being built along the Pacific Coast. But it’s largely been a defensive campaign rather than a proactive one. In 2013, a rail labor leader challenged Backbone Executive Director Bill Moyer to green a labor concept for modernizing rail lines in the northern states, a “yes” to accompany the “no.” Moyer took up the challenge, and the result is Solutionary Rail.

Rail electrification is common in other parts of the world. Around the globe, electricity serves nearly a quarter of railroad track miles and supplies over one-third of the energy that powers trains. But in the U.S., under 1 percent of tracks are electrified. That’s due to high upfront capitalization costs, an obstacle that publicly owned railroads in other nations do not face. Railroads in other countries also do not have to pay property taxes on electrification infrastructure, which U.S. railroads do.

Few industries are as well positioned as railroads to lead a transition to a clean economy. Unlike other heavy, long-haul transportation vehicles such as ships, planes, and semitrucks, trains can be easily electrified, and electricity is increasingly coming from clean sources such as sun and wind. Rail is already the most efficient form of ground transportation, and it has an unparalleled capacity to provide clean freight and passenger mobility.

Under the Solutionary Rail plan, electrification would be accomplished in conjunction with track modernization. Together, these would allow express freight service running above 80 miles per hour and high-speed passenger service up to 125 mph. Very high-speed passenger rail operates above 180 mph in Europe and Asia, and is being developed in California and the U.S. Northeast, but it generally requires dedicated tracks. Solutionary Rail’s more modest increase in speed is the economically practical option for most U.S. lines. Existing tracks can be upgraded, and freight and passenger trains can be accommodated on the same lines.

The proposal also includes running power transmission lines through the rail corridors. It’s currently difficult to get the rights-of-way needed to build new long-distance, high-capacity transmission lines, which means that some renewable energy, like wind power produced in the Great Plains, is stranded and can’t get to where it’s needed. But rail corridors are already being put to industrial use, so they could easily accommodate new power infrastructure, connecting renewable-energy-rich rural areas to big metropolitan areas.

To pay for all this, the Solutionary Rail team developed the concept of Steel Interstate Development Authorities, public agencies that would be able to raise low-cost capital from financial markets and take advantage of federal transportation dollars. SIDAs for different rail corridors would be created by interstate compacts and work in public-private partnerships with railroads. The electrification would remain under public ownership, managed by the SIDA, alleviating the property tax issue. Backbone is initially pushing a SIDA in the Northern Corridor, which has rail lines stretching from Chicago to the Northwest, to demonstrate the feasibility of electrification on lines mostly owned by BNSF, a property of Warren Buffett’s Berkshire Hathaway.

Rail in the U.S. is not a huge contributor to climate disruption — it’s responsible for only 2 percent of greenhouse gases from the nation’s transportation sector. But it could be a huge part of the climate solution. A cleaner, more robust railroad system could replace substantial amounts of truck traffic, while making intercity passenger service more reliable and competitive with highways and aviation. This could help railroads thrive without being reliant on transporting bulk shipments of fossil fuels. The Solutionary Rail strategy still relies on resistance movements to stop those shipments, but offers the “yes” to strengthen the “no.” That is why the proposal has drawn support from labor leaders: It would help railroad workers make a “just transition” away from fossil fuels.

The huge, public benefits of rail electrification justify a public expenditure. But electrification would also greatly benefit privately owned railroads, and so they must offer public benefits in return. One is labor justice. Solutionary Rail has adopted the justice agenda of Railroad Workers United, a group that unites rail labor across union lines. It includes good working and safety conditions. The Solutionary Rail plan also calls for right-of-way justice for native tribes, renegotiating easements where tribes have historic grievances.

With Solutionary Rail, the oldest form of mass mechanized transportation can create a track to 21st century clean transportation and become an engine for sustainably and broadly realized prosperity.

Patrick Mazza is an independent journalist-researcher-activist focused on climate, clean energy, and global sustainability, and coauthor of the new book Solutionary Rail. Mazza has more than one way of “working on the railroad.” He also was one of the Delta 5 oil train blockaders.