Uncork the champagne: We solved that whole carbon emissions thing. The International Energy Agency (IEA) announced Wednesday that 2015 saw global energy-related emissions stall for the second year in a row, despite continued 3 percent growth of global GDP. Zooming the lens in, the same was true of energy powerhouses like the U.S. and China, which both reported a drop in energy-related carbon emissions over the same time period. 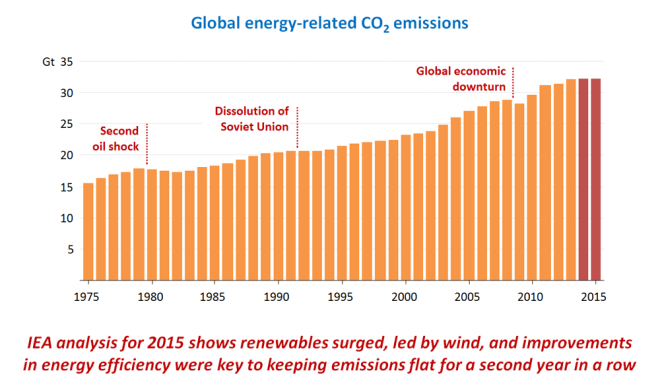 The flattening of energy sector emissions can largely be attributed to an expansion in global renewable capacity, suggests the IEA. Renewables accounted for about 90 percent of all new electricity generation last year, and wind energy alone accounted for more than 50 percent of this figure. With global GDP growth continuing to hover around 3 percent, the numbers appear to confirm what coalitions like New Climate Economy have long argued: There’s no such thing as a tradeoff between the environment and the economy.

Energy-sector emissions have only declined three other times in the past 40 years — see the highlighted time-points in the chart above — and each of those were during an economic slowdown. Two years of flat emissions means we’re getting somewhere.

Of course, this is the real world, and nothing’s quite so black and white. You’ll notice some intentional phrasing here: “energy-related CO2 emissions.” The energy sector will always be a big slice of the carbon-pollution pie — the biggest! — but it’s not the only slice. What about all the other emissions; say, from the agricultural sector? From land-use changes? From landfills?

While we won’t have up-to-date information on a lot of these other indicators for another few months, we do know that deforestation, El Niño, and rampant wildfires have already lent themselves to spikes in atmospheric CO2 levels. In Indonesia, for example, emissions due to October wildfires often eclipsed the average daily emissions from the entire U.S. economy. Land use in Indonesia accounts for more than 60 percent of the country’s annual greenhouse gas emissions.

And while energy-related emissions may have fallen in China, they have increased in the Middle East and Europe.

So yes, the IEA figures are reason to celebrate (go ahead, take a sip of that champagne), but they’re also a reason to double down on renewables.