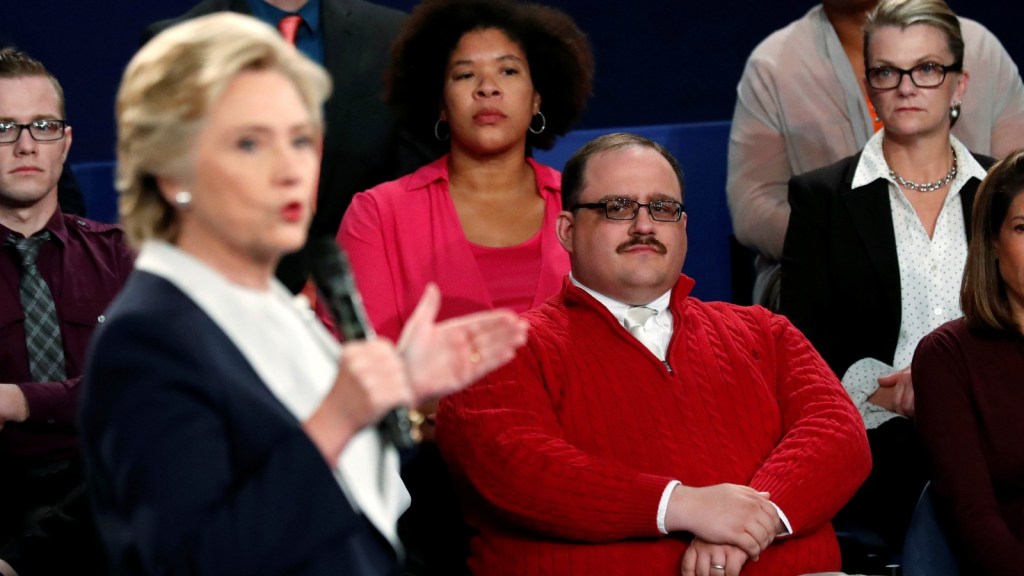 “What steps will your energy policy take to meet our energy needs, while at the same time remaining environmentally friendly and minimizing job loss for fossil power plant workers?” Kenneth Bone asked at the end of the second presidential debate, in the process becoming America’s favorite undecided voter.

The owner of the famous red sweater also has a dog in this fight — he’s the control room operator at a coal plant that he says is cleaner than the average coal plant.

So, what would Bone’s energy policy look like? “If I was Energy King and I got whatever I want,” Bone told Grist over the phone, “I would immediately allow the permitting of six more plants like mine. Six more would allow for the retirement of a pretty decent percentage of the older, less responsible plants.”

So-called clean coal is obviously a thorny issue, but there’s one green issue he’s clear on. “Climate change is science,” Bone told Grist. “If you don’t believe in it, you need to check your facts.”

That’s one reason that Bone is torn on who to vote for: Although he agrees more with Donald Trump’s economic and defense policies, he says, “the fact that Mr. Trump does not respect the science does give me some concern. For environment and social issues, I’m with Secretary Clinton.”

But Bone doesn’t entirely trust Clinton’s energy policy either. He says her plan to invest in renewable energy, creating millions of jobs in the process, shows she doesn’t entirely understand the energy sector. “Renewables typically create jobs in construction,” he says, “They are not the highly technical, highly skilled, operational jobs like you have in fossil fuel industry. Those are the types of jobs we need to replace.”

Bone is employed by Prairie State Energy Campus in Marissa, Illinois. Prairie State was created by Peabody Energy, a massive and recently bankrupt coal company. But when the company’s fortunes declined, Peabody sold its stake to surrounding municipalities with the promise of cheap electricity for their residents.

Instead, the costs for the plant went up by the billions and the price of electricity coming from Prairie State is often much higher than other local sources. The deal has been so bad for cities that several of the municipalities have even filed lawsuits against Prairie State.

In addition, Prairie State bills itself as one of the cleanest major coal plants in the nation because it uses newer, more efficient technology than old plants. “We are trying to be the face of the new generation of coal,” Bone says, “and we want to get the environmental message out there. We don’t hide behind climate change denial.”

But the myth of “clean coal” has long since gone up in smoke. A coal plant is still a coal plant, and Prairie State is responsible for spewing 13 million tons of greenhouse gases into the atmosphere each year, or the equivalent of 2 million cars. It also emits 36 million pounds of sulfur dioxide, nitrogen oxide, mercury, and soot in the air, according to the Sierra Club. And rather than attempting to lower emissions as mandated by the Clean Power Plan, Prairie State actually asked the Environmental Protection Agency for exemption and is part of an energy industry lawsuit against the EPA attempting to stop the legislation.

Besides greenhouse gas emissions, Prairie State also has a problem with ground and water pollution: The company owns a nearby mine as well as three coal ash disposal sites — and there is a lot of coal ash to dispose of. “This coal has got a very high ash content,” says Sandy Buchanan, executive director of the Institute for Energy Economics and Financial Analysis. “So it’s generating a tremendous amount of ash. Originally, [the company was] going to ship it off-site — they promised all the people in the area that they were shipping it off-site. And then once they built the plant, they changed their minds and suddenly decided they were going to store it right next to the plant. And there are farms right in the area.” Coal ash commonly contains some of the Earth’s deadliest toxins, including arsenic, lead, and mercury. These toxins can leach into the water table and impact human health.

Beyond coal, Bone would like to see more permits issued for nuclear energy, as well as an increase in renewables. He generally sounds like an advocate of the much-discredited “all of the above” energy strategy — which President Obama also touted for many years. But he doesn’t have a lot of hope that either candidate will listen to him: Despite his recent fame, Ken Bone isn’t Energy King yet.

In the days after the debate, Bone appeared on radio, television, in endless memes, and even inspired a Halloween costume — Sexy Ken Bone. Of course, fame is a fickle mistress, and by Friday, it looked like America’s affection for the man with the mustache was souring after the unearthing of some almost Trumpian comments Bone posted to Reddit in the past, as well as possible violations of FTC law by shilling for Uber.

Bone is still undecided, trying to choose between Trump’s promise to bring the coal industry back (which won’t happen) and Clinton’s promise to address climate change. When he does decide, however, he’s going to keep it quiet — he wants people to make up their own minds. “The message I have is for the people,” he says. “Respect the process and get out and vote. These candidates must be made to represent you, even if you don’t think they will.” And on Nov. 8, he says, “I’m going to wear my red sweater and hope that when I go to my polling place, people will follow.”