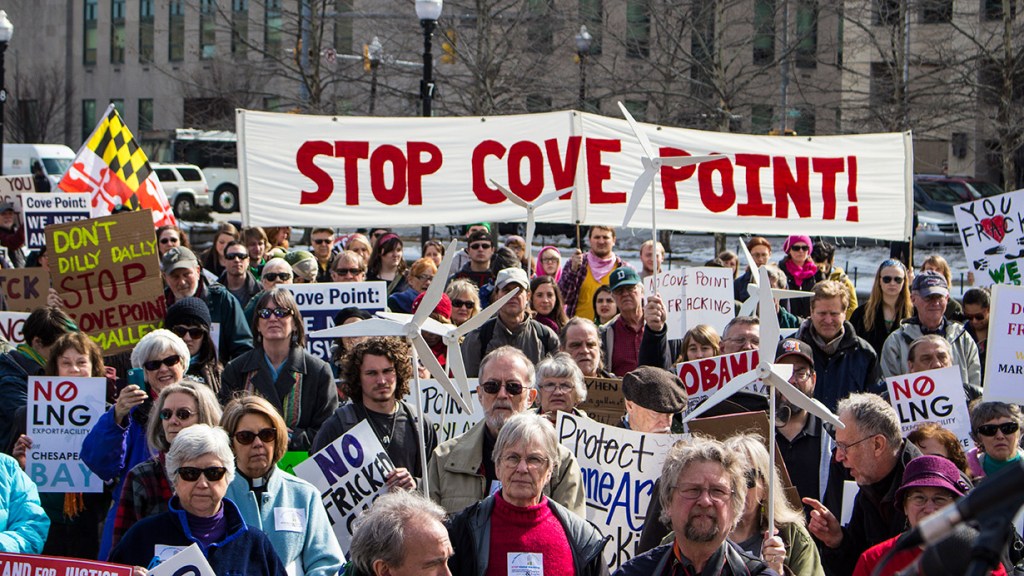 Republicans in Congress, and some Democrats too, are pushing hard to get the U.S. exporting more natural gas, using the crisis in Ukraine as an excuse. The House is considering a bill that would require the Department of Energy to immediately approve more than 20 pending applications for natural gas export facilities.

Some of the nation’s leading environmentalists, including Bill McKibben of 350.org and Michael Brune of the Sierra Club, are now launching a counter-campaign, fighting natural gas exports in general and one proposed export terminal in particular.

On Tuesday, a coalition of 16 environmental organizations sent a sternly worded letter to the White House. “President Obama, exporting LNG [liquefied natural gas] is simply a bad idea in almost every way,” they write. They express irritation with Obama’s enthusiasm for natural gas exploration and argue that gas exports would harm American consumers and the environment.

They also call on the Obama administration to consider the impact on greenhouse gas emissions before deciding whether to approve a proposed LNG export terminal in southern Maryland on Chesapeake Bay. The Cove Point project should be subjected to an environmental impact statement (EIS) that studies the potential effects on global warming, not just local pollution, they argue. From the letter:

[W]e are disturbed by your administration’s support for hydraulic fracturing and, particularly, your plan to build liquefied natural gas export terminals along U.S. coastlines that would ship large amounts of fracked gas around the world. …

Cove Point is emblematic of the irrational and fast-track strategy of the gas industry to export U.S. fracked gas and then ask questions later. …

Demand a full Environmental Impact Statement for this massive $3.8 billion project just a short drive from your house. An EIS will put more facts on the table and, we believe, will persuade you and the nation that a pell-mell rush to export gas is a pell-mell rush to global climate ruin.

Currently the U.S. is enjoying a glut of natural gas thanks to the fracking boom, which has been heartily endorsed by Obama. In his State of the Union speech in January, he touted natural gas as a cleaner “bridge fuel” that will wean us from coal and help us transition to renewable energy.

But while natural gas emits only half as much CO2 as coal when burned, methane can be released during the natural-gas production and piping process. Methane is 86 times more powerful as a greenhouse gas over a 20-year period than CO2. Recent studies have found that methane leakage may completely wipe out the climate-change mitigation benefits of gas compared to coal.

Right now very little U.S. natural gas is exported, as the infrastructure is not yet built and federal law impedes exports to countries we don’t have free-trade agreements with. Domestic energy companies and Republican politicians are eager to lift those restrictions and build terminals to liquefy natural gas so it can be shipped abroad. But the process of doing so would add further to gas’s life-cycle emissions. Lots of energy is required to chill the gas to liquefy it, ship it across the ocean, and then heat it to re-gasify it.

Exporting natural gas will not benefit American consumers or manufacturers; rather, it will raise the price we pay for gas by forcing us to compete with foreign buyers. Increase the price of natural gas enough and electric utilities might start switching back to coal, which would increase CO2 emissions and local air pollution.

McKibben has previously criticized the Cove Point plan. In January, he and Mike Tidwell of the Chesapeake Climate Action Network wrote an article in Politico Magazine making many of the same arguments that appear in their letter to Obama:

A study commissioned by the [Department of Energy] last spring found that exporting U.S. gas would raise the fuel’s price here at home. It’s basic supply and demand. More buyers overseas will drive up our domestic price by as much as 27 percent, according to the DOE. …

The gas export calculations grow even more insane when you factor in climate change. The industry bombards the public with ads saying natural gas is 50 percent cleaner than coal. But the claim is totally false. Gas is cleaner only at the point of combustion. If you calculate the greenhouse gas pollution emitted at every stage of the production process—drilling, piping, compression—it’s essentially just coal by another name. …

When you add it all up, using numbers from the EPA, the International Energy Agency and the U.S. gas industry itself, the final climate impact of fracked-and-liquified-and-exported Appalachian gas is basically as bad as burning coal in Asia. And that’s using really conservative pollution estimates. More realistic projections (i.e. assuming India’s pipeline leakage rate is higher than the United States’) would make our gas worse than coal. Worse! And Europe’s not much better. If we shipped our gas to France, for example, where the leakage rate of gas pipelines is confirmed at 3 percent, then our gas would—from day one—be worse than if the French just burned coal.

In a call with reporters on Tuesday, McKibben, Tidwell, and Brune argued that if the Obama administration really examined the climate impact of LNG terminals, it would become clear that exports are a bad idea. “I think the President has not sufficiently focused on the issue of LNG exports,” said Tidwell. “Obama and the gas industry supporters say over and over that this is good for the environment. We’re saying, ‘prove it.’ We need to get the evidence on the table and the American public will decide if it makes sense.”

But this strategy hasn’t worked out so far in the fight against the Keystone XL pipeline. The Obama administration has conducted a full EIS for Keystone, and to the dismay of environmentalists, it found that the pipeline wouldn’t make much of a difference to climate change (perhaps due to methodological flaws and conflicts of interest by the firm doing the study).

It’s also not clear that the American public will prioritize fighting global warming over perceived economic interests or the silly notion that exporting LNG will somehow combat Vladimir Putin.

But if Obama actually cares about climate change, then environmentalists say he should pause before rushing headlong into natural gas exports. Otherwise, said McKibben on Tuesday, “We are about to lock ourselves into a whole new category of fossil fuel trouble.”

[Editor’s note: McKibben serves on Grist’s board of directors.]