Energy state of Obama's union: Drill? Frack? Cut carbon? "All the above" 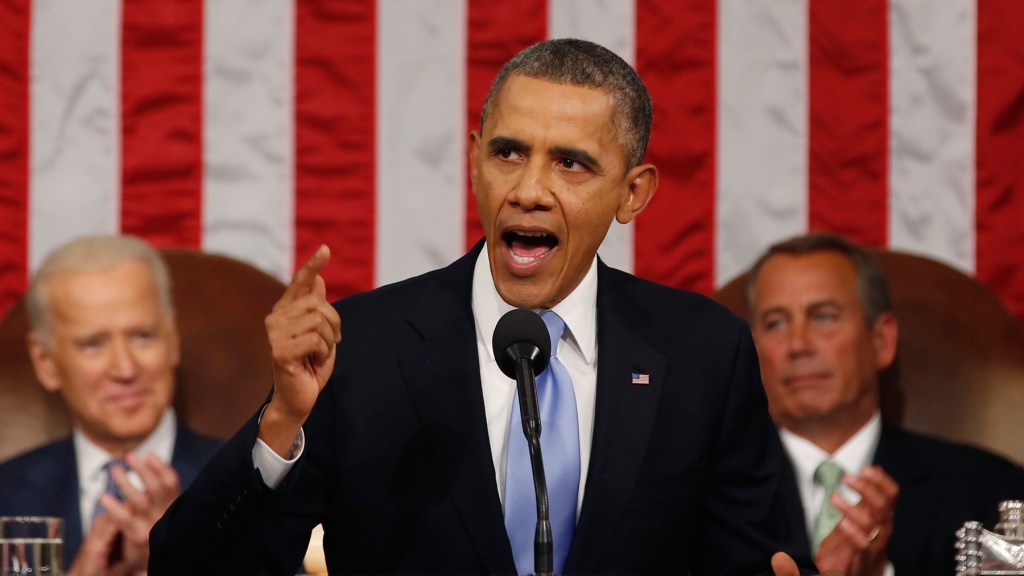 Energy state of Obama’s union: Drill? Frack? Cut carbon? “All the above”

President Obama received a letter 10 days ago from the nation’s leading environmental organizations, urging him to stop opening American lands and waters to fossil fuel extraction. Tuesday’s State of the Union address shows that he was unmoved by their plea.

Instead, the president doubled down on both his energy policy goals: taking a series of actions to reduce greenhouse gas emissions, while ramping up domestic dirty energy production. Obama’s speech was framed around creating economic opportunity. And from the short-term perspective of generating jobs in as many sectors as possible — from building solar panels to operating gas drilling machinery — his approach makes a certain sense. But if you’re trying to resolve the climate crisis, it’s a step forward on one hand and a step back on the other.

Obama, as his administration usually does, most recently in the White House’s response to the environmental letter, talks a good game on climate change. Here is the key State of the Union paragraph on climate and energy, inspiring as always:

Taken together, our energy policy is creating jobs and leading to a cleaner, safer planet. Over the past eight years, the United States has reduced our total carbon pollution more than any other nation on Earth. But we have to act with more urgency – because a changing climate is already harming Western communities struggling with drought, and coastal cities dealing with floods. That’s why I directed my administration to work with states, utilities, and others to set new standards on the amount of carbon pollution our power plants are allowed to dump into the air. The shift to a cleaner energy economy won’t happen overnight, and it will require tough choices along the way. But the debate is settled. Climate change is a fact. And when our children’s children look us in the eye and ask if we did all we could to leave them a safer, more stable world, with new sources of energy, I want us to be able to say yes, we did.

Tightening CO2 emission standards for power plants is the biggest and most important thing a president can do without congressional action to move the arc of climate change. Environmental organizations released statements applauding Obama’s reiteration of his commitment to such standards. Some also expressed pleasure at his growing confidence in speaking forcefully for climate action on its own terms. “I didn’t see anything big and new in the climate area, except the focus,” said David Doniger, policy director for the NRDC’s climate and clean air program. “If [State of the Union speeches] were talking about clean energy, it used to be for other reasons. Now, they’re unabashedly promoting it as something you’ve got to do to protect the climate and the planet.”

But Obama has not shifted away from his “all of the above” energy policy. In another section of his speech, he touted the virtues of natural gas: “The all-of-the-above energy strategy I announced a few years ago is working, and today, America is closer to energy independence than we’ve been in decades. One of the reasons why is natural gas – if extracted safely, it’s the bridge fuel that can power our economy with less of the carbon pollution that causes climate change.”

The “bridge fuel” rhetoric is troubling. Building the infrastructure for a natural gas power economy, as Obama proposes, could mean embedding a reliance that won’t quietly go away one day when our bridge to a clean energy future has been built. Obama also bragged about the growth of U.S. domestic oil production.

Some environmental groups criticized Obama for his fossil-fuel focus. “We can’t drill or frack our way out of this problem,” said Sierra Club executive director Michael Brune, in a statement. “Make no mistake — natural gas is a bridge to nowhere. If we are truly serious about fighting the climate crisis, we must look beyond an ‘all of the above’ energy policy and replace dirty fuels with clean energy. We can’t effectively act on climate and expand drilling and fracking for oil and gas at the same time.”

The contradiction between these commitments — reducing emissions while boosting domestic oil and gas production — was on full display throughout the speech and in the policy bullet points the White House sent to reporters. Obama did not actually offer new ideas so much as boast about actions he has already taken or reiterate proposals he has already made.

Here are some highlights from the policy announcements — all small-bore, since Obama cannot plan on any help from Congress on major changes that require legislation:

“As part of the Climate Action Plan, since August, the Department of Energy (DOE) has proposed five energy conservation standards and finalized one standard for appliances and equipment.”

When a company builds an appliance like a refrigerator, it’s not going to spend extra money to improve energy efficiency on its own — it’s not the party paying the electric bill. So the Energy Department is imposing efficiency standards that will cut greenhouse gas emissions and save consumers money. This, however, like the power plant regulations, is a policy that’s already in place — the president is just bragging about it now.

The devil’s-in-the-details: “Promoting Safe and Responsible Production of Natural Gas”

The key development here is that the administration is working on rules to reduce methane leaks in fracking. That’s necessary, especially if you want even more natural gas drilling. But how strong will the rules actually be? No one yet knows.

“We’ve been pushing really hard for EPA and [the Bureau of Land Management] regulations to cut the leakage of natural gas,” says Doniger. “We’re looking for a plan that will bottle up those leaks. The best operations don’t leak, because they have the best equipment and practices, but lots of operations are sloppy. We want to see a detailed plan with air, water, and climate safeguards that we’ve been promised on natural gas infrastructure.”

Here’s the good part, which we already know because Obama announced it last summer: he is going to impose new fuel efficiency standards for medium and heavy weight trucks.

Here’s the confusing part: “The President will propose new incentives for medium- and heavy-duty trucks to run on natural gas or other alternative fuels and the infrastructure needed to run them.”

Obama — going back to his days in the Senate — has been curiously fond of biofuels, such as ethanol, that often don’t live up to their promised environmental benefits. This particular proposal was floated by Obama last summer as a way of investing money currently going to oil industry tax subsidies.

While virtually anything would be a better use of the money than the status quo, the Republican Congress won’t agree to it. Anyway, getting trucks to run on natural gas is an odd choice of how to use those savings, if we could even get them. One upside: natural gas, whatever its limitations as a tool for fighting climate change, produces less particulate pollution than oil. So reducing the number of trucks roaming the streets spitting smog out of their tailpipes might help alleviate some environment and public health problems, such as high inner-city asthma rates. But, as with so many of Obama’s energy proposals tonight, these improvements would only be marginal.

Overall, Obama’s speech was reminiscent of President Clinton’s famously minimalist, centrist second term proposals, like school uniforms. “Everything on this list was proposed in previous [State of the Union] speeches by Obama,” said Tyson Slocum, director of Public Citizen’s energy program, in an email. “Are they good? Except for the Energy Security Trust, which is clean energy funded by a fee on oil and gas development, sure. Are they game changers? Absolutely not.”

When it comes to dirty energy projects that supposedly will generate construction jobs, Obama was silent on the one environmentalists have been waiting with bated breath for his decision on: Keystone XL. Tom Steyer, the billionaire environmental activist, bought an ad to run on MSNBC around the speech, that encourages rejection of the proposed pipeline for Canadian crude oil. Borrowing a page from Obama’s own rhetorical handbook, Steyer’s ad attacks Keystone in nationalist terms — more oil for China, not American consumers — rather than for its greenhouse gas emissions.

Ultimately, Obama’s policies are less than perfect because he is dealing with a Republican House of Representatives. But, as Bill McKibben recently noted in Rolling Stone, the GOP House isn’t making the president roll out a red carpet for oil and gas companies looking to drill on public land.

One of the most forceful notes in Obama’s lengthy speech was his declaration that climate change is real. The president says he wants to do everything he can to avert climate catastrophe. Whether he will is still an open question.