This year brought what former Texas governor (and current idiot) Rick Perry had us praying for back in 2011: big, biblical buckets of rain. In May, I was passing through the last suburbs of Dallas on my way back home to Austin. Ahead of me, the sky was like a two-day-old bruise. About 10 minutes later, I was in it. Water poured over my windshield. I bent forward and squinted, my knuckles white on the steering wheel. I was doing 15, but was shooting past other drivers who had stopped where they were, hit their flashers, and decided to wait for the sun. The rain would drop over five inches in Austin that night and keep at it for another two days.

In times of drought, rain starts to feel like a figment of the imagination, and floods like a laughable fiction. But if the predictions of climate experts are correct, we’ll be seeing more frequent swings from one extreme to another: Texas’ travails are a prologue for the entire West, and arid lands around the world. Today this is just a tableau of things to come from shell-shocked Texas, but unless planners and politicians everywhere can begin to imagine a bigger, more violent climate, we may well be reading similar dispatches from one state after another.

At the end of the flood, Texans wandered dazed through the wreckage. Football fields were submerged to the crossbars on their goalposts. Piles of furniture — water-logged and ruined — sat on curbs in the lowest parts of Austin. In Wimberley, several homes had been whisked away as easily as paper boats, taking their residents with them. According to The Guardian, $42 million in damages occurred when the rains hit Houston. Thirty-one people died. FEMA lumbered into action. Hashtags flickered across cyberspace. 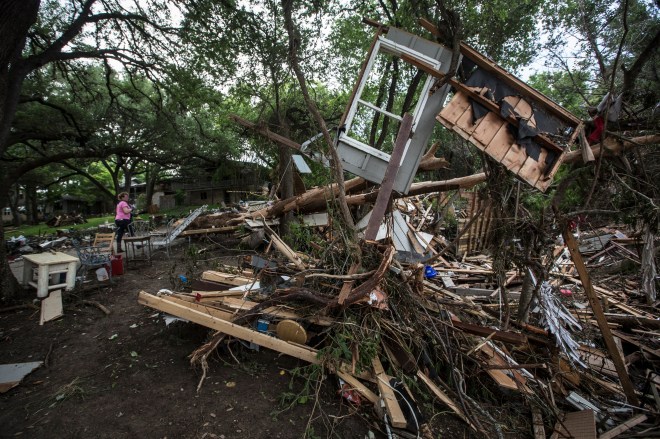 The aftermath of the Blanco River flood in Wimberley, Texas May 26, 2015.REUTERS/Tamir Kalifa

Through all of it, us Texans thought, “Well, at least we’re out of the drought, right?”  The media would confirm this consolation — headlines told us the drought was over, and technically they weren’t wrong. It’s tempting to turn our minds to other, more pleasant things, but the water crisis isn’t over in Texas, not by a long shot. Texas oscillates between drought and flood constantly, and complacency is a dangerous attitude, especially with climate change making the weather more unpredictable every year.

It’s easy to look at the past five years in Texas and see why so many are quick to call the drought a thing of the past. Since 2010, Texas has been crippled by a drought that State Climatologist John Nielson-Gammon compared to the big one of the ’50s, which lasted from 1950-57. It was so brutal that 200,000 ranches and farms dried up and blew away and changed the statewide attitude toward water planning.

In 2011, the La Niña weather pattern made for an incredibly dry year — only 15 inches of rain fell. To compare: Austin usually sees 34 inches of rain annually, Dallas, 41, and Houston, 45.

That year, if you drove through the more rural parts of the state, there was a good chance you’d see cows standing in what was usually their watering hole, licking hopefully at the mud. In 2012-13, the El Niño weather pattern scientists predicted didn’t happen; the drought continued. Corn withered on the stalk, and the Texas Commission for Environmental Quality cut off water for rice farmers for a fourth time in the three years since the drought. It was grim — were water wars in our future? Visions of Tank Girl, Mad Max, and Dune haunted our dreams.

But then a wet year like this one comes along, and we see increases to our surface and groundwater levels, and the major aquifers start to get recharged. Yeehaw. While this is good news, there’s danger in forgetting about Texas’ urgent water needs. Just because the drought has ended for now doesn’t mean it won’t be nipping at Texas’ heels next summer.

Meteorologist and climatologist Troy Kimmel, a faculty member at the University of Texas at Austin’s Geography and the Environment department, said one wet year isn’t a long-term solution to a five-year problem.

“Most of that water didn’t stick; it emptied into the Gulf,” he said. “And there are still parts in the [Texas] Hill Country in drought.”

It’s easy for people to forget about the water crisis with the image of flooded downtown Austin still fresh in their minds. “They see green in their yards, and think, ‘What drought?’” Kimmel said. “I believe we ought to keep water usage restrictions in place. Especially since our water needs will become more urgent the more the population increases.” The flood may have been able to lift Texas out of the drought, but the long-term solution to water shortages can’t simply be lots and lots of rain.

Many of the public water systems in Texas have lifted water restrictions for their residents, and many might mistakenly draw the conclusion that the lack of restrictions is the sole result of the increased rain, but it isn’t that simple.

Andrea Marrow, who works for the Office of Water (an uncharacteristically clear title for a government bureau), patiently explained the complexities that go into rating public water systems. (Important aside: If you call the Office of Water, you’ll be serenaded by a Texas cowboy crooning aquatic-themed country ditties, which would have been reward enough for me). She explained they’ve been fixing these stressed water systems since 2009, but this is often forgotten by the public.

In fact, a big success story reported by media outlets was Spicewood Beach, which ran out of water in 2012; the government hauled water into the community for a few years. Now the plumbing is working in Spicewood Beach again, Marrow said, but not because of the rain: there had been a problem with the water system that was not directly caused by the drought. And workers cleared that up months before the floods hit.

There were some public water systems, like Wichita Falls, that are more dependent on groundwater and “were significantly benefited by the rains of May,” Marrow said. But, she insisted, it would be irresponsible to claim that public water systems have been improved because of just one thing. Right. That makes total sense — droughts are complicated, multi-faceted beasts, yet it’s easy to forget all about them once it’s rained for a month.

There is a danger as water restrictions lift: a lack of restrictions makes it easier to forget about conservation. When residents are no longer receiving water restriction notices in the mail (usually decorated with clipart and veiled threats), they tend to think the emergency is over. While some cities—like Austin—continue to institute voluntary restrictions when not in drought, others don’t. Texas has been do-si-do-ing with drought for so long that conservation shouldn’t be so easy to forget, but it is.

Even before the rubble from the floods has had time to settle, the water’s effect on the drought has already started to recede: In a weekly report of current water conditions across the state, the Texas Water Development Board showed abnormally dry areas in the central and eastern parts of Texas, and in the panhandle. Plus, this report revealed that “the 21-week run of statewide reservoir storage increases has ended with statewide storage decreasing by 60,000 acre feet last week.”

Sure, statewide reservoir storage is up by 20 percent compared to the past two years, but that storage is starting to decrease. If next summer is a dry one, we might be back to where we were last year or the year before, and when the next La Niña hits? Well, then we might have to go back to praying for plagues.