It was the early ’90s, and John Delaney was frustrated. For the past decade, he’d been studying a massive volcano about 300 miles due west of the Oregon-Washington border. It was right on the edge of the Juan de Fuca tectonic plate, stood more than a thousand meters tall, and was teeming with life adapted to its extreme temperatures and acidity. The problem? It was at the bottom of the ocean.

On days when Delaney got to visit the volcano, known as Axial Seamount, he would get in a research submarine around 8 a.m., launch at 8:30, get to the seafloor by 10-ish, and then wander around — sometimes aimlessly in the early days of low-tech navigation — before he had to head back up to the surface around 3 or 3:30.

One day, Delaney was sitting in a bar in San Francisco, complaining about the inadequacy of these short trips, when a friend told him about underwater fiber optic cables. Just like electric cables, fiber optic cables allow for two-way communication between devices. Unlike electric cables, they use light, rather than electrons, which makes them better for fast, long-distance communication. Bell Labs was developing the technology at the time, and AT&T had already laid the first cable down between the U.S. and Europe in 1988.

That was it, Delaney thought. If he could just wire up the Juan de Fuca tectonic plate, he could create a kind of underwater laboratory teeming with robots and sensors. The setup could provide the constant stream of information that he so desperately wanted — pressure data, seismic readings, acidity levels, video streams, sound recordings. Altogether, he estimated it would cost about $75 million.

Plenty of people laughed at the idea at first, Delaney recalls; some even walked out of the room when he proposed it in lectures. But today, more than two decades, $150 million, and 550 miles of cable later, Delaney has his underwater laboratory.

On a sunny morning in July, Delaney sits in his office on the edge of Lake Union in Seattle. He’s wearing blue jeans and a black turtleneck under a tan blazer, and he speaks in a calm, deep voice. The chatter of hungry seagulls and a cool breeze flow in through an open window.

At 73, Delaney has been a professor of oceanography at the University of Washington for more than 30 years. He’s been on PBS, given a TED talk, and lectured all over the world. He’s been the head scientist on more than 45 research cruises and has published nearly 100 scientific papers. But on this morning, reclining in his chair and shootin’ the breeze like he doesn’t have a million things on his plate, he seems just as happy to talk about his love of poetry and the wonders of the sea as he is about underwater technology. 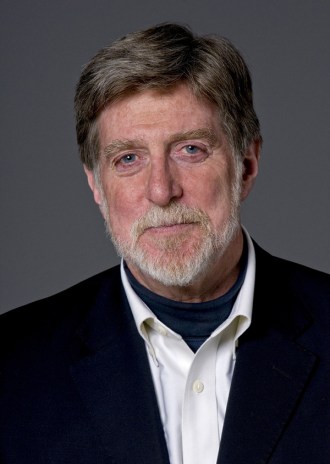 “I would do almost anything that it would take to bring the ocean to the public,” he says. “In the final years of my life, that’s what I’d like to do.”

Delaney was born in Hawaii the day after the bombs hit Pearl Harbor. His dad was in the military, so the family moved around a lot — San Francisco, Virginia, Illinois, and finally, North Carolina. “I used to have a southern accent,” he says, dropping his voice momentarily into a deep drawl, “but I left that behind when I left North Carolina. My mama would not recognize my voice.”

In graduate school, Delaney studied mining geology — basically, how to measure the distribution of copper, lead, zinc, and other metals in the earth. Late in his student days, he had the opportunity to go the Galapagos Islands with his advisor to study the gases coming out of five of the island’s six western volcanoes. He used half of his and his wife’s life savings to join the first of two three-month expeditions (the second, fortunately for his bank account, was paid for).

“It was such a personal, scientific, psychological, and emotional experience to be in the Galapagos,” he says. “I was 28 years old. I was very full of piss and vinegar, very confident in myself.”

The trip was a turning point for Delaney. After finishing his degree, he moved to the University of Washington to study submarine volcanic glass, and in 1980, took his first trip down to Axial in a research submarine. That was when he fell in love with the ocean. One of his favorite quotes, he says, is by the writer Dave Barry:

“When you finally see what goes on underwater, you realize that you’ve been missing the whole point of the ocean. Staying on the surface all the time is like going to the circus and staring at the outside of the tent.”

Fast forward to 2011, and Delaney and his collaborators are laying down the first bit of fiber optic cable on the eastern side of the Juan de Fuca plate. They finished the whole setup just last year and now have more than one hundred measuring devices set up all over the circus tent — er, ocean. Here’s a sampling: 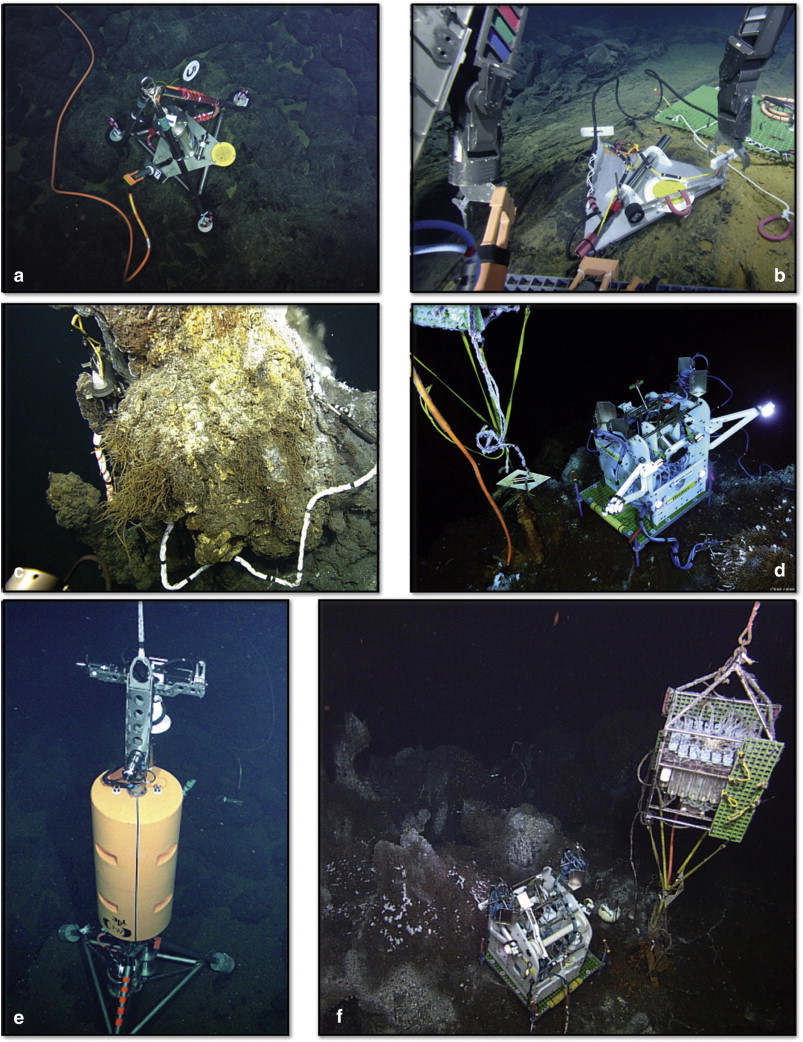 Among the devices spread around Axial are instruments that measure the deflation/inflation of the sea floor (a), seismic activity (b), temperature and resistivity (c), and water flow (e). There’s also a video camera (d) and fluid sampler (f). a) OOI-NSF/UW/CSSF. b) OOI-NSF/UW/CSSF. c) OOI-NSF/UW/CSSF. d-f) IOcean Networks Canada and CSSF

The laboratory already proved its worth this past April, when Axial experienced a major eruption. Even big eruptions normally go unnoticed, Delaney says, because they happen more than a mile under water. But with the cable, scientists knew not only that an eruption was happening, but also that the floor of the caldera — the part of a volcano that sinks after the magma chamber empties — fell about 2.4 meters in fewer than 18 hours and that the eruption caused 8,000 small earthquakes in just one day.

Delaney says that in the future, the team should have a research vessel at the ready in case of an eruption. That way, he says, they can go out within a week or two after the event to take samples of microbial life, measure changes in venting behavior, etc. Eventually, he says, they’d like to have an autonomous vehicle roaming around Axial all the time so that when the next eruption happens, it can immediately start snapping pictures and taking samples.

Sometime within the next year, all the data streaming in from the laboratory should be freely available online, as part of the NSF’s Ocean Observatories Initiative. This kind of sustained, long-term monitoring of a large ocean environment is unprecedented, Delaney says (although Canada did build a similar underwater observatory off the coast of Vancouver Island in tandem with the Axial project), and could shed light not only on Axial, but also on, for example, ocean acidification, the behavior of ocean currents, and the mysterious lifeforms lurking in the depths.

As is, the cable and its array of sensors isn’t quite as comprehensive as Delaney had originally envisioned – so he and others are already planning an expansion. The new layout would cover the entirety of what’s known as the subduction zone — the area along the Washington and Oregon shores where the Juan de Fuca plate goes under the North American plate. (You may have heard of it recently.)

He’s currently trying to get funding for the new addition, which would be substantially larger than the existing set-up around Axial and, by his estimate, cost about half a billion dollars. But if designed properly, it could also act as an early warning system for the inevitable earthquake looming over the Pacific Northwest. Japan began building a similar early warning system in 2013 after a devastating earthquake and tsunami killed more than 15,000 people in 2011.

Pulling up a mockup of the proposed expansion, Delaney looks up at the clock apologetically. He has to meet a colleague for lunch, although he seems like he could chat for hours if he had the time. Not about anything in particular — Axial, the cable, his favorite writers, the backstory behind that giant hydrothermal vent pictured on his wall, why he likes to open lectures with a joke, whether or not that New Yorker article was over-the-top. And this reporter, nestled into the la-z-boy Delaney has set up next to his desk, could certainly sit and listen.

But his undivided attention and thoughtful conversation are in spite of the million things that he does, in fact, have on his plate: a son flying in from Haiti later that day, more visitors arriving later that week, a camera crew showing up for an interview at some point, that party happening on the research ship in a couple weeks, all the usual obligations of a university professor and scientist.

Last year, Delaney gave a series of public lectures titled “The Global Ocean & Human Culture: Past, Present & Future” — just one way he’s been trying to “bring the ocean to the public.” His fascination with the sea has gone far beyond Axial since he took that first trip in a submarine 35 years ago. For him, the sea is mysterious and frightening and deeply poetic, which is why, on his personal website, he has a page just for poetry. Here’s one from Henry Wadsworth Longfellow:

The sea awoke at midnight from its sleep,
And round the pebbly beaches far and wide
I heard the first wave of the rising tide
Rush onward with uninterrupted sweep;
A voice out of the silence of the deep,
A sound mysteriously multiplied
As of a cataract from the mountain’s side,
Or roar of winds upon a wooded steep.
So comes to us at times, from the unknown
And inaccessible solitudes of being,
The rushing of the sea-tides of the soul;
And inspirations, that we deem our own,
Are some divine foreshadowing and foreseeing
Of things beyond our reason or control.