Look out, Arizona! California isn't the only state getting hit by drought - Grist 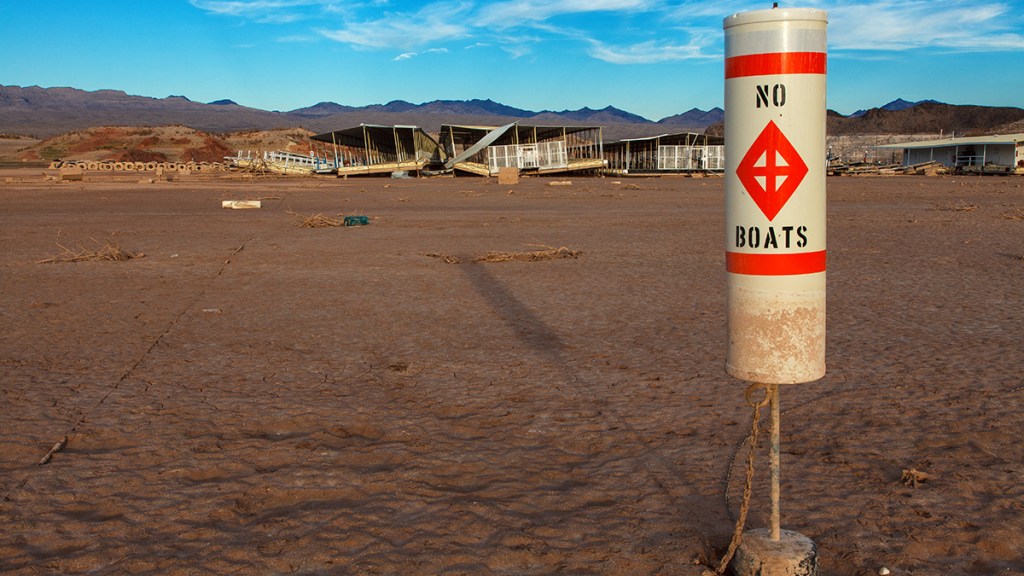 Look out, Arizona! California isn’t the only state getting hit by drought

Two weeks ago, Lake Mead, which sits on the border of Nevada and Arizona, set a new record low — the first time since the construction of the Hoover Dam in the 1930s that the lake’s surface has dipped below 1,080 feet above sea level. The West’s drought is so bad that official plans for water rationing have now begun — with Arizona’s farmers first on the chopping block. Yes, despite the drought’s epicenter in California, it’s Arizona that will bear the brunt of the West’s epic dry spell.

The huge Lake Mead — which used to be the nation’s largest reservoir — serves as the main water storage facility on the Colorado River. Amid one of the worst droughts in millennia, record lows at Lake Mead are becoming an annual event — last year’s low was 7 feet higher than this year’s expected June nadir, 1,073 feet.

If, come Jan. 1, Lake Mead’s level is below 1,075 feet, the U.S. Bureau of Reclamation, which manages the river, will declare an official shortage for the first time ever — setting into motion a series of already agreed-upon mandatory cuts in water outlays, primarily to Arizona. (Nevada and Mexico will also receive smaller cuts.) The latest forecasts give a 33 percent chance of this happening. There’s a greater than 75 percent chance of the same scenario on Jan. 1, 2017. Barring a sudden unexpected end to the drought, official shortage conditions are likely for the indefinite future.

Why Arizona? In exchange for agreeing to be the first in line for rationing when a shortage occurs, Arizona was permitted in the 1960s to build the Central Arizona Project, which diverts Colorado River water 336 miles over 3,000 feet of mountain ranges all the way to Tucson. It’s the longest and costliest aqueduct in American history, and Arizona couldn’t exist in its modern state without it. Now that a shortage is imminent, another fundamental change in the status quo is on the way. As in California, the current drought may take a considerable and lasting toll on Arizona, especially for the state’s farmers.

“A call on the river will be significant,” Joe Sigg, director of government relations for Arizona Farm Bureau, told the Arizona Daily Star. “It will be a complete change in a farmer’s business model.” A “call” refers to the mandatory cutbacks in water deliveries for certain low-priority users of the Colorado. Arizona law prioritizes cities, industry, and tribal interests above agriculture, so farmers will see the biggest cuts. And those who are lucky enough to keep their water will pay more for it.

According to Robert Glennon, a water policy expert at the University of Arizona, the current situation was inevitable. “It’s really no surprise that this day was coming, for the simple reason that the Colorado River is overallocated,” Glennon told me over the phone recently. Glennon explained that the original Colorado River compact of 1922, which governs how seven states and Mexico use the river, was negotiated during “the wettest 10-year period in the last 1,000 years.” That law portioned out about 25 percent more water than regularly flows, so even in “normal” years, big reservoirs like Lake Mead are in a long-term decline. “We’ve been saved from the disaster because Arizona and these other states were not using all their water,” Glennon said.

They are now. Since around 2000, Arizona has been withdrawing its full allotment from the Colorado River, and it’s impossible to overstate how important the Colorado has become to the state. About 40 percent of Arizona’s water comes from the Colorado, and state officials partially attribute a nearly 20-fold increase in the state’s economy over the last 50 years to increased access to the river.

On April 22, Arizona held a public meeting to prepare for an eventual shortage declaration, which could come as soon as this August. The latest rules that govern a shortage, established in 2007 by an agreement among the states, say that Arizona will have to contend with a 20 percent cut in water in 2016 should Lake Mead fall below 1,075 feet, which will decrease the amount available to central Arizona’s farmers by about half. At 1,050 feet, central Arizona’s farmers will take a three-quarters cut in water. At 1,025 feet, agriculture would have to make due largely without water from the Colorado River. That would probably require at least a temporary end to large-scale farming in central Arizona. Below 1,025 feet, the only thing Colorado River states have agreed to so far is a further round of negotiations. In that emergency scenario, no one really knows what might happen.

Beyond Arizona, the implications of the on-going megadrought in the West are profound. The Colorado River currently supplies water to more than 40 million people from Denver to Los Angeles (as well as Las Vegas, Phoenix, Tucson, San Diego, Salt Lake City, Albuquerque, and Santa Fe — none of which lie directly on the river). According to one recent study, 16 million jobs and $1.4 trillion in annual economic activity across the West depend on the Colorado. As the river dries up, farmers and cities have turned to pumping groundwater. In just the last 10 years, the Colorado Basin has lost 15.6 cubic miles of subsurface freshwater, an amount researchers called “shocking.” Once an official shortage is declared, Arizona farmers will increase their rate of pumping even further, to blunt the effect of an anticipated sharp cutback.

According to Dan Bunk of the Bureau of Reclamation’s Colorado River operations office, the current projections, factoring in both the ongoing drought and the systemic overallocation, are “almost guaranteeing a shortage in 2017.” Engineers are already installing new hydropower electricity-generating equipment at Lake Mead to prepare for the contingency of the lake reaching so-called “dead pool” levels — below which the Colorado River will no longer be able to spin Hoover’s power-generating turbines. A new intake from Lake Mead to Las Vegas will come online later this year, allowing the city to essentially suck the lake dry, all the way down to the last drop.

So, is there anything that can be done? As is the case in California, the fate of the Colorado River is largely in the hands of agriculture. Nearly 80 percent of the river’s annual flow is diverted for agricultural use. Since urban water use is becoming more efficient at a quicker pace than agricultural water use, the only way to make the numbers work in an increasingly climate-constrained future is to switch to less water-intensive crops or decrease the total acreage devoted to agriculture. And that’s not happening fast enough.

To solve that problem, Glennon has proposed a voluntary shift of water rights. In practice, this would mean that cities, which currently use water in more efficient ways, would pay farmers, who use water in less efficient ways, for the rights to their water. Farmers currently engaged in the most water-intensive crops (like cotton, rice, alfalfa, and almonds) would have a financial incentive to divert their water to people and businesses willing to pay more for it in times of shortage — and a financial incentive to grow less alfalfa.

“We’re not talking about the elimination of agriculture,” Glennon said. Since agriculture uses so much water, “a very small single-digit reduction in ag consumption translates into a huge percentage increase of water available for municipal and industrial consumption.” In dry years, Glennon says, urban areas and industry would likely pay farmers even more than they’d make growing their crops for the right to use their water. The increased cost of water for cities as a result of his plan is “a rounding error,” Glennon says. Problem is that it’s currently common for state laws and byzantine rules governing water rights in Western states to restrict such transfers, as is the case in Arizona.

Among the other options officially on the table in the state of Arizona: desalination and cloud seeding. But, according to Glennon, such proposals are “not responsible stewardship of the state water agency.” (The desalination idea would require building a desalination plant in Mexico and constructing another Central Arizona Project–like aqueduct system to transport it northward across the border.) Glennon thinks the answer is much easier. “We need to stop growing alfalfa in the deserts in the summertime.”

And what if nothing changes? Well, then, the water supply certainly will. “Pretty dramatic cutbacks could happen relatively quickly,” Glennon said. “That will bring a new urgency to doing a lot of things.”

See more of Slate’s coverage of the West’s drought.