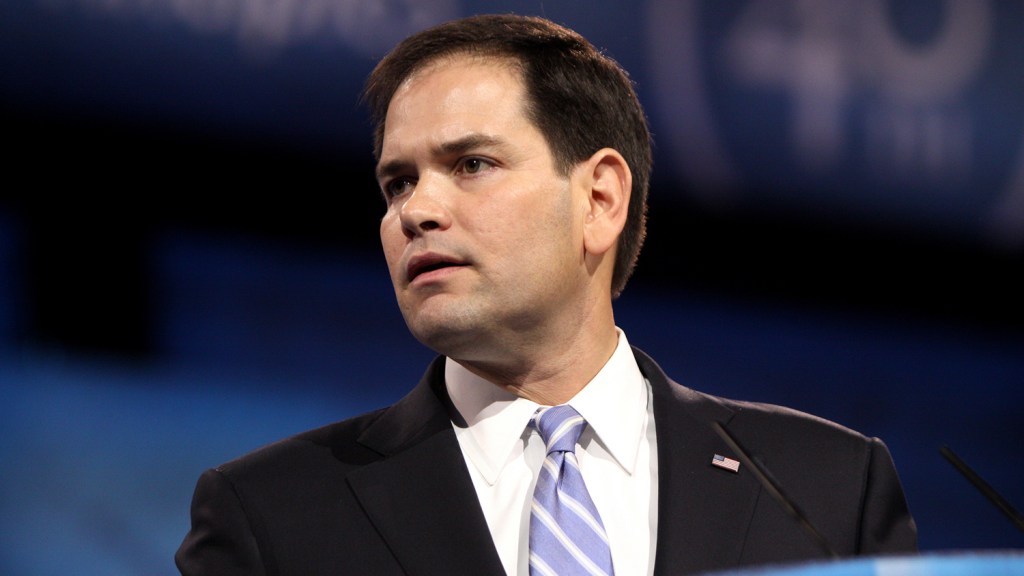 There is good news and bad news for climate hawks from the second Republican presidential debate. The good news is that so many people on social media pushed for a question on climate change that CNN moderator Jake Tapper felt compelled to ask one. And his question was fairly sensible, noting that Saint Reagan had required industry to reduce pollution that was thinning the ozone layer, and that the Great One’s secretary of state, George Shultz, now argues the U.S. should take the same approach to climate change.

The bad news it that even though the question was posed to Marco Rubio and Chris Christie, who are supposed to be from the GOP’s less insane wing, their responses consisted of a series of misunderstandings at best, or lies at worst. While they did avoid denying the basic science of climate change — progress, of a sort, since Rubio has denied it in the past — Rubio made a series of false assertions and Christie said he agreed with them. Here’s the nub of what Rubio said:

Maybe a billionaire here in California can afford an increase in their utility rates, but a working family in Tampa, Florida, or anywhere across this country cannot afford it.

And we are not even the largest carbon producer anymore, China is. And they’re drilling a hole and digging anywhere in the world that they can get a hold of.

Rubio is making three distinct claims regarding the Obama administration’s climate agenda, so let’s take each one at a time:

• “A working family … cannot afford it.” Actually, multiple independent studies have found that the Obama administration’s main climate action, the Clean Power Plan, will lower average utility bills. For example, a report in July from Synapse, an energy economics analysis firm, found that under the Clean Power Plan, energy bills in 2030 would be $35 per month lower than they would if we followed a business-as-usual path. That means the average household’s electricity bill would actually be $14 per month cheaper in 2030 than it was in 2012. The Clean Power Plan incentivizes improved energy efficiency, and improved efficiency means less electricity is used to perform the same task. So even if the price per megawatt-hour of electricity rises, if you consume fewer megawatts, you would pay less in total. Another study that came out in July, from Georgia Tech, also found that enacting the Clean Power Plan would lead to lower utility bills as well as greater GDP growth.

• “Every proposal they put forward … will make it harder to do business in America, that will make it harder to create jobs in America.” The argument that the Clean Power Plan will undermine economic growth follows from the premise that it will raise the cost of electricity. But if that premise is false and it would actually lower electricity costs, then it wouldn’t hamper economic growth. If anything, it would spur growth. Utilities shutting down old coal-fired power plants while building new wind or solar capacity is a net job creator. That’s why an April study by economists from the University of Maryland and Industrial Economics, a private consulting firm, found that the Clean Power Plan would create about 273,000 jobs. As InsideClimate News explained, “Even though jobs would be lost among workers at money-losing coal mines (perhaps 10,000 jobs) and at old, inefficient power plants that would be shut down rather than cleaned up (about 40,000), there would be many times more jobs created among those hired to build cleaner new plants or to install pollution controls. And because the EPA’s plan also encourages conservation of electricity and switching to renewable fuels, jobs in those sectors would grow, as well.”

• “[Reducing emissions will] do absolutely nothing, nothing to change our climate.” Rubio may no longer be denying climate science, but he apparently still doesn’t quite understand it. Every little bit of emissions contributes to warming. Yes, if the U.S. cut its emissions and no one else did, warming would rise to catastrophic levels. But that doesn’t mean cutting our emissions — which are currently the world’s second-highest — would do “absolutely nothing.” It would prevent at least a little warming, which would be better than nothing.

More importantly, the U.S. is not cutting emissions in a vacuum. When we take steps to curb our carbon output, other countries take note and in many cases follow suit, so cuts made by the U.S. have an outsized impact in the world. Rubio suggests that China is spewing CO2 with abandon, but in fact the nation has committed to significant efforts to build up its renewable energy capacity and rein in its carbon emissions, and it made those commitments as part of deal with the Obama administration. Obama’s bilateral negotiations with China and other countries, which rest on the Clean Power Plan being enacted, are creating the opportunity for success at the U.N. climate talks in Paris this December. Rubio, though, simply doesn’t understand the global politics of climate change.

As Republicans start retreating from the unpopular, embarrassingly stupid claim that the science of climate change is unconvincing, this is increasingly the terrain on which the issue will be fought: They will argue that action is too expensive, and international cooperation too hopeless. Ultimately, they’re just switching from one set of lies to another.