Don’t call Andy Sabin the Tom Steyer of the GOP. Yes, he’s a Republican business magnate who has spent millions of his own dollars to advance the fight against climate change in American politics. But Sabin, the 69-year-old CEO of Sabin Metal Corporation, the largest independently owned precious metal refiner in North America, has little regard for Steyer. And he defies comparison to, well, virtually anyone.

This is a guy who staked “Hillary for Prison 2016” posters (replete with faux campaign graphics) in the front yard of his home in Amagansett, Long Island, right around the time that the Clintons were vacationing nearby. When Sabin’s neighbors stole the signs, he punched back, hoisting the posters on 12-foot poles behind a fence with a security camera.

Which is to say: Sabin has strong convictions the way George Foreman had a strong right hook. Those convictions have spurred him to contribute hundreds of thousands of dollars to Republican campaigns at the state and national level, plus a six-figure check to Karl Rove’s American Crossroads PAC — and also to throw his considerable weight behind the climate cause.

Sabin has plowed $5 million into the Sabin Center for Climate Change Law at Columbia University Law School, which aims to develop “legal techniques to fight climate change.” While Sabin himself is wary of “overregulation” on climate issues, and bristles at measures like a carbon tax, the team at the Sabin Center is independent and politically diverse, headed up by environmental lawyer Michael Gerrard, who leans left.

Sabin is also a passionate conservationist who has funded ecosystem protection efforts and has four species named after him. His backyard is a veritable zoo of animals including goats and peacocks, and he has a special affection for snakes. We called him up recently to discuss climate law, Donald Trump, and his pet boa constrictors.

Q. Let’s start with the brass tacks. Do we need to put a price on carbon — a carbon tax of some kind?

A. I’m absolutely, totally, 100 percent against it. Now, why am I against it? Because it could never get done. The problem with a lot of the people on this issue, they have these dreamer ideas that never get passed. So they sit there, and life goes on its merry way.

I’m looking for solutions that are doable. A revenue-neutral carbon tax would be great in the perfect world, but it could never get passed. We need to find vehicles that cut carbon and can also pass the smell test with Republicans and conservatives. I want to grow the economy 4 percent and simultaneously cut carbon, and I have a plan that creates at least half a million jobs in that process. 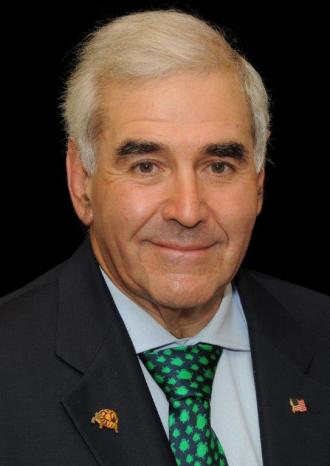 Andy Sabin with a turtle pin on one lapel and a flag pin on the other.

Q. What’s the best way to do that?

A. I’m obviously a big proponent of nuclear energy. And natural gas cuts pollution by 50 percent versus oil. We need to put research and development into new kinds of engines that generate the same horsepower but cut carbon by 50 percent. You know, the average extremely large oil tanker generates the carbon of 50 million cars in a year. Addressing that alone — making that engine more efficient — can substantially cut carbon and create jobs.

A. Yes. Look, you’re not going to have the perfect law, the perfect bill, the perfect candidate, the perfect anything. And if you can accept that what you may get is better than getting nothing, then you get momentum. Like I said, the revenue-neutral carbon tax seems like a no-brainer, but the word “tax” does not resonate in the Republican Party.

Q. What about a cap-and-trade program — could Republicans get behind that?

A. I don’t know, I haven’t spent enough time on that. I have so many things on my plate. I also run a business, by the way.

Q. Why have you committed your resources to fighting climate change through the realm of law?

A. Law is just one of a number of vehicles that I’m using. It’s not the sole way of doing it, but when you come up with environmental solutions, at the end of the day, there’s usually some law involved.

Q. Are you more interested in writing and passing new laws to address climate change or in filing lawsuits under existing laws?

A. Well, I want to enforce existing laws and maybe get rid of some that I feel are useless and are overregulation, enacted by an administration overreaching.

Q. Are you referring to Obama’s Clean Power Plan? Do you think the EPA has the authority to draft such a plan under the Clean Air Act?

A. Yeah, I think that under the Clean Air Act, there will probably be a lot of overreaching.

If you want to get conservatives on board on climate issues and carbon cutting, you’ve got to show them that you can grow the economy, which I’m showing, and create jobs. I’m interested in working with conservatives to cut carbon without a lot of regulation.

Q. You’ve been working with Jeb Bush to help him develop his energy platform–

A. I can’t really talk about my Jeb Bush work. I work with him, that’s all.

Q. Can you comment on whether you were disappointed that the energy plan he released [last month] called for more fossil fuel extraction and did not mention climate change?

A. No, I’m not going to comment, because I don’t want to be like Kevin McCarthy and the Hillary thing. Obviously, you’re talking to me, you understand that reducing carbon is important to me. But beyond that, my work with Jeb is something I’ve agreed not to talk to the press about.

Q. During the 2008 campaign, John McCain had a strong position on climate change, and now there are few or no Republican presidential candidates who have put forth strong climate platforms. Why the erosion of support for this issue among conservative politicians?

A. We’re going to hear more about this issue as the campaigns move forward. Also, remember, Republicans in general don’t want to use the word “climate change” because it just attaches them too much to the Democrats. Essentially, their positions will accomplish the same things — we want to make it a better world with less carbon — but let’s not use the word “climate change.”

A. Donald’s a bird brain, alright? He’s a TV star, he’s not a realistic candidate, in my opinion. He’s, like, on a TV show! I have to laugh.

Q. Why do you think climate change has lost so much ground in the Republican Party?

A. They equate the message of reducing carbon with a total loss of jobs.

Q. Are there any other Republican presidential candidates besides Jeb Bush who you think are strong on climate change?

A. I work with Jeb — I’ve always been closely involved. I’m also supporting a group of senators who feel very strongly about carbon cutting, people like Kelly Ayotte [R-N.H.], Mark Kirk [R-Ill.], Lindsey Graham [R-S.C.], especially a guy like Cory Gardner [R-Colo.]. He’s been tough, he understands the issue. So does Chris Gibson [R-N.Y.] in the House. He’s fantastic. Those are my big two — Gardner and Gibson — who I’m working with on organizing this whole Republican push on the environment.

It really irks me that a guy like Tom Steyer, this big climate change guy, would put so much money into opposing the election of Cory Gardner. If he really cared about climate change, he would have come right behind Cory Gardner, even though Cory’s a Republican. Instead he’s focused on control of the Senate, control of the House, so much bullshitting. Most of my people at the [Center for Climate Change Law] are not conservatives.

Q. I understand that you have a particular soft spot for amphibians. How did this develop?

A. Around 8 or 9 years old, I started collecting frogs and lizards. I guess we never really grow up. For example, I spent a lot of money — well not that much, a couple hundred thousand — to buy a piece of land to preserve the largest population of timber rattlesnakes in the world.

A. Yeah, I’ve got three in my office now, three boas that were born here 25 years ago. I take in a lot of rescue animals. I love animals. I have two dogs at home, a cat, a hundred chickens, five goats, eight rabbits, five peacocks, a pig, a chameleon — I have everything. I spent $50,000 on a turtle rescue on Long Island, to take turtles that are incapable of living in the wild. They need to be caged and fed because they can’t get away from predators.

Q. You have several species named after you?

A. Two frogs, a chameleon, and a lemur.

Q. What’s next, a Sabin panther?

A. Oh, no, no. I’ve got four, that’s enough. You know, having a species named after you is probably one of the very few things in the world that you can count on in perpetuity. Buildings come and go, and all of these programs come and go. But even if the species goes extinct, your name, it’s still there.