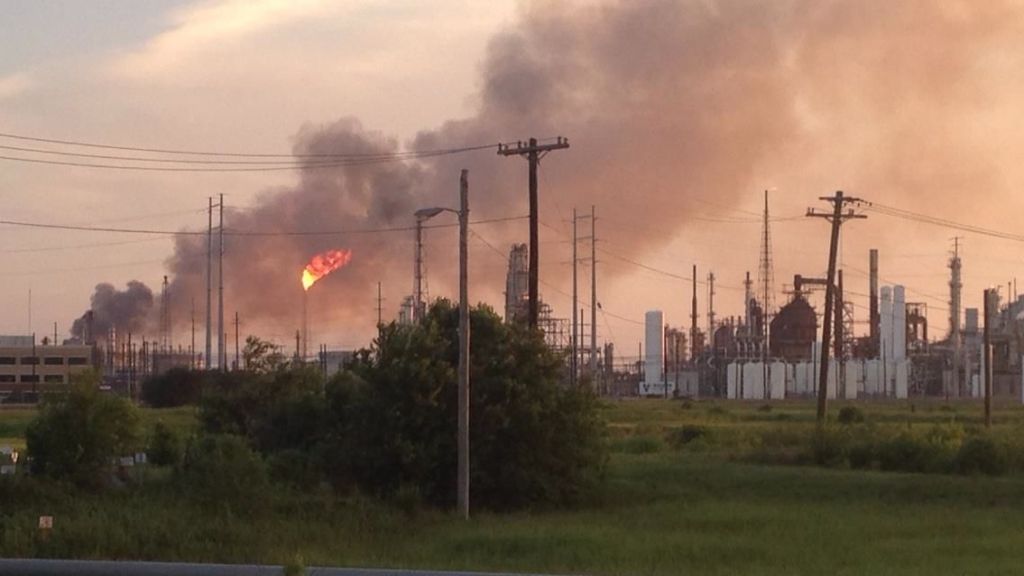 A yet-to-be-explained explosion at a Chevron Phillips chemical plant in Port Arthur, Texas, last night has the community in a bit of an uproar, judging by Facebook updates I’ve been collecting throughout the day. Chevron referred to it as a “localized fire,” in its statement to the media. Whatever the label, it injured two of the plant’s workers, and badly enough that highway traffic was stopped so a medical helicopter could come take one to the hospital.

Hilton Kelley, the Port Arthur environmental justice activist who won the prestigious Goldman Prize in 2011, got as close to the scene as possible to take pictures of the fires. “These events are very common in this community (where) thousands of pounds of dangerous toxins are released when these emission events [sic] happen,” he wrote on his Facebook page, where he posted the pics.

Kelley said that from what he could gather, one of the ethylene units of the plant had caught fire. He didn’t personally hear the boom of an explosion, but he said others in the community heard something blow out before seeing fires blaze the grounds.

“We don’t know how we’re being impacted because sometimes it’s not what you see and smell, but what you don’t see and smell that’s most toxic,” said Kelley.

The Chevron plant sits in the westside of Port Arthur, where most of the low-income, black population resides. There was once a public housing community close to the plant, but it was torn down a few years ago. Still, there are people living in homes in close proximity to Chevron’s fencelines. The map below shows that Roosevelt Park and a playground are right next to it.

Investigators are still looking to determine what caused the fire from last night. Meanwhile, Kelley has already filed a complaint with the Texas Department of Environmental Quality. A fire broke out at the same plant last year in April, injuring eight workers.

When the smoke clears from this incident, Kelley and the Port Arthur community will still have other pollution problems on their hands. Besides the pollution cluster that already exists there, and the planned terminus for the Keystone XL tar sands pipeline, Kelley said the city just took a contract to take in chemical weapons waste from Syria. A few years ago, Kelley was instrumental in stopping tons of waste from Mexico from coming into the city to burned off in a city incinerator.

“Most communities around the world don’t want this waste but we’re taking it here in Port Arthur,” he said .